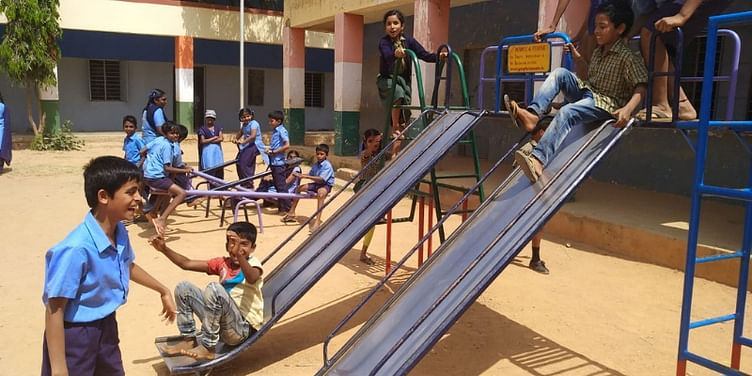 People4People, which was started by a couple who were professors at Yale University for 10 years, has enabled students of over 300 government schools across India to enjoy uninhibited playtime.

Children at the government school in Bekkare village near Periyapatna in Mysuru can be seen gleefully hopping around in their newly-built playground.The kids generally step out to get a sniff of fresh air whenever they get a break in between their class. From climbing and jumping to swinging and sliding, they indulge in all kinds of activities in the playground. This was made possible by People4People, a trust fund, which recently constructed a playground in the school.

“Earlier, children would not even get out of the class because all we had was a small patch of barren land within the campus for them to play. We were not able to gather funds to buy play fixtures. In 2017, People4People installed several play equipments like see-saw, swing, and slide. Ever since, I have seen a lot of excitement and joy on the faces of the children,” says Vishu Kumar, Headmaster, Government Higher Primary School at Bekkare, Mysuru.

According to a report published by the Ministry of Human Resource Development in 2016, four out of every 10 schools in India do not have a playground. This shows that children are deprived of basic infrastructure in schools, affecting their playtime, and do not get an opportunity to improve their cognitive, social, and motor skills.

People4People has been putting in an effort to ensure children do not miss out on outdoor activities. The trust has sponsored the construction of playgrounds in 306 government schools across towns and cities.

Some of the schools that have benefitted from the organisation include Lakshyam School at Sahibabad in Delhi, Mandala Prathamika Patashale at Ranga Reddy Jilla in Telangana, and Government Higher Primary School in Nagapattinam.

Also read: How Teach for Change is transforming the lives of children across India by focusing on literary and life skills

People4People was started by Dr Sunita Maheshwari and her husband Dr Arjun Kalyanpur in 2007. Prior to this, the duo was teaching at Yale University for almost 10 years.

The founders say parks and playgrounds in the US were free, accessible, and open to all throughout the day. But, when they returned to India with their three-year-old daughter, they observed that apart from a few parks, private clubs, and apartment complexes, there were hardly any playgrounds in the country.

“That scenario got us thinking. If it was so hard for our children to have access to play equipment in cities, what must it be like for children from economically weak backgrounds. That was when we decided to set up People4people with a goal to provide playgrounds to government schools. Being a paediatric cardiologist myself, I loved seeing children playing merrily in playgrounds and developing a healthy and active lifestyle,” Sunitha says.

Right from preschool all the way through the end of high school, a playground is one place where children yearn to spend a major chunk of their time. Going out and playing is not only a fun activity but helps improve reflexes and eye-hand coordination. Equipment like swings, slides, and climbers encourage children to develop their balance, speed as well as agility.

“Several government schools in India have a lot of unused land, but no resources to construct playgrounds. People4People was started with a mission to fill this gap. We started the initiative of sponsoring play equipment to these schools in 2007, and since then we have covered over 300 campuses. The excitement of the children when they see colourful play equipment in their school is indescribable. There have been instances where they started climbing the slides even before the paint was dry,” says Sunita Maheshwari, Founder Trustee, People4People.

Prema Kumari, Headmistress, Government Lower Primary School at Nandagudi in Hosakote, Bengaluru, says she has seen an increase in school admissions after People4People made it possible for them to build a playground in 2016.

“The number of children who approached the school for admission went up by 17 percent. This can be attributed to the school having a play area with all kinds of equipment. I am very thankful to People4People for making this possible,” Prema tells YourStory.

A peek into the trust’s operations

People4People started its operations at government schools in Whitefield and Hosakote localities of Bengaluru. After this, it started spreading its wings across other parts of Karnataka before going pan-India.

The founders say the trust has a method in place to identify the government schools that are in genuine need of a play area. Before taking up the installation, a few volunteers visit the school to validate the need and assess the commitment to maintain equipment.

People4People takes complete responsibility when it comes to installation of the play equipment, while production is outsourced to vendors. “The equipment for the playground is outsourced to certain vendors who are selected based on parameters like track record, financial background and technical capabilities. The vendors take care of everything – right from design to commissioning,” Sunitha tells YourStory.

People4People receives an average of Rs 25 lakh every year from group companies like Teleradiology Solutions, RXDX clinic, and organisations like Wonderla, Bangalore Club, and individual donors. This enables the trust to sponsor play equipment to government schools at free of cost.

“People4People took care of sourcing as well as installing the play equipment in the school. We had to pay only for the transportation of the equipment, which amounted to Rs 6,000. The rest of the cost, including the purchase and installation of fixtures, came up to Rs 90,000, and was taken care of through the funds raised,” says Prema.

Every child, poor or rich, deserves to enjoy some playtime. While organisations like People4People are doing their bit to make this come true, the involvement of local communities in terms of creating an awareness and raising funds for this cause is sure to help.

Why we must work towards peaceful coexistence with the urban wildlife