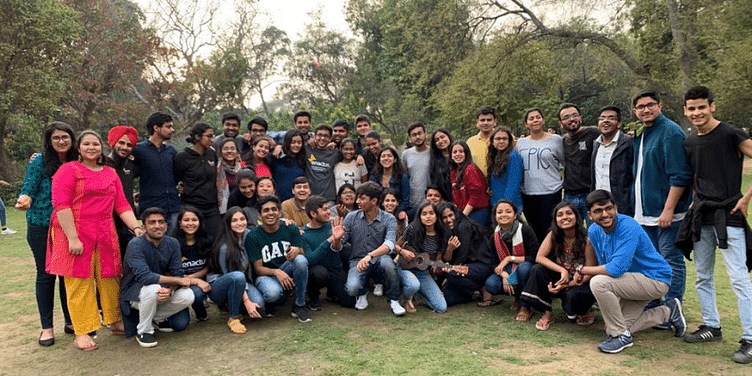 Through Project Virasat, the students of Shri Ram College of Commerce are on a mission to preserve the traditional craft of making copper and brass utensils by the Thatheras of Jandiala in the Amritsar district of Punjab.

The cultural heritage of India is embodied in its handicrafts and preserved over centuries by artisans. However, with the introduction of mass production methods and lack of financial incentives for craftsmen, several forms of art and craft are facing the danger of extinction in the country. According to a report published by the National Informatics Centre (NIC), 35 Indian crafts are facing the risk of dying out.

The ‘thatheras’, located in the town of Jandiala in Amritsar district, Punjab, are known for their skilful technique to craft utensils like katori, karahi, and patila. Their artistry is the only Indian craft to feature in the UNESCO list of Intangible Cultural Heritage.

Also read: How this online handicrafts marketplace is eliminating middlemen to ensure artisans get most of the proceeds from sales

Despite this recognition, the thatheras have been striving to continue with their occupation in the last few years. Irregular wages, poor working conditions, and lack of financial resources have been forcing them to shift to other professions.

Of the 300 artisan families, only three or four remained in the field until a group of students of Shri Ram College of Commerce (SRCC) Delhi stepped in. They launched ‘Project Virasat’ as part of an international non-profit organisation, called Enactus, the sole objective of which was to revive the dying art form of the thatheras.

“Right from conducting surveys and undertaking research to mobilising all the artisans and providing them with lucrative demand avenues, we took many steps to improve the welfare of the thatheras. In a span of two years we were able to bring about an increase in their revenue by around 300 percent,” Ankita Punjani, a volunteer for Project Virasat, SRCC tells YourStory.

The thatheras possess a legacy that can be dated back to over 200 years when the town was established as a colony of craftsmen during the reign of Maharaja Ranjit Singh. Sadly, their legacy could not stand the test of time. Many artisans failed to earn their daily bread and butter due to competition from steel and aluminum products, inadequacy of working capital and exploitation at the hands of middlemen, commonly known as Kasariyas.

“When we went to the quaint little town of Jandiala we could hear the melodic sounds of utensils being hammered through the day. But, amidst all the clamor, we observed that the craftsmen were not receiving the rewards of their hard work. The cost of making the utensils turns out to be around Rs 400 per kilogram. However, the craftsmen were being paid a miserly daily wage of Rs 20 to 40, while the selling price of the product in the market is between Rs 500 to 540. That was when we decided to intervene and help them by kick-starting Project Virasat in 2017,” Ankita recollects.

Over 50 students from SRCC unified all the artisans of the community and guided them to form a self-help-group (SHG).

“A lot of the utensils the thatheras used to make were outdated, like the parath, and the handi. Hence, I made small modifications to the already existing vessels to ensure they are more useful and contemporary. For instance, instead of carving traditional bowls, I designed a bowl with a larger base specifically meant to eat nachos. These design interventions increased the marketability of the commodities to a great extent,” says Kirti.

In order to infuse more capital for the thatheras to buy safety equipment, welding tools, and other raw materials, the students reached out to Navjot Singh Sidhu, the Tourism and Culture Minister, Kamaldeep Singh Sangha, the District Collector of Amritsar, as well as Shiv Dular Singh, the State Tourism Director. The trio together announced a corpus fund of Rs 10 lakh for the revival of the art form.

Marketing is the most important element to generate sales and garner revenue. As part of Project Virasat, the students created a brand for all the utensils made by the thatheras called Punjabi Thathera Art Legacy (P-TAL).

“We helped the thatheras tie up with store owners and set up six to seven retail outlets across different locations like Delhi, Chennai, Amritsar, and Gurgaon. We also launched a website for their utensils to be displayed and sold online. Besides this, the students made it possible to exhibit their work at trade fairs like the Jaipur Festival and the India Trade Promotion Organisation at Pragati Maidan. These measures are a step towards enhancing the livelihood of the entire artisan community,” Ankita notes.

The students have also employed a person to take care of the logistics and supply on a regular basis. All the revenue that is collected after selling the copper and brass utensils is reinvested to purchase raw material after distributing a fair share of it to the thatheras. They now receive close to Rs 9,000 as compared to a few years ago when they used to get a meager Rs 2,500 in hand.

Also read: How to empower more people in rural India? These organisations show the way

“Project Virasat has made a huge difference to my day to day sustenance. The students have helped me buy better tools and resources because of which I have been receiving a consistent and increased amount of income in the last few months. Now, I am in a position to feed my family well,” says Babbu Bhaiya, a thethera in his late sixties.

Development of contemporary designs, provision of capital, and expanding sales avenues of the utensils has put the craft of the thatheras on a path of revival. “The students have been very passionate towards the cause and I am proud of them. Eight families have got back to their traditional occupation of carving utensils in the last two years because of the efforts put in as part of Project Virasat. This seems like a move in the right direction to preserve the art form now, and for the generations to come,” says Priyanka Bhatia, Faculty Advisor, Shri Ram College of Commerce.

How this IAS officer is making Madhya Pradesh disabled-friendly