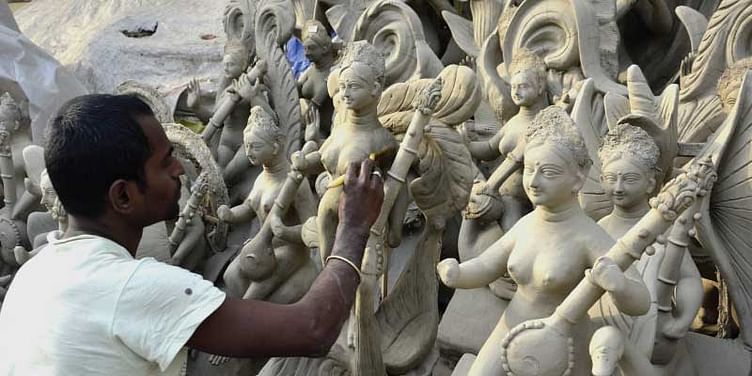 With the livelihood of artisans across India taking a hit due to low demand, lack of market opportunities, and exploitation by middlemen, here are some expectations the handicrafts sector has from the new Narendra Modi government.

A Shanti is a 52-year-old potter residing in the quaint village of Kuniyur, in the Tirunelveli district of Tamil Nadu. She and her husband have been striving to sustain their art form of making mud pots for several years. They together earned a paltry Rs 140 a day, which was insufficient to feed their family of two sons.

“Pottery has been my family occupation. I wanted to grow the business by building on the foundation laid by my ancestors. However,  of late, with changing times and challenges like natural disasters and a shortage of clay, earning my livelihood through pottery has become extremely difficult,” she says.

This is the deplorable state of most of the artisans in India, though the country has a rich and diverse history of art forms, with many traditional crafts embedded as a culture among rural communities. Be it the intricately woven ikat from Andhra Pradesh and Odisha, the boldly carved wooden toys from Channapatna in Karnataka, or the geometrically designed Sholapith idols from West Bengal.

The art and handicrafts sector is the second largest employment generator after agriculture. According to the 2011 Census there are over 68 lakh artisans in the country, of which 55 percent of them are women.

Despite this, the country contributes to a meagre two percent to the global handicrafts industry, while China stands at 30 percent. Philanthropic organisation Dasra suggests that the number of artisans has been dwindling rapidly in the recent past. The National Informatics Centre attributed the dire state of the handicraft industry to inaccessibility of funds, low penetration of technology, absence of market intelligence, and poor institutional framework of artisan groups.

Recognising the constant struggle of artisans to sustain themselves, the Central government launched some initiatives to promote their work during its previous tenure. A Trade Facilitation Centre and Crafts Museum was set up in 2014 at Varanasi to bring weavers and artisans under one roof and provide them with a platform to indulge in marketing activities.

Also, A Scheme for Promoting Innovation, Rural Industry and Entrepreneurship (ASPIRE) was started in 2015 to fuel the creations of startups and cooperatives in this space. In 2016, the Madhya Pradesh government started a periodic marketplace in metropolitan cities and overseas markets known as Gramin Haat.

However, the progress made thanks to these programmes was nominal. Now, the NDA government has made fresh promises for its upcoming term - a scheme dedicated towards skill development and artisan welfare. Yet, several organisations and individuals believe that there is an urgent need to invest more to improve the livelihoods of Indian artisans and preserve the value of our art forms.

How this online handicrafts marketplace is eliminating middlemen to ensure artisans get most of...

The earnings of many artisans took a hit when the Goods and Services Tax (GST) was implemented in 2017. For instance, artisans need to buy chipped or sawn wood by paying 18 percent tax, but the carved and processed wooden item would cost the consumer only five percent.

“The five percent GST has been eating into the profits of the artisans. Besides, since a lot of these artisans belong to financially poor backgrounds and do not hold an educational qualification, they have not been able to understand and comply with the new regime. This has become an added burden. Hence, if the government exempts the handicraft sector from GST, it will be a huge sigh of relief.”

A large share of the art and craft products made in India are sold in local or regional markets. Artisans get very few opportunities to sell on retail platforms such as departmental stores and shopping malls.

To increase their visibility, the government launched the 'India Handmade Bazaar' in 2017, an online portal for direct market access to weavers and artisans. Craftsmen could use it to list their products for users to view and place orders. While this initiative is yet to scale up, the handicrafts sector is looking for more exposure.

Ihitashri Shandilya, CEO of MITHILAsmita, which works for the promotion and welfare of rural artisans and crafts, says,

“The corporate gifting industry in the country has been growing at a rapid pace over the past decade due to the rising income level and aspirations of people. If this space is redirected to artisans with proper government policies and subsidies, it will give a great boost to the industry as a whole.”

Another aspect that calls for attention is the production and influx of duplicate items in the market. Since it is difficult for consumers to differentiate between traditional handmade and machine-made products, they often land up buying the latter. This, in turn, affects the livelihood of artisans actually crafting them.

“It would really help if the government creates checks for authentic handmade items by awarding GI tags to art forms like Madhubani, Kalamkari, and Worli, and take punitive action against all violators attempting to make replicas,” Ihitashri says.

Although middlemen are necessary to enable effective market linkages, they often, if not always, exploit artisans by paying them only a fraction of the fair wages. This may be due to a lack of awareness about true manufacturing costs on the part of the middlemen, or because they want to grab a bigger share of the profits.

“The handicraft sector can definitely escape from the trudges of middlemen if social enterprises and governmental institutions join hands to establish direct links between artisans and end consumers. Additionally, there needs to be a support system to aggregate and store handmade products from rural areas so that they can be sold in cities,” Rohit of ASHA explains.

Back in the mid-nineties, the handicrafts sector in India used to be a flourishing space characterised by patronage. Unfortunately, the demand for art and craft has diminished. This may be due to the availability of modern machine-made products that are not only cheaper, but also durable.

Between 1995 and 2010, the number of handloom workers and artisans has decreased by 20 lakh. How can this be reversed?

“Formation of public-private partnerships is key to revive this sector. It would be great if the government initiates and supports these collaborations. Also, the need of the hour is to get together and organise dedicated programmes for skill development, market research, and product enhancement focused on the art and craft space,” she explains.

It is not only about the government that can help. You can pitch in too. The next time you go shopping for gifts, look around for some handmade products for your loved ones. This could be the first step towards recognising the skill and effort of artisans.

Elections 2019: what leaders from the social sector aspire from the NaMo government