These organisations and individuals are uplifting the lives of underprivileged children 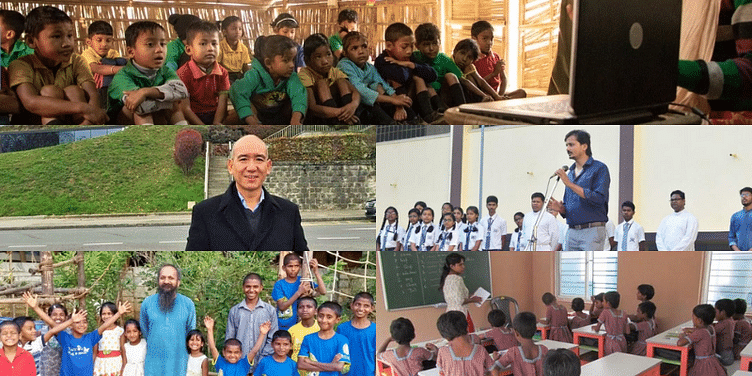 These stories tell us how individuals and organisations are doing their bit to secure the future of young children, from starting a school for young children in West Bengal to a school that accepts plastic waste as school fees.

According to national report, India is home to 19 percent of children in the world. At present, the country has over 472 million children, among whom more than one million are homeless.

With no basic facilities like food, shelter and education, most kids end up being trafficked for various reasons such as labour and sexual exploitation. And according to the National Crime Records Bureau, as many as one child is trafficked in India every eight minutes.

From helping children of migrant labourers to instilling traffic sense and good value in children, many individuals and NGOs have come forward to help the children in need.

Here is a list of such organisations and people who are championing the cause of our children:

Migrant construction workers are a common sight in most cities today. They leave their towns and villages in search of better employment opportunities and for money. However, children of these workers are often ignored at construction sites, and very often the older children end up taking care of their younger siblings. This leaves them no room for education and other learning opportunities.

Addressing this issue is Amar Daniel Gibran, who founded Ananda Sagara in 2014. Today, the organisation is catering to a group of 16-20 children. It provides children of migrant construction workers with basic amenities such as toilets, and a proper source of nutrition, which is mostly inaccessible to them.

In addition to this, children are also taught about basic hygiene practices such as starting their day by brushing their teeth, washing their hands with soap before eating their meals, and maintaining hygiene while using toilets.

How this NGO is working to make learning fun and help underprivileged children unleash their po...

According to a report by the UNESCO, around 900 million people globally cannot read or write, and 287 million or 37 percent of that population are Indians. This shows that most of the country's population, despite education being a fundamental right of every citizen, do not have access to basic education.

While we think of solutions to fix this problem, the Jhamtse Gatsal community in the remote village of Mago, Arunachal Pradesh, is creating a holistic environment for children.

Founded by Lobsang Phuntsok in 2006, the community creates and instils the value of humanity in children, and provides them with free education as well.

Besides, it also has various projects like Project Earth, an initiative undertaken by the students of Class VI to XII to achieve a zero-waste community. The children also carry out deep cleaning in their surrounding areas following the 4R method – recover, reuse, reduce, and recycle.

Jumping the red signal has become a common sight on Indian roads. According to government data, about 4,64,910 road accidents were reported in India in 2017 alone. This means 405 injuries, and 1,290 deaths every day.

With these numbers causing concern, many organisations, along with the government, are trying to instill the importance of following traffic rules in people.

Addressing this issue is Rise Up, an organisation led by Rishab Anand, which is conducting workshops on road safety in schools and colleges. Since its inception in 2016, Rishab’s playschool, called the Cartoon Playschool, teaches children about road safety and traffic rules, and has covered 250 colleges and schools till date.

A school run by a couple in Guwahati, Assam, is uplifting the lives of underprivileged kids, and also instilling a sense of being eco-friendly.

Founded by Parmita Sarma and Mazin Mukhtar in June 2016, Akshar School now has a strength of around 100 students from four to 15 years of age. It is funded by the Indian Oil Company.

Charging ‘dry plastic waste’ as fee, the school also instructs students to deposit at least 10 to 20 plastic items per week, and pledge to not burn the plastic. This initiative is an attempt to curb plastic pollution, and create awareness about the harmful effects of burning it.

A beacon of hope for underprivileged kids

Piali is a small remote village located in the south of West Bengal, which is notorious for being a crime hub. From illegal arms trade to trafficking of young girls, the village is no place for young children. Besides, it is also infamous for its child marriages.

But over the past year, things have changed for good. Piali has now turned into a haven for all the young girls, thanks to Anup Gayen (45) and Mojca Gayen (38). The couple has been determined to change the face of this crime village into a haven for young girls.

Today, this school has over 160 girl students from nursery to Class VIII, and most of them come from broken families, with alcoholic fathers and estranged mothers.