Ayush Mittal is sparing no effort to collect, manage, and discard waste scientifically in his hometown, Meerut, in Uttar Pradesh. Having quit his job to start the Swachh Meerut initiative, he is now on a mission to make India a waste-free nation.

Mahatma Gandhi said, “Sanitation is more important than independence”. The Father of the nation made cleanliness and sanitation an integral part of the Gandhian way of living. His dream was total sanitation for all.

But today, we can see mounds of garbage dumped in every nook and cranny in India. The country is known to generate a whopping 62 million tonnes of solid waste every year, of which less than 60 percent is collected and only around 15 percent of the waste is processed. Unattended waste can lead to many diseases like cholera, dengue, hepatitis, and others.

Despite the government putting in efforts to design policies and the local administration attempting to manage the disposal of waste, not much has changed in the last few years.

But a 25-year-old lone ranger from the city Meerut in Uttar Pradesh is keeping the Gandhian principles still alive. Ayush Mittal is sparing no effort to collect, manage, and discard waste scientifically in his area. He came up with a model to manage solid waste efficiently with the help of his brother, Akshit Mittal, in 2018.

Today, Ayush has successfully roped in over 118 waste pickers to manage around 8,000 kilograms of solid waste generated across 10,000 households from 17 residential colonies.

Meet Ashwani Aggarwal who is building eco-friendly low-cost urinals in Delhi made from single-u...

After completing his MBA from IMS Unison University in Dehradun, Ayush bagged a lucrative job at Accenture, a multinational services company based out of Delhi. However, things took a turn when he took a break from work and arrived at his hometown, Meerut, in 2018.

Here, he noticed the amount of trash that was left unmanaged with the municipality.

“Every other morning, I used to notice a lot of undisposed waste polluting the air and groundwater in and around the city. When I peered into the issue, I got to know that there were nearly 1,000 unregistered landfills in Meerut. I became quite upset and could not digest the fact that this was the state of India even after five years of the implementation of ‘Swachh Bharat Mission’. Hence, I decided to take action,” recollects Ayush.

Ayush started the Swachh Meerut initiative along with his brother, who is an architect by profession. They together built a model to manage waste in accordance with the Solid Waste Management Rules, 2016.

Ayush initially started talking to a few citizens in residential colonies to find a solution to the existing problem. After doing a lot of research, he came up with a framework to engage all the waste pickers to manage solid waste with an assurance that they would get a fixed pay and better working conditions.

The model not only proved to be effective but also self-sustainable, since the entire operation was funded by the users, i.e., the households themselves in the form of a small fee. Two residential societies - Melford City and A2Z Apartment – also agreed to provide land within their yards to set up the composting facility.

Ayush also pooled in a sum of Rs 55,000 to fund the operational expenses in the initial phase.

Meet this engineer-turned-social activist who is making Uttarakhand a ‘Swachh’ state with his s...

Ayush’s Swachh Meerut model is based on a simple door-to-door waste collection system. Since the waste is segregated at the source itself, the wet waste is directly transported to the composting facility where it is turned into compost using aerobic composting pits and vermicomposting beds. The dry waste, on the other hand, is sent to recycling units for further processing.

“All the maintenance costs as well as the pay for the waste pickers month is funded by the households by contributing Rs 85 per month, thereby making the model self-sustainable and functionable. This system is completely citizen-driven, it is neither dependent on government nor local corporations,” quips Ayush.

Since its inception, approximately 12,000 kilograms of wet waste and 41,000 kilograms of dry waste has been collected as part of the Swachh Meerut initiative. All the compost that is churned out at the processing facility were used for organic farming or planting trees within the boundaries of the residential society.

“So far, more than 2,800 plants have been planted using the compost generated as part of the initiative. Not only does this decrease greenhouse gas emissions, but also helps mitigate climate change. This is not all. The model has several un-quantifiable impacts like better health of citizens as well as promoting a greener and cleaner environment,” notes Ayush.

“The Swachh Meerut initiative is highly effective. All we did is gave them a designated place for making composting pits and setting up a dry waste collection centre. Today, we are reaping multiple benefits – right form saving water, recycling all our waste, and planting trees. If this model is replicated in other residential areas and colonies, the day is not far off when people can get to see a waste free country,” he says.

Ayush is now planning to scale and promote the Swachh Meerut initiative across the country.

These two brothers from a village in Haryana are converting cow dung into biogas to power their... 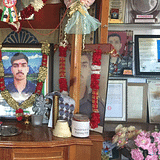 20 years since Kargil war, these 527 young martyrs still live on