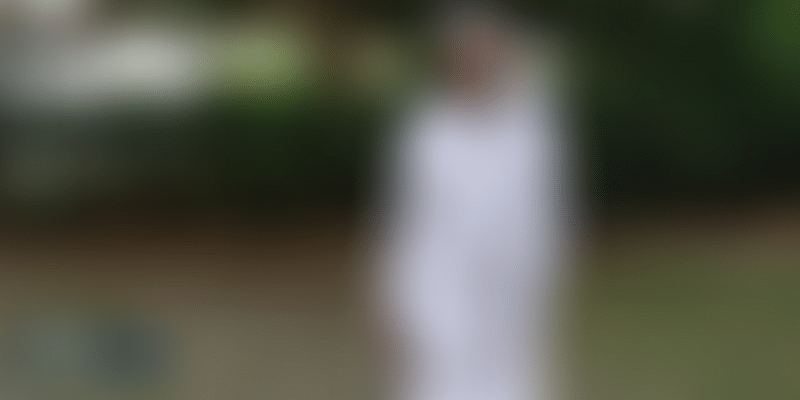 For the past five decades, Narayanaswami Iyer has been teaching Mathematics to students of all ages and disciplines, even while being a full-time working professional. He believes age is just a number and everyone must do whatever they can to make a difference.

Seventy-seven-year-old Narayanaswami Iyer is clearly surprised when I reach out to him to talk about his life and work. “Oh, you want to write about me? But I am no Narendra Modi or Abdul Kalam. I am just a humble teacher,” he says.

I assure him that, whether he believes it or not, spending an entire lifetime teaching Mathematics to thousands of students indeed makes for an inspirational story. When I say the word ‘Mathematics’, it’s as if his words come to life, and the conversation begins on an interesting note.

During the course of the next hour, he keeps asking me if he is boring me or taking up too much of my time. I reply in the negative, for, this conversation, as it turns out, is replete with more than just information for an article. It is filled with nuggets of wisdom and experience and the life-affirming belief that age is just a number for this ‘young man’ of 77 years.

Every week day is the same for him. He has breakfast at 7:30 am sharp. By 8am, he is ready, in a neatly ironed white-collared shirt paired with his favourite veshti along with a vintage briefcase. He is all set for his morning Mathematics classes at the nearby Maruti Vidya Mandir school. This is an honorary job that he took up after his retirement to continue indulging his love for teaching mathematics. After spending three hours there, he returns home for lunch and rests. In the evening, he conducts classes for rural children at the Maruthi Educational Trust for another three hours. It’s a routine he loves, right down to the last class.

“Age is just a number,” he tells me, adding, “You are as young as your mind tells you. I wouldn’t like to spend my life any other way.”

After completing his primary studies in a small village in Thanjavur district, Narayanaswami moved to Trichy for secondary education and college. After completing his BTech in electric engineering, he landed a job at Binny Mills in 1966. This was also the time when his tryst with mathematics and teaching began.

“As a bachelor, I had a lot of free time after I returned from work in the evenings. A lot of staff in the company was struggling to complete their AMIE, as they found engineering-related Mathematics tough. I started taking classes for free,” he recounts.

A lifetime of Mathematics

After a year, he moved to Bengaluru and took up a job at Indian Telephone Industries Limited (ITI), where he worked until he took voluntary retirement in 2000.

“While staying at the ITI colony, I started taking classes at the Science and Technology Association for the company employees. Later, I joined as faculty at BMS College of Engineering, then the ICWAI, the Institute of Engineers, Bengaluru Chapter, and the Institute of Telecommunication Engineers, all for teaching Mathematics and related subjects. This continued till I left my job in 2000,” he says.

Narayanaswami goes on to share an interesting story about how Mathematics has an impact on everyone’s life, which may be positive or negative. He narrates, “When I was building my house in Bengaluru, there was a young carpenter, Arumugam, working as an apprentice. One day, he told me, ‘Sir, I see so many people sitting at your table and learning mathematics. This subject has caused me untold misery in life. I was bad at Maths in school and my teachers would hit me. When I came home, my parents would hit me for not doing well in the subject. One day, frustrated, I packed a few clothes and got onto a train. The next day, they told me I had reached Bengaluru. I started running, but fainted because of hunger. A kind carpenter Muniswamy took me home, fed me, raised me and taught me the craft. I am here only because of Mathematics.’”

When I ask him about his approach to teaching, he counters that the question is more difficult than solving a differential equation. But, he believes, how you approach the subject can make or mar a person’s interest in it. “When I don a teacher’s role, I become very strict. I don’t like students missing my classes. Come rain or shine, I would be present on all weekends and also holidays,” he adds.

To reiterate this commitment, he recounts an interesting experience with one of his students. “There was a 28-year-old woman called Annapurna in my class, who had failed four times in Mathematics in the AMIE exams. Before writing it for the fifth time, she decided to attend my classes. One day, she came and told me that it was going to be her first Diwali after marriage and she would not be able to attend classes on that day. I refused to cancel my classes and instead asked her to invite her in-laws over from Hyderabad. After a lot of back and forth, her in-laws came over, she attended classes, though with a small break when we burst crackers and distributed sweets in the spirit of the festive season. She also passed the exams.”

Continuing despite the odds

In 2000, after his retirement, Narayanaswami wanted to move in with his children who were in the US and Singapore. “I stayed in the US for a year but got bored. I felt I had to return and continue doing what I am best at.”

In 2018, he had a fall and was diagnosed with low bone-density. He continues to take an injection every day for the condition. However, this has not stopped him from following his daily routine. He assures me that all is good, and he is fit to do what he loves.

Narayanaswami believes it’s important to keep going, at any age. “I do whatever I can to help others and make a difference in their lives: help people do their transactions at the bank nearby, buy medicines for those in need, and other small voluntary work. For all these, I have the complete support of my wife and children.”

In wrapping up our conversation, he tells me of an incident that occurred when he moved from his school in the village to one in the city, which changed his life forever. “My Mathematics teacher, Mr Pichumani Iyer, conducted an exam in which I scored a centum. He gave me eight annas as a reward, and told the class how well I had done despite coming from a village school. I still have those eight annas with me, and cherish it more than any amount of money I have made in my life.”

This teacher is leading a silent revolution to transform primary school education in Maharashtr...