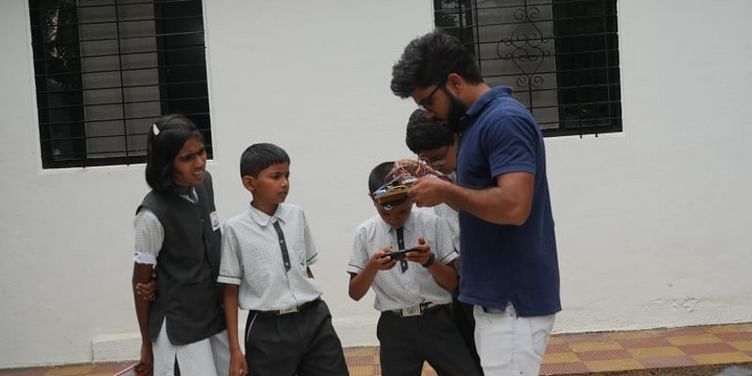 In India, government schools have always been neglected or under estimated. They are seen as overcrowded, shabby, under-equipped, and poorly funded.

While this scenario mostly holds true to a large extent in many parts of the country, a primary school in Maharashtra has come as close to being an ideal school with its various facilities to feed the curiosity of its students.

Located 45 kilometers away from Pune, Wablewadi Zilla Parishad School, run by 43-year-old Dattatray Ware, has classes up to ninth standard, with about 530 students and a team of teachers.

In a conversation with Deccan Chronicle, Dattatray, who was transferred to the school in 2012, said,

So, what makes this school different from the rest? It is the school’s unique model which makes use of new technologies like artificial intelligence to help students learn robotics, animation, sound engineering, music, video editing, recording, and much more, The Logical Indian reported.

According to Deccan Chronicle, the school, now known as the International Ojas School, will follow the international curriculum of the Maharashtra International Education Board (MIEB).

This was possible due to the support gathered from the International Association for Human Values (IAHV), a sister organisation of The Art of Living, which also roped in global investments company BNY Mellon for further support.

Dattatray also started improving the pre-primary section by bringing activity-based learning. He also met parents to acknowledge them the importance of quality education and convinced them of contributing to the school’s development.

Speaking on the same, Dattatray said,

“Now, if these young talents want to become scientists, environment experts, social workers, photographers or robotic engineers, they can move ahead. Their backgrounds or where they live do come in the way of them getting a chance at making their future”, The Logical Indian reported.

At present, the school has a science and a computer lab, which can be converted into a music room, and has a library as well. The donation has helped set up a solar energy panel to meet the basic electricity needs, and also has a Wi-Fi connection in the school premises.

“The course is to prepare children for these competitive exams. The hope is to help at least 40 children from this school get into good colleges”, Deccan Chronicle reported.

To help students learn better and have an innovative approach, the school has an indigenous project, called ‘Project Avishkar’, which focuses on exploring and nurturing a child’s creativity, critical and analytical skills. Within this, the teachers have chosen 10 models, which includes robotics, 3D animation, sound engineering, languages, arts and music, to name a few.