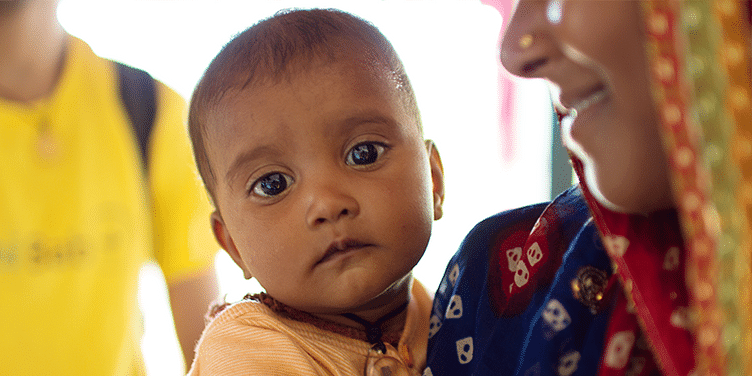 Founded in 2014, Udaipur-based Khushi Baby is using NFC-enabled wearables to improve monitoring of antenatal and neonatal healthcare, and reduce infant mortality rates. Currently operational in 400 villages, the NGO has benefited 40,000 mothes and infants.

Infant mortality remains a socio-medical issue of major concern in India. According to media reports, 802,000 infants died in 2017 alone. The states of Uttar Pradesh, Madhya Pradesh, Rajasthan, and Bihar see more than half of the total newborn and under-five deaths in the country.

According to a Unicef Study, the major reasons for newborn deaths in India are premature or preterm pregnancies, which account for 35 percent of infant deaths. Neonatal infections (33 percent), intra-partum-related complications / birth asphyxia (20 percent), and congenital malformations (9 percent) are among the other leading causes.

Medical experts believe that improving the quality of care, both during birth and after delivery, can prevent most newborn deaths.

In 2018, 116 million children were immunised against diphtheria, tetanus, and pertussis (DTP). Yet, millions of others fail to receive potentially life-saving vaccines, reports another Unicef study.

NGO Khushi Baby was started in 2014 in Udaipur, Rajasthan, by Ruchit Nagar and Shahnawaz to mitigate infant mortality through improved monitoring of antenatal and neonatal healthcare.

Says Ruchit, Co-founder and CEO of Khushi Baby, who is now a final year MD student at Harvard Medical School,

“Our initial goal was to improve data and accountability of immunisation services. We wanted to develop a reliable health record platform. People could use this when approaching any health provider, who would immediately know a child's vaccination history and be able to give the correct vaccine at that point in time.”

Ruchit adds that though such medical record keeping is possible with paper-based solutions too, often they are not maintained properly. Hence, Khushi Baby was started with the aim to provide a digital solution.

The birth of Khushi Baby

What started out as a classroom project has today grown into a full-fledged NGO. The inception of its solution was at Yale, where Ruchit did his undergraduate and postgraduate studies in fields related to global and public health.

“Khushi Baby was born out of a classroom project back in 2014. The study’s aim was to develop solutions to address the immunisation gap globally and come up with technology to bridge this and help people in the most remote villages,” Ruchit recalls.

He was then connected to Shahnawaz, a doctoral student at IIHMR-Jaipur at the time, through a mentor. After receiving $25,000 in seed funding through the Yale Thorne Prize for Social Innovation in Health, the duo decided to launch their NGO.

In collaboration with partner NGO Seva Mandir, Khushi Baby’s vision was to prevent infant deaths and to create awareness among mothers about the importance of antenatal care and regular vaccination.

In order to bridge the gaps in monitoring maternal and neonatal healthcare, the NGO team came up with near-field communication (NFC)-enabled wearables that can record the health status of babies.

How the digital pendant works

“When we first built the technology, we didn’t know what form the NFC technology should take. We had different options like a wristband, bangle, stickers, etc. We asked ourselves: what can be easily used by local mothers and caregivers?”

Noticing that the women of the region customarily wore ornaments, they decided to embed the NFC technology in everyday wearables. The Khushi Baby team then designed the small, durable, and waterproof pendants, taweez, and other wearables, and also developed a mobile app.

The technology enables healthcare professionals to easily access a baby’s medical records and track the due dates for vaccinations by scanning the pendant with the app. Doctors and nurses can view the status and accordingly treat the child.

The app also allows the professional to update the health status. If the baby is unable to get a vaccine because of sickness or due to limited stock, these details too can be saved on the app. This feature enables follow-ups by nurses that ensure the vaccine is given in the correct time window.

According to statistics collected by the NGO, there are 15 lakh pregnancies every year in Rajasthan, against a total number of 2.5 crore in India.

“In Udaipur, where we work, about 40 of every 1,000 children die before they turn one. We are trying to bring this statistic down. We are looking at the infant mortality rate and maternal mortality rate,” Ruchit says.

The biggest challenge for the NGO initially was working alongside the government, as Khushi Baby was perceived as an outsider and wasn’t trusted to stick around.

“But we managed to show that we could in a matter of just one year. The government managed to see that we were authentic and ready to work, and we gained its trust. We worked from the bottom up, and this took a lot of grit and dedication,” says Ruchit.

Khushi Baby now has a core team of 23 members, 12 of whom work as field monitors, while the others’ focus areas range from public health medicine and data science, to engineering, design, and operations.

Some of the partners who have come on board over the years to support Khushi Baby are Unicef Innovation, Gavi Vaccine Alliance, Yale University, Harvard innovation Lab, and Safran Morpho.

How this 22-year-old is providing free supplementary education to children in villages of Tamil...

Hamid, an employee of Khushi Baby who works closely in the field with villagers in Rajasthan, says the team’s digital solution has benefitted new mothers to a large extent. He explains,

“We have looped in anganwadi workers who save the numbers of parents, who then get a call in their regional language alerting them about the date and time for their child’s vaccination. They can then go to the appropriate health centre and get the vaccine.”

The NFC technology helps both anganwadi workers and parents to keep a tab on check-ups and plan for following ones. When the pendant is in close proximity to the smartphone, the data automatically shows up on the app.

Hamid says if a parent loses the pendant, anganwadi workers get them a new one with all the data restored.

To date, Khushi Baby has managed to reach 40,000 mothers and infants.

“We have additionally started to track 1.4 lakh couples in various stages of pregnancy. According to our study, of over 32,00 mothers over a period of three years, we have improved immunisation rates by 12 percent, and decreased infant malnutrition rates by four percent,” Ruchit points out.

Currently, the NGO covers 400 villages in five blocks, and plans to cover all 1,000 villages in these blocks within the next few months.

Khushi Baby is also looking to cover the entire district of Udaipur as part of its short-term plans. The team also plans to expand its operations to Karnataka, Gujarat, and Haryana, and is in talks with the states' governments. Says Ruchit,

“We are also expanding to a new vertical, which is primary healthcare. We will be integrating this as part of the ‘Janta’ project we are undertaking along with the Rajasthan State Ministry of Health and Family Welfare.”

This project will entail primary preventative and curative services, with an outpatient department. Khushi Baby will be looking to track the health of its platform’s users, from birth to death, on a single card. The NGO is also scaling up its maternal and child healthcare initiatives and is looking for funding.

“We are also interested to partner with companies working on medical devices,” Ruchit says.