With the COVID-19 outbreak locking humans indoors, domesticated elephants are taking a breather due to the lack of tourism and the closed entertainment industry.

The entire world has come to a standstill due to the ongoing lockdown. With more than 3.7 million cases worldwide, the novel coronavirus has made a lasting impact on the world, and our everyday lives. While humans stay indoors, another section of nature’s diversity takes a breather.

Animals – dogs, cats, cows, pigs, etc – have been domesticated since time immemorial for food, resources, and companionship. Wildlife species like elephants have been known to be domesticated since 2000 BC. They were used as a mode of transport from the monarchical times, especially in India.

Elephants can learn things easily and act well under human control. However, they are not easy to tame, due to which their handlers carry out extreme cruelty. The many years of such physical and psychological trauma, leads to their temper outbreaks. To this day, these practices are still executed as a part of the tourism industry. With the hopes of making things better, an NGO aims to improve the lives of these distressed animals.

Coronavirus: Here’s how you can help voiceless furry friends affected by the lockdown

Established in 1995, Wildlife SOS was established by a small group of individuals inspired to start a movement and make a lasting change to protect and conserve India’s natural heritage, forests, and wildlife wealth.

Today, the organisation has evolved to actively work towards protecting Indian wildlife, conserving habitats, studying biodiversity, conducting research, and creating alternative and sustainable livelihoods for erstwhile poacher communities, or those who depend on wildlife for sustenance.

Their greatest accolade has been successfully ending the illegal and barbaric practise of dancing bears in India. They have rescued over 628 endangered sloth bears from illegal custody while helping the nomadic communities with sustainable alternative legal livelihoods to establish a successful model in place for sustainable conservation solutions.

In a conversation with SocialStory, Kartick Satyanarayan, Co-founder and CEO of Wildlife SOS, talks about the state of domesticated wildlife, especially elephants, during the lockdown.

“The outbreak of the coronavirus pandemic has hugely affected the tourism industry, and henceforth, the livelihood that came with it – especially in the states of Kerala and Rajasthan that were most popular for elephant joyrides for tourists,” says Kartick.

The majority of the elephants that are commercially exploited are blind, lame, elderly, and sick, who are forced to take tourists on their backs and walk on scorching roads. Sadly, the tourists are kept unaware of the true health conditions of the elephants. Festering sores and bleeding abscesses are bandaged up with colourful cloths, wounds and scars are covered with grease or paint, and the elephants are prodded with sharp spikes and bull hooks carefully camouflaged as harmless bamboo sticks.

The hospital is capable of conducting important laboratory tests and treatments for the elephants including wireless digital radiological capabilities, ultrasound, and laser therapy. It has an in-house pathology lab, and a medical hoist for comfortably lifting disabled elephants. There is also a digital weighing scale, a protected-contact elephant restraining device, a hydrotherapy pool, and quarantine enclosures.

While tourism creates demand for elephant rides, poachers are interested in obtaining ivory from elephant tusks and teeth of animals. Such kind of trafficking is very prevalent and the organisation is working towards improving the situation.

In light of the mistreatment of these animals, the organisation wishes to encourage responsible tourism. www.refusetoride.org is a resource website that has been created to sensitise tourists to the plight of elephants that give joyrides. While it may be a joyride for the tourists, it is anything but that for the elephants.

“If tourists stop wanting to ride elephants, it will help elephants as trafficking of elephants will stop and the cruel abuse they suffer to make them rideable will also grind to a halt,” says Kartick.

Life in the circus

For a long time, wild animals were the centre of attraction at circuses, performing tricks for spectators. They were not treated ethically and were beaten with a number of tools like whips, collars, electrics prods, etc. However, there are now considerable restrictions.

“The complete ban of wild animals like elephants, lions, tigers, and monkeys has made circus authorities resort to using of domestic animals like dogs, horses, and camels for the purpose of entertainment in circuses,” says Kartick.

These animals become easier to tame, hence are made to perform at these circuses.

The outbreak and the lockdown

COVID-19 has terrorised the lives of humans with mass deaths and rising cases. Most countries are finding it difficult to bring the situation under control and have gone into lockdowns. This has paved a way for animals to navigate through the city roads.

“All around the world, there have been reported incidents of animals venturing into cities as people have started confining themselves to the safety of their homes in an effort to control the spread of coronavirus,” says Kartick. “The restricted movement of vehicles and public transport has, in turn, made roadways more accessible for wildlife to navigate.”

The circus animals have been temporarily freed, and are not being forced to perform tricks for the public. However, the circuses are finding themselves unable to sustain livelihoods due to lack of a steady income source during this crisis. This, in turn, has affected the animals locked up in cages, who are now facing severe starvation.

As the elephants find relief, even if for a short period, uncertainty lurks around the future of these gentle giants. The state governments of Kerala and Rajasthan have made the necessary arrangements for their survival by providing monetary support to the elephant owners.

With over 500 jumbos in Kerala and as many as 300 in Rajasthan not being paraded around for rides, temple processions, and festivals, the elephant owners are worrying about where their lifestyles – the limited resources pose a problem to the survival of these elephants.

While COVID-19 has impacted human lives, it has also impacted the wildlife as well. A tiger, Nadia, in the Bronx Zoo in the United States has tested positive for the virus. However, she is expected to make a full recovery. Along with her, three other tigers and three African lions have also developed similar symptoms.

Though the animals are roaming free, the situation lacks durability. Once the virus is contained and humans reclaim their turf, the animals will go back to their hiding spaces.

According to Kartick, it is a time to question many of our supposed 'needs' – entertainment through wildlife such as riding or performing circuses, allowing the use of wild animals like pangolins, bears, bats, tigers, etc, for traditional medicine which encourage illegal poaching of many endangered species for their body parts, as well as encourage consumption of bushmeat and wild animals.

“The lockdown is a time for introspection – the idea that wildlife populations will reclaim urban environments during this period seems quite far-fetched as animals have always been part of our surroundings,” says Kartick. “In fact, this brings up a more pertinent question — once the humans reclaim their turf, do we continue as we have so far, or do we see this pandemic as humanity’s wakeup call?” 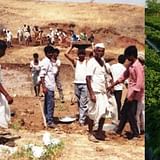