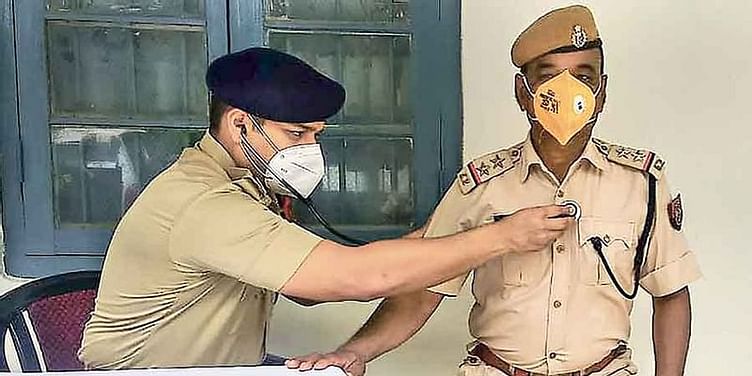 Barpeta Superintendent of Police (SP) Robin Kumar is performing the dual duties of a police officer and a doctor as the district witnesses a spike in COVID-19 cases.

A young IPS officer is winning hearts in Assam by treating people during the coronavirus pandemic while donning the khaki uniform, thanks to his medical background.

Barpeta Superintendent of Police (SP) Robin Kumar is performing the dual duties of a corona warrior - a police officer and a doctor - as the district witnesses a spike in COVID-19 cases.

Kumar, a 2013 batch IPS officer, is a specialist in medicine (MBBS, MD), which has helped him respond to the call of duty and provide treatment to the needy during the ongoing medical emergency.

Besides heading the district's police department, Kumar is also running a 50-bedded COVID care centre with four ICU beds in Barpeta Police Reserve for police personnel and their families and is also planning to hold health camps for women and elderly people.

"I find myself fortune to dedicate myself in both the roles of a district police chief and a doctor. It gives me immense satisfaction," Kumar told PTI over the phone.

The SP has also held a health camp for those police personnel who are 50 years or above in Barpeta.

After joining Assam Police, Kumar, a native of Ghaziabad in Uttar Pradesh, first organised a health check-up camp at Tezpur during his previous posting in Sonitpur district a few years ago.

"When the pandemic struck, I took permission of Assam DGP Bhaskar Jyoti Mahanta to open a COVID care centre for the police personnel in Barpeta. Now, we are running the centre smoothly," he said.

"An Assam Police warrior in the truest sense. Great gesture of service to humanity by Barpeta SP Dr Robin Kumar, utilising his skills to help doctors and healthcare workers in the fight against COVID-19," Sonowal said.

An @assampolice warrior in the truest sense.

Great gesture of service to humanity by Barpeta SP Dr Robin Kumar, utilising his skills to help doctors and heathcare workers in the fight against #COVID19. https://t.co/HKEeMdGsK5

The IPS Association, a body which represents the Indian Police Service officers across the country, said Kumar has set an example by leading from the front.

Kumar's IPS colleagues also appreciated his dual role of an SP and a doctor after his photos in full police uniform treating police personnel with a stethoscope went viral on social media.

SP of the National Investigation Agency Sanjukta Parashar tweeted: "Thank you Robin! May you shine even more in the service!"

Kumar, who did his MBBS and MD from Lala Lajpat Rai Memorial Medical College in Meerut, said he had never expected such encouraging response from police fraternity and common people.

As many as 76 police personnel in Barpeta were infected by the coronavirus in the past few months, and Kumar personally took care of every one of them.

"Fortunately, all of them have recovered and returned to duties," he said.

The SP said he has ensured that those police personnel who have problems of hypertension, diabetes, or other health issues are given desk jobs rather than field duties so that they are not exposed to the virus.

The Barpeta police had also run a community kitchen for poor and destitute for about 40 days when the countrywide lockdown was first announced in March.

When asked why he decided to appear for the civil services examination despite being a specialist doctor, Kumar, who was a district topper in Class 10 and 12 examinations and also got selected for engineering before he chose to study MBBS, said, he contracted dengue in 2011 when he was working at Delhi's GTB hospital, and then developed an interest in going into the policy-making side of the governance.

"As a doctor, we are one part of the picture, that is curative. What about the prevention? As a civil servant, I am performing both the roles," he said.

How Harish Sadani rallies men to fight for women rights

These 5 organisations are rescuing wildlife and endangered animals