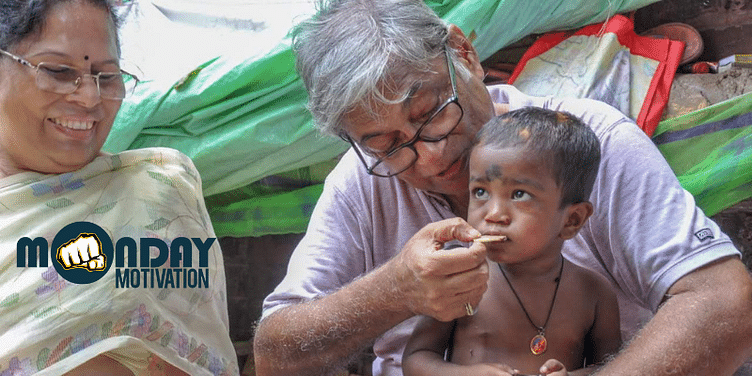 Arup Sengupta who lived on the streets after he contracted TB, is now impacting hundreds of street children in Kolkata with various social initiatives, inspired by his caretaker, Mother Teresa.

Mother Teresa once said, “Not all of us can do great things. But we can do small things with great love.”

Seventy-year-old Kolkata-based social worker, Arup Sengupta was diagnosed with tuberculosis (TB) at the age of 16. He was told he had only seven months to live. He not only survived the dreaded disease but inspired by his caretaker, Mother Teresa is bringing new hope in the lives of street children in Kolkata.

Arup still struggles with a host of health issues – he suffers from a sleep disorder and acute COPD (Chronic obstructive pulmonary disease), and carries an oxygen cylinder at all times.

Despite these and braving the challenges brought on by the COVID-19 pandemic, Arup has been relentless in his efforts to help the needy through his NGO, Notun Jibon (meaning new life).

SocialStory spoke to Arup Sengupta to understand his journey, his battle with tuberculosis, living under the care of Mother Teresa, and living his life in line with her principles.

Though born into an affluent family in Kolkata in 1952, Arup’s life was not always a bed of roses. His family fell into hard times and in 1968, while studying in Darjeeling, he was diagnosed with tuberculosis and was sent back to his hometown.

“The people in my locality kicked me out of my home stating that TB was contagious, with the same fear they have of the coronavirus today,” Arup tells SocialStory.

“Back then, with TB you either died or survived, there was no in-between. I was told I had only seven months to live,” he adds.

With his mother, Arup went to the church seeking help, and he was directed to Sister Teresa (as she was addressed then). With no accommodation, Arup lived on the footpath for a few days.

At that time, Mother Teresa was taking care of leprosy patients on the streets, and was known as the ‘footpath saviour’.

“As I had financial issues, she sent me to a TB care facility in Darjeeling after four days. I was with 18 people in a single room, and saw death upfront almost every day. But I was lucky to be alive,” he says.

On recovery, Arup moved back to Kolkata where he stayed with Mother Teresa for a while. He also completed his basic education in the meantime, and involved himself in sport, music and even a little bit of acting.

“I had lost two years of my life, but working with Mother Teresa made me realise there was another side to life, beyond these problems. She also encouraged me to engage in social work wherever I went,” he says.

In 2010, when Arup and his family moved to Delhi, he observed there were a lot of construction activities and the sites were filled with children from very poor families. They decided to help them in a small way by providing them with blankets, clothes and money.

A new life with Notun Jibon

After the traffic settles in the cities at night, most of the homeless people across India take over the roads. People of all ages, from the elderly to the young children, are found sleeping on the pavements, and under bridges struggling with extreme weather.

Distraught by the scenario, Arup decided to help them, especially the children who were missing out on the important things in life due to their pitiable conditions.

“We started offering school bags, shoes, socks, uniforms, textbooks and notebooks. We also spent our Saturdays teaching them about basic morals and the importance of personal hygiene,” says Arup.

With this, Arup laid the foundation for Notun Jibon, an NGO that works with street children to rehabilitate them and send them back to school.

Notun Jibon, which translates to ‘New Life’, not only exemplifies Arup’s efforts but also that of to Jhumki Bannerjee, a key member of the NGO, whose life has a heartbreaking backstory as well.

In 2016, when Arup moved back to Kolkata after retiring from Airtel he met 38-year-old single mother Jhumki who was struggling to make ends meet. She had been facing a lot of domestic violence from her partner before they parted ways.

Arup and his wife, Dahlia helped rehabilitate Jhumki and her children, and aided in her separation from her husband. With more than Jhumki is now secretary of Notun Jibon.

The NGO has a team of eight women hailing from marginalised backgrounds or were previously sex workers. The group refers to themselves as Nari Shakti (women power) and each one of them has taken up the various roles at the NGO from teaching to fundraising.

The NGO is now looking after 367 children in Kolkata, most of whose parents live on a hand-to-mouth basis with an unstable income. Since these children could not afford to go to school, some of them requested Arup to teach them at night.

Arup wanted to start a school for these children. “We went to the police station and asked the SHO about how we could help these children as an NGO. He directed us to a red light area which housed a club, and was trying to do something for children, but was unsuccessful. That’s when we started our school inside this area.”

The school, Sahoj Path (meaning easy way) has about 40 students between the ages 3-12, most of whom are children of sex workers, beggars, etc.

Remembering Mahatma Gandhi: India readies to celebrate the joy of giving with DaanUtsav

Classes start in the afternoon with an hour of Physical Training (PT), followed by a tumbler of warm milk and a big banana as an evening snack. After this, the children study during the first two periods, which include doing their homework, reading, revision, etc. The third period is a fun one and includes lessons in art, craft, music, dance, and value education.

Arup also becomes a proactive Santa Claus every year until 4 am on Christmas, giving goodies to children.

“Every Christmas, I dress up as Father Christmas and drive around town in my car, since I don’t really have access to a sleigh with reindeers. I didn't stop this tradition even after Dahlia passed away, who I am sure is smiling down on me,” says Arup with a laugh.

As soon as the lockdown was declared, Arup and his team were on their feet to distribute essentials to those in need. The packets included three kilograms of rice, two kilograms of potatoes, half-a-litre of mustard oil, and half-a-kilo of masoor dal.

“I don’t know how we managed to pull it off, since the very next day, all the essential stores nearby shut shop. However, once they opened, we made sure to feed the 40 children and their families every Tuesday until this day,” he says.

Additionally, he also makes it a point to help about 400 sex workers that live in the red light area about once a month.

When the super cyclone Amphan hit West Bengal, and in particular, the Sunderbans region, and Arup rallied his team to help those in distress.

“We took a ferry with packets of rations to the area, and distributed it to the people in the islands. We adopted three villages and ensured they received at least 400 packets of ration every month, as much as I can afford.”

While some of the funds for the NGO comes from CSR spends, most of it comes from family, friends, and well-wishers.

With a donation of about $20,000 received from a good friend, Arup also plans to open an ashram in the village that will house a care centre, a school and a farm.

The care centre, Akanto Apon (meaning selfishly mine) will take care of the homeless and the destitute - 10 men and 10 women from the streets.

The school will be residential and will accommodate around 100 students from the red light area, and uplift them. The rest of the land will be used for farming to ensure self-sufficiency.

“This is my ultimate dream, and once the pandemic situation clears, I hope to live the rest of my life here,” Arup says.