Remembering Mahatma Gandhi: India readies to celebrate the joy of giving with DaanUtsav 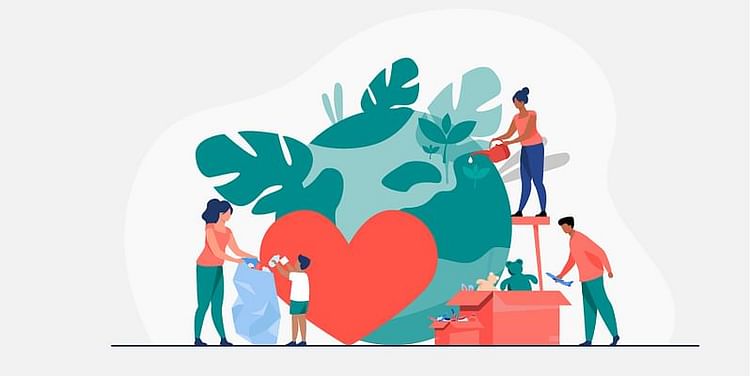 NGOS, corporates, startups, and individuals are set to celebrate the birth week of Mahatma Gandhi with DaanUtsav. India’s biggest festival of giving involves acts of kindness by exhorting people to give their time, material, or money to causes of their choice.

The future depends on what you do today. – Mahatma Gandhi

The US may celebrate Thanksgiving, but India – despite a series of cultural and religious festivals through the year – doesn’t observe a day to offer thanks and give back to society.

Taking Mahatma Gandhi’s words to heart, a series of individuals, corporates, and NGOs in 2009 began celebrating the Joy of Giving Week, a “festival of philanthropy” that included efforts to create awareness, volunteering, and fundraising events.

In 2014, this morphed into DaanUtsav, India’s biggest festival of giving during which people across the country come together and perform acts of kindness by giving their time, material, or money to any cause(s) of their choice.

The weeklong celebration, which begins on Mahatma Gandhi’s birth anniversary, October 2, continues till October 8, and aims to bring India together to “be the change” they “want to see”.

The year 2020 marks the 12th year of India’s giving festival, and people are being encouraged to celebrate the joy of giving amid these trying times.

GiveIndia, India’s largest donation platform, has a range of activities planned for the occasion and hopes to encourage people to join in. “DaanUtsav is promoting the act of giving among people and creating more awareness about charitable causes,” says Ashok Kumar, President of GiveIndia.

No giving event is small. It could be a simple affair like a family taking out their maid’s children for pizza and ice cream, or a large drive such as Gift Compassion, an initiative with more than 10,000 schoolchildren across India making and exchanging gifts with peers from different socio-economic backgrounds.

“Schools, colleges, corporates, apartment communities, Resident Welfare Associations (RWAs)…they can all do their bit in their own way to celebrate the occasion, from organising donation drives to feeding the poor,” Ashok says.

In the time of the coronavirus pandemic, GiveIndia has announced three programmes: 100 Heroes, GiftBack, and Top Ten COVID Heroes.

100 heroes is a fundraising carnival for NGOs, and will reward the top 100 NGOs for their fundraising efforts. This event starts on October 2, and will end on November 20, after Diwali.

“Due to the pandemic, a lot of non-COVID NGOs are missing much needed-donations. With 100 Heroes, we hope to help these NGOs,” Ashok explains.

Through the GiftBack event, every donation above Rs 1,000 made during DaanUtsav will be topped up with an extra amount by GiveIndia, up to a maximum of Rs 500.

GiveIndia will also award the Top Ten NGO partners who have carried out stellar work to help those who needed it the most through its Top Ten COVID Heroes event.

Each year, DaanUtsav sees a number of corporate participants, which organise various events such as donation drives, fundraisers, and activities like flash mobs to create awareness.

GiveIndia is now collaborating with PhonePe, Flipkart, Tata Projects, and American Express, along with other startups and corporates to encourage customers and employees to give back during DaanUtsav.

Indian e-commerce biggie Flipkart has been very active in the past few celebrations of DaanUtsav. This year, it has partnered with GiveIndia to support three causes: skill development, sustainable livelihoods, and women empowerment.

"We have partnered with GiveIndia for DaanUtsav and GivingTuesday India, a one-of-a-kind online giving movement that encourages citizens to donate to causes they believe in and extend support to communities in need, including those that have been affected by COVID-19,” says Mahesh Pratap Singh, Head of Sustainability and Social Responsibility, Flipkart.

This DaanUtsav, Flipkart plans to highlight social causes on their platform, and encourage employees, sellers, and consumers to “make a positive impact through their contribution”. The ecommerce firm hopes its wide reach and accessibility will help contribute to “rebuilding communities that have been disrupted in these unprecedented times”.

PhonePe is also contributing to the giving festival, and will use its payment platform as a channel to allow customers to sponsor a meal for families affected by the pandemic.

“We are delighted to partner with GiveIndia. With over 230 million users across 500 cities, we are humbled to be a vehicle enabling our customers to sponsor a meal for COVID-19 impacted families. We hope this will help many of our citizens tide over trying times,” says Ankit Gaur, Director of Business Development at PhonePe.

Another initiative that aims to help people give back is GivingTuesday. Started in the US in 2012 to help people show their generosity after excessive spending on themselves during Black Friday and Cyber Monday, GivingTuesday India is celebrated on the Tuesday of the weeklong DaanUtsav.

The drive, which allows people to donate for a "better Bharat" offers options such as contributing stationery kits for underprivileged kids, offering in-kind gifts to NGOs, sponsoring the education of children, helping end child marriage, and rebuilding livelihoods for migrant workers, is organising the Generosity Run. This is an attempt for Indians to express solidarity with one another and exhorts runners to collectively cover the distance of 79,000 kilometres that Mahatma Gandhi walked for India's freedom. The run will begin on October 2 and end on October 11.

India seems to have realised that individual contributions can add up to a big impact when done at the same time!

GiveIndia recently conducted a small study to understand if there had been a shift in donor mindset, targeting individuals in metropolitan cities and smaller towns during the pandemic.

The results of the survey, with a sample of 450 respondents, were heart-warming. As many as 85 percent of respondents planned to increase their giving, and 74 percent were more inclined to contribute to local communities. Only under 12 percent of the sample said they would reduce their donations owing to the trying times.

“We are humbled to see that India’s appetite for giving has radically increased. I urge people, especially children, to come forward, donate generously in any kind, and celebrate DaanUtsav,” Ashok says.

5 reasons why you should adopt Indie dogs