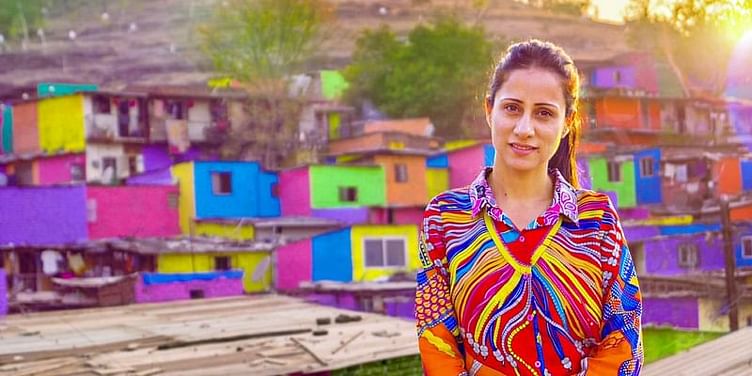 Through her art foundation, Rouble Nagi has been creating an impact across cities through paintings about social causes, and is also empowering slums pan India.

Rouble Nagi is a passionate artist from Mumbai who has been painting for about two decades now. While she mostly made murals and sculptures for commissioned projects back then, public spaces became the canvas shortly after.

“Art for me was a medium to connect with people, I always knew the potential of good art and that it can be used to start a dialogue and inspire people to address social issues and problems,” she tells SocialStory.

While every artist has a style and its niche audience, Rouble’s inspiration came from the ‘Aam Janta’ (common folk). Moreover, she needed to serve a social cause through her artistic expression and didn’t want it to be restricted to a particular class.

So, a decade ago, she started the Rouble Nagi Art Foundation (RNAF), not just for her art but also to serve the masses, especially the underprivileged. RNAF has been working in slums and villages across India to addressing issues like education, women empowerment, and employment, along with hosting regular workshops around sanitation and hygiene.

“After working for over a decade in rural India, we set off cornerstones, representing shared goals and what people actually wanted: education, women and youth empowerment, health and nutrition, and environment, along with transformation and most importantly, addressing employment through skill and vocational training centres,” shares Rouble.

﻿Rouble Nagi Art Foundation﻿Through the various social service delivery projects and initiatives for slums and villages, the foundation aims to improve the standard of living for the poor and vulnerable population.

“We believe every community has its unique culture, traditions, and beliefs. To uplift the entire community, our approach honours those things but never at the expense of the personal dignity and humanity of an individual community member. We co-develop programmes directly with each community after understanding the problems on the ground,” she says.

One of its biggest projects is ‘Misaal Mumbai,’ which started with a ‘Paint Dharavi’ initiative in 2016. Through this initiative, over 150,000 houses were painted by Rouble and her team, which also included locals, volunteers, and residents.

The result? An explosion of rainbow hues that would be visible from far away, stretching from one dwelling to the next in a wave of unexpected energy, creating a visual impact.

“Art opens a window for discussion and exudes positivity. Colourful surroundings will change the lives of the local community living in the slums. Misaal Mumbai is not only about painting the walls; the main goal is to give life to the slum and keep it clean and hygienic. Everything should be bright and colourful,” she says.

“The colours will fade in a few years but the positive change we want to bring in the people’s mind will stay forever and encourage many more,” she adds.

How this Delhi-based foundation is empowering over 5,000 Indian folk musicians

“It is estimated that 65 million people lived in around 108,000 slums across India (as per 2011 census), of which Maharashtra had the most number of slums, at around 21,000. That's the reason we started Misaal Mumbai, which was the first initiative of Misaal India,” says Rouble.

She further adds that the initiative has impacted more than a million lives over the last 10 years, and the size of the projects keep growing. In fact, village panchayats from Madhya Pradesh and Rajasthan have reached out to the foundation, asking them to implement a similar project after looking at the centre in Jawali (Rajasthan).

Being a volunteer-based organisation, RNAF has members and volunteers from different states. The core team is based out of Mumbai and Delhi. But it has also a registered database of almost 400,000 volunteers across India, along with a panel of experts and an advisory committee who help them with valuable inputs.

With Love, From Granny: How three generations of women are empowering over 30 artisans

The pandemic and the way forward

Rouble says that the team was busier than ever during the pandemic. From creating awareness about COVID-19 to distributing food, ration, and hygiene kits, RNAF has done it all.

“RNAF reached out to 200,000 families across three states. Most of our slum projects already had a steady network and community centre; we used them to form a proper distribution network,” says Rouble.

Next, RNAF plans to set up a skills training college by 2022. The villages and slums with RNAF centres already have a literacy rate of 80 percent, and an employment rate of 70 percent, at present.

“Our aim is that by 2025, all the districts that we cover should have a literacy rate as well an employment rate of 100 percent. The school dropout rate has also significantly decreased, and the girl child education has been our focus. However, people’s mindset needs to change, and we hope to keep making a positive impact as we have been doing for the last 10 years,” she signs off.