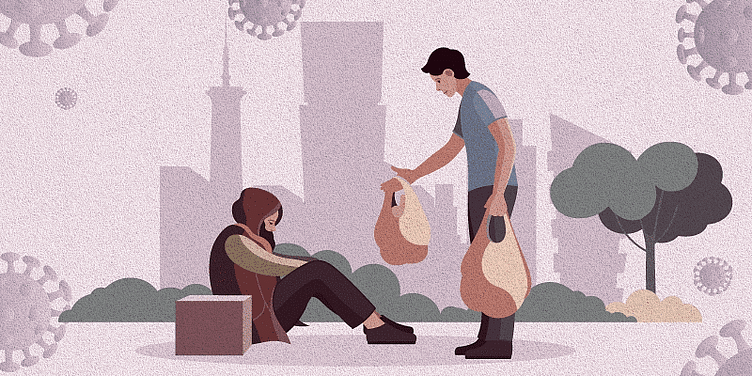 Faiyaz Shaikh lost his job in August last year, but that did not stop him from helping the poor families in the Ambujwadi slum locality at Malwani. His community kitchen is providing food to around 500 people every day.

Crisis brings out the best in people and a man from Mumbai has proved it as he has set up a community kitchen from his own savings for the poor migrant workers suffering due to the COVID-19-induced restrictions.

Faiyaz Shaikh, who is in his mid-40s, lost his job in August last year, but that did not stop him from helping the poor families in the Ambujwadi slum locality at Malwani in suburban Malad.

Now, his community kitchen is providing food to around 500 people every day, Shaikh told PTI.

He is also providing them ration and medicines since last year, he said.

Over one lakh migrant workers live in the Ambujwadi locality and their livelihood is dependent on daily wages.

Shaikh said during the lockdown last year, he got help from some NGOs for ration and medicines, but this time, he had to manage things on his own.

"After I lost my job, I got around Rs 10 lakh from my company. I am utilising that money to offer food to the migrants through the community kitchen and also providing them medicines," he said.

Shaikh said he came up with the idea of a community kitchen after seeing the sufferings of slum dwellers in Malwani.

Humanity First: How this non-profit is helping 30,000 families cope in the pandemic

The kitchen must continue to feed the children and the needy, he said.

He said the community kitchen has also helped in providing employment to locals and at the same time, hygiene is also maintained.

Shaikh said his wife has also been running an English medium school in the area for the last 11 years, where around 350 students are enrolled.

"The fees of students was waived off for three months last year, and now for the entire year," he said.

The locality where the school is situated comprises daily wagers and they don't give priority to the education of their children, he said.

"If the fee waiver was not allowed, there would have been dropouts from school, endangering the future of these children," he said.

When Cyclone Tauktae brushed past the Mumbai coast last week, strong winds blew away roofs of several houses in the slum colony. At that time, the Shaikhs provided shelter to these families in the school and made sure they were well-fed.

Asked how he is managing his own livelihood, Shaikh said, "For the last 11 years, I have two families - my own and this slum colony. I can't differentiate between the two. I will continue to look after both till I can manage."

The story of Patan Patola: A fabric that never fades and one family’s tryst with keeping it alive