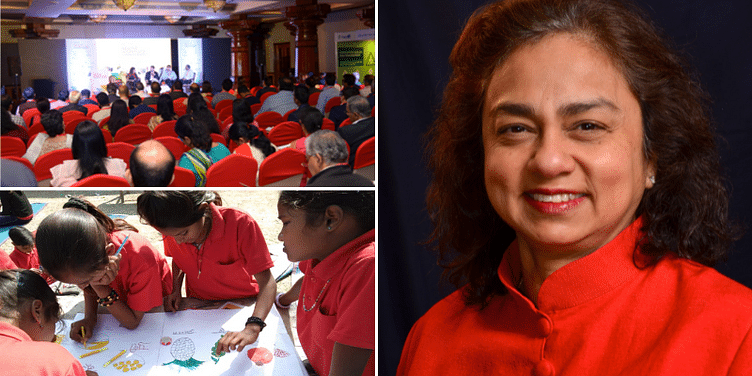 India has an estimated 77 million people with diabetes — making it the second most affected country in the world after China. Moreover, the hereditary nature of this disease increases its frequency amidst the various demographics in the country.

In such cases, a controlled lifestyle and awareness of various non-communicable diseases (NCDs) — diabetes, heart diseases, cancer, and chronic lung diseases, among others — could be the only remedy.

US-based Arogya World — a global health non-profit organisation — works towards preventing these NCDs through health education and lifestyle change. In 2012, it touched base in Bengaluru, India as Arogya World India Trust.

Arogya World has created numerous programmes using science-based research to target the various demographics of the Indian population to help them prevent diabetes.

“Our doorstep health model takes prevention through healthy living — whether they are in schools, at workplaces, or deep in the community,” Nalini Saligram, Founder and CEO, Arogya World, tells SocialStory.

The non-profit’s mission is reflected in its name “Arogya”, which in Sanskrit means “to live a life without disease.” The goal is to help people around the world live a disease-free healthy life, and at present, it is focusing on India.

With the powerful tool of text messages, the non-profit reached out to over 1,052,633 Indians in 2012-2013. Through this effort, it sent about 56 messages to more than one million people about diabetes and its prevention.

“The mobile phone is so widespread and ubiquitous in use that we need to find the best ways to improve how compelling the programme can be for every individual consumer,” Nalini shares.

COVID Warrior: How Saarthi Education is empowering women, educating over 8,000 children amidst COVID-19

In March 2021, with support from RIST (Rural India Supporting Trust), and in partnership with LV Prasad Eye Institute, it kicked off a programme to educate 100,000 villagers in the Hyderabad area with mDiabetes, integrated with community health education.

In fact, the mDiabetes programme was recognised and won the Google AI for Social Good award, which allowed the NGO to use Google’s resources and expertise and academic experts to make its diabetes prevention programme and mDiabetes more effective with the use of AI.

The non-profit developed the Healthy Schools programme in partnership with India-based NGO Hriday and uses influencers, including teachers and peer leaders, to educate children aged between 11-14 about diabetes and its prevention.

“Our school programme works with middle school children, showing them in games and activities why it's important to change behaviour and adopt healthy positive habits,” says Nalini.

How this social entrepreneur has been rescuing children during the pandemic

The comprehensive programme includes classroom and school-based activities and outreach efforts in students’ homes and communities. The programme effectiveness is measured through the comparison of the children’s knowledge, pre and post programme.

So far, Arogya World has impacted over 300,000 kids in Thane, Maharashtra; Banda, Uttar Pradesh; and digitally through Diksha, a government-run digital infrastructure for school education.

While unhealthy lifestyle practices are one of the main contributing factors to NCDs, India also sees a percentage of diabetes among its rural populace. Nalini says the only possible explanation for a section, which has an average BMI of 17-18, is genetics and heredity.

“Today’s youngsters see an early onset of diabetes in many cases despite their lifestyle. The only way to prevent this is to ensure that their lifestyle does not aggravate this condition,” says Nalini.

Considering this, the Healthy Workplaces programme caters to the younger audiences who need to be aware of adopting a healthier lifestyle amidst their tight work schedules.

Since 2013, Arogya World has deployed the programme in several companies and now has about 145 companies in India that are recognised as Healthy Workplaces, impacting more than 3.1 million employees.

Some of the most recent companies are Bennett, Coleman & Company, Cummins India Ltd, and Thermo Fisher Scientific India, among others. In fact, it added the mental health criteria in 2020 to address the increasing mental health cases amidst the COVID-19 pandemic.

“MyThali shares a picture of a plate that shows people what to eat, and in what quantities at every meal, and we're rolling it out in a major way with social media,” says Nalini.

MyThali teaches people about the importance of “poshan” (good nutrition) and portion. Inspired by the US MyPlate approach, Arogya World translated the National Institute of Nutrition (NIN) guidelines into an easy-to-follow picture.

The country’s food preferences — ranging from the north (roti-based) and south India (rice-based), vegetarians and non-vegetarians, and the vast rural and urban differences — created a challenge to develop a picture of a universal MyThali.

The programme has been done in over 50 workplaces and claims to have had a digital reach of more than 10 million people.

[COVID Warrior] How this student-run NGO raised over Rs 40 lakh to help children, underprivileged during the pandemic

Through each of these programmes, Arogya World has impacted over five million people with a small team of just 20 people. Most of the team members are based in India.

In fact, the NGO attributes its impact to the various NGO partners and organisations, who are an integral part of Arogya World’s success.

“We are big believers in not reinventing the wheel and leveraging another’s reach and strength, and that is a very key part of the way we work, and we follow different models in different programmes,” says Nalini.

Rather than creating a new rapport with the various organisation they work with, they come together and reach out to NGOs who are working on the ground with the organisation.

Although it faces funding issues, fortunately, the non-profit is supported by organisations, including the Public Health Foundation of India, Clinton Global Initiative, Global Centre for Healthy Workplaces, Nokia, and Ambuja Cement Foundation, among others.

Talking about the road ahead, Nalini says, “We’re looking to scale up our programmes to other countries. We also want to partner with government bodies at different levels to reach out to more people in the last mile.”

These 5 NGOs are working towards uplifting rural women across India

Meet Narayana Murthy the father, through a humble letter he wrote to his daughter