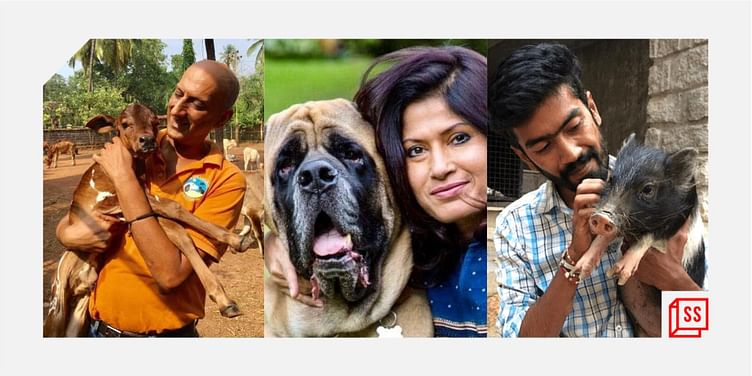 SocialStory lists inspiring individuals who have dedicated their lives to helping animals, conserving their natural habitat, rehabilitating them, and more.

In India, animals are often seen wandering the streets — prone to road accidents and extreme climates rather than being taken care of.

This is a result of their natural habitat being destroyed to be used for human purposes, while some may also be pets that have been abandoned by their caretakers.

Over the years, many passionate people have come forward to help these voiceless souls. While there are several renowned organisations working for the welfare of animals, these individuals have also stood by their cause and have helped countless ones survive.

SocialStory looks at some of these inspiring personalities who have gone above and beyond their capacity — trying to take care of the animals.

Anil Bishnoi has dedicated his life to the conservation of blackbucks. A resident of the Hanumangarh district of Rajasthan, he has been campaigning to save them in their natural habitat for the last three decades.

Blackbucks are usually hunted down for their meat. Anil himself has met many people who believe it to be okay to kill animals for leisure purposes. This is one of the reasons that provoked me to start a mission to guard these animals in 1990.

Due to its habitat loss, Anil has even started an active campaign against poachers across 50 panchayats. He has lodged more than 200 cases of poaching and nearly 24 cases reached the final stage where the poachers were sentenced to appropriate penalties.

Additionally, in his own capacity and with the help of fellow residents, Anil has built over 60 small to medium-sized water bodies to cater to the needs of the blackbucks.

Alpana Bhartia believes in the fact that empathy can be best imparted by first creating awareness among children.

An honourable animal welfare officer, Alpana has been working in the field of animal welfare and conservation for the past 25 years. Being empathetic towards animals is something Alpana had learnt right from her childhood. She had grown to become very fond of pets and animals as her father always kept dogs.

With the primary goal to create awareness about wildlife and instill deep regard for cohabitation and welfare of animals, Alpana along with a few others started People for Animals (PfA) in Bengaluru. The aim of the NGO has always been to provide veterinary care to injured urban animals and release them into their natural or adopted habitat.

Over the years, the organisation has rescued and treated more than 25,000 wild animals across 200 species. It has disbanded elephant training camps, put a stop to ostrich farming, worked on preventing the illegal slaughter of camels, and enabled confiscation of illegal domestication and commercial exploitation of various protected animals including macaques, parakeets, jackals, and snakes.

A passionate dog mom, Kaveri Rana Bhardwaj lost her most loved pet dog. According to Kaveri, the only thing that filled the void of the loss was in doing something meaningful- which she found in rescuing helpless and disabled dogs.

After that, she co-founded Sophie Memorial Animal Relief Trust with her husband, Yashraj Bhardwaj. There were no animal shelters in Greater Noida, when the couple opened the first animal shelter in the city, the SMART Sanctuary.

Often referred to as the ‘Dog Mother’ of Noida. Kaveri shares a very special bond with dogs, and often refers to them as her “babies and children”. However, Kaveri strongly disagrees with the current treatment of disabled dogs and that is what keeps her going.

“Even though some of them don’t make it through, it is really heartening to see them recover and get back to their normal life,” she told SocialStory in an earlier conversation.

Pradeep Nair’s love and adoration for animals go beyond hugs and cuddles. Born in the town of Sathupally in the Khammam district of Telangana, Pradeep’s tryst with animals began when he was just 11-years-old. After keeping a parrot in an enclosure for days, he discovered the joy of releasing it, and from then on, there was no looking back.

A web developer by night and an animal rescuer by day, he has been stepping out of his comfort zone to provide solace to the amiable creatures.

From volunteering with the Blue Cross, a UK-based animal welfare organisation, laying the foundation for an NGO on his own, to rescuing and treating more than 70,000 animals, Pradeep has done it all.

Today, Pradeep has extended his endeavour in the field of animal welfare. He not only gives animals a new lease of life but also organises several preservation programmes, awareness campaigns, and training workshops as part of his NGO Animal Warriors Conservation Society.

A decade ago, after his stressful life in the UK, Atul Sarin decided to shift and settle at Goa in 2001.

He saw many cows wandering the streets of Goa and felt sorry for them. One of them was a three-legged malnourished cow that was causing traffic jams. Atul decided to rescue it and took it to his garden where he could look after it.

Soon, people approached Atul to ask for his help in rescuing other cows in distress. Many of them were beaten, suffered acid attacks, got injured, were malnourished, and have even had to drink contaminated water.

By the end of 2001, Atul was taking care of five injured cows in his garden. He decided to register a trust to better organise his efforts and in 2005, set up Welfare for Animals in Goa (WAG) to rescue and rehabilitate as many cows and other animals as possible.

The shelter provides a safe haven for stray and abused cows, where they are fed a healthy, balanced diet mostly sourced from their unique cow garden (where they grow tree fodder such as bananas). They also receive medical treatment and even get their coats brushed therapeutically.

Caring for son with autism, this couple is now building a township for autistic care