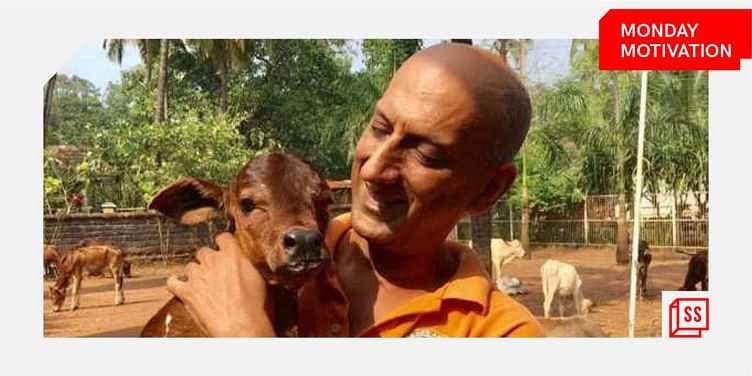 After realising the plight of animals and cattle, Atul Sarin founded Welfare for Animals in Goa (WAG) – a shelter home for abused, injured, and malnourished cows and other animals.

If you roam on the streets of India on any day, there are chances that you will find cows wandering around. According to Statista, India has the highest number of cattle in the world, numbering at over 305 million in 2021. However, over five million of them are stray, as per the 20th Livestock Census.

A decade ago, when 41-year-old Atul Sarin settled in Goa, he saw many cows wandering the streets and felt sorry for them. One of them was a three-legged malnourished cow that was causing traffic jams. Atul decided to rescue it and took it to his garden where he could look after it.

“But then I realised that these are intelligent, sensitive beings who need to be taken care of. At the moment, all the problems that they go through are largely caused by humans. In Goa, especially, they are often prone to road accidents,” Atul tells SocialStory.

Soon, people approached Atul to ask for his help in rescuing other cows in distress. Many of them were beaten, suffered acid attacks, got injured, were malnourished, and have even had to drink contaminated water.

By the end of 2001, Atul was taking care of five injured cows in his garden. He decided to register a trust to better organise his efforts and in 2005, set up Welfare for Animals in Goa (WAG) to rescue and rehabilitate as many cows and other animals as possible.

Atul grew up in Kenya and the UK, and studied law. He joined his parents' business of with a couple of hardware and garden products shops in the UK, and expanded them. However, he found his life in the UK to be stressful and decided to shift to Goa in 2001. He bought an old house and ran it as a guest house.

Living in Goa, he realised that there were not enough cow shelters in the state.

“Very little is happening for cows. There are very few NGOs that rescue and take care of cows in India. Also, people prefer feeding/adopting dogs and cats rather than cattle.”

Atul brought together a team of 11 people – comprising a veterinary doctor, assistants, and rescuers – to help him with taking care of these animals.

There are about two shelter homes under WAG – one is where dogs and cats get rescued and sterilised, and the other one is for cows and cattle.

Atul, now 58, and his team have the experience of running the shelter homes for a decade and know how to treat and rehabilitate injured cows. Currently, there are about 60 cows at the WAG shelter at Siolim.

Once the cows get completely healed, they are sent to larger gaushalas (cow shelters) where they can be fed well. However, these big facilities lack the time and the expertise to treat injured cows.

According to him, ever since he started WAG, he has rescued and rehabilitated about 16,000 animals, including cattle, dogs, and cats. His team rescues almost three cows every day.

The shelter provides a safe haven for stray and abused cows, where they are fed a healthy, balanced diet mostly sourced from their unique cow garden (where they grow tree fodder such as bananas). They also receive medical treatment and even get their coats brushed therapeutically.

Additionally, the NGO claims to have installed one of North Goa’s first biogas plants which convert cow dung to clean cooking fuel, which is used for cooking food for beach dogs and other animals they look after.

Apart from this, the team also conducts workshops for school children to help them understand the plight of these animals. They also educate and encourage cattle farmers and local communities to take care of animals healthily and sustainably to alleviate their suffering.

“We do this so that stray cattle are no longer seen as a hindrance and don’t get sent to slaughterhouses early,” adds Atul.

However, the challenge lies in managing the cost of maintaining these beings, especially cows. Atul says that about Rs 2 lakh per month is required to take care of 70 cows. While his NGO is mostly dependent on private donations and fundraising, it is also applying for government grants and schemes.

Atul encourages everyone to do something to help animals, be it through rescuing, taking care of them, or in admin work for NGOs and shelter homes.