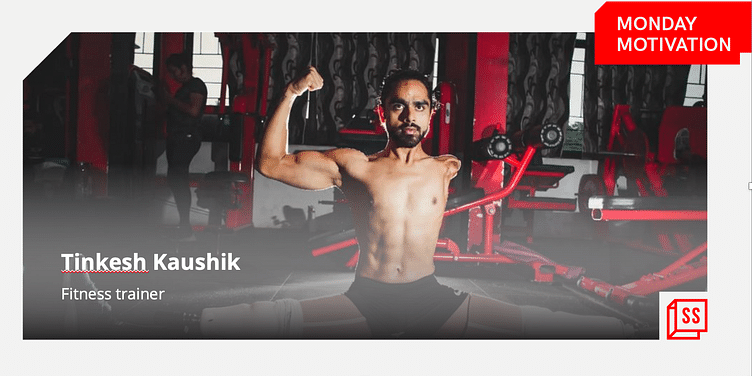 After losing three limbs in an accident, Tinkesh Kaushik set out on a mission to prove that there are no limits to what people with disabilities can do. Read his awe-inspiring story…

Growing up in Jhajjar district, Haryana, Tinkesh Kaushik was an extremely active child whose favourite pastime was flying his kite. One day, in 2002, he was out for a regular evening, playing with friends, when his kite got caught in a high-tension wire. When the nine-year-old tried to retrieve his favourite toy, he was electrocuted with eleven thousand volts of electricity. The accident resulted in doctors having to amputate his left arm, and both his legs, because they were irreparably charred.

His parents were told that he was not likely to survive, but they refused to listen. “My father and mother were my biggest support during this period. It is their willpower that kept me alive and helped me survive this accident,” says Tinkesh, adding that his family did their best to ensure he returned to his routines.

“I had to undergo treatment for three years. Throughout that time, my mother, used to pick me up in her arms and take me to school. I had to sit in the classroom the entire day. I couldn't play with my friends or do anything other kids my age would do. It was a challenging situation, but my friends were also supportive and spent time with me, which made me feel better,” says Tinkesh.

Despite facing financial hurdles, his parents got him an artificial leg in 2012. It was after this that he started moving around independently. “I was not allowed to do any strenuous physical activity but managed to travel to college alone,” he says.

After graduating in 2015, Tinkesh spent a year trying to find a job, but had little success. He also says that he found the lack of physical exercise due to forced inactivity had resulted in him gaining a lot of weight.

“I decided to focus on my fitness and started learning about my body and the things it could do. I heard people around me talk about my incapability to do any kind of work, but I concentrated on improving my physical activity without paying them any heed,” says Tinkesh.

The turning point was when he was sponsored for prosthetic legs by Hyderabad-based Aditya Mehta Foundation. The sponsorship came after Tinkesh uploaded a video of a two-kilometre marathon he participated in on Gandhi Jayanti went viral. In the video, Tinkesh had made an appeal for prostheses.

From that point on, Tinkesh said he began focussing on his fitness journey and started swimming and cycling. Tinkesh, who dreamt of representing India in the Paralympics in cycling, had to give up on that dream because it was too expensive.

“It was at this point that I was introduced me to FITTR in Pune, and I decided I would become a fitness instructor. I started training under the coaches there. They really pushed me to help me achieve my fitness goals.”

There were challenges along the way and Tinkesh suffered knee and shoulder injuries. It was demotivating but his trainers continued to encourage him. “It is because of them that I could reach my goals and even participate in the FITTR Transformation Challenge for the first time this year after a category was introduced for specially-abled people. It was heartening to see so many people participate in the challenge.”

Tinkesh says that this is just the beginning of his adventure. “My fitness journey has just started, and I have been appointed Athlete Ambassador - ICN India. I will be participating in all their shows and, scaling up my fitness levels. In June, I will leave for Ladakh and volunteer to teach disabled people through my life experiences. I also have dreams of scaling mountains in Australia later this year.”

Tinkesh says he is fortunate to have impacted many lives through his fitness journey. He frequently receives mail from people he has inspired. His own inspiration and greatest support, he says, has been his mother. “She has been a driving force throughout my journey. My coach Kamal Sharma is the other important person behind my transformation. His unwavering faith in me and selfless dedication to my cause helped me stay motivated.”

Despite achieving so much, Tinkesh feels that there needs to be more access to fitness facilities for people with disabilities. “Trainers aren't willing to attend to people in wheelchairs or to amputees. Gyms aren't equipped to deal with disabled people, and trainers lack any knowledge of inclusivity. Last month, I was denied entry into a gym in Pune, and this is a phenomenon across India.

Being a disabled person, I had to figure out various ways to train myself. It was only after meeting my coach Kamal Sharma, that I got any help. He shared multiple videos that assisted me in using my single arm to achieve full core strength. “It is because of people like him that I have reached my full potential,” he says.

To prove that there are no limits to what he can do, Tinkesh holds the record for being the first Asian triple amputee to bungee jump at Canyon Swing in Nepal, a drop of 160 m.

He has also achieved his dream of becoming a fitness trainer in Pune, helping people with and without disabilities. Reflecting on his journey, Tinkesh says, “​​Opportunities I had dreamed of are coming to me without asking. My potential has been unlocked, and my achievement is being recognised and appreciated; this in itself is very empowering.”