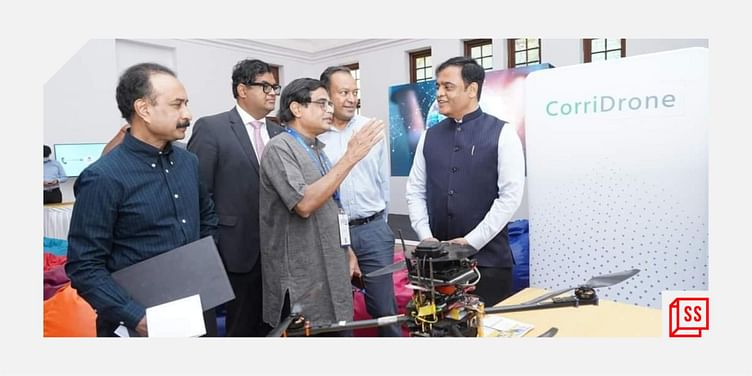 Set up by IIT alumnus Umakant Soni in 2020, ARTPARK is working to create a collaborative consortium of partners from industry, academia, and government bodies to promote AI and robotics-based tech innovations.

A study by PWC titled “Artificial Intelligence in India-Hype or Reality” says that India, with the help of data and AI, can become a $5 trillion economy by 2025. However, AI needs to be extensively utilised in all sectors, ranging from agriculture, MSMEs, and financial services, to healthcare, energy, and logistics, to create a vibrant AI economy.

This formed the genesis of Bengaluru-based ﻿ARTPARK﻿, which is an acronym for AI and robotics technology park. The not-for-profit foundation was set up in 2020 by Umakant Soni, Bharadwaj Amrutur, and Subhashis Banerjee in collaboration with the DST (Dept. of Science and Technology) and Government of Karnataka (GoK).

Promoted by the IISc (Indian Institute of Science) and supported by AI-foundry, ARTPARK is seed-funded by DST and GoK to the tune of $32 million to help translate cutting-edge research into solutions that can have an impact on the society.

ARTPARK intended to create a collaborative consortium of industry, academic, and government partners. These innovations are aimed at creating a societal impact by carrying out various R&D projects across industries, including healthcare, education, mobility, infrastructure, agriculture, retail, and cybersecurity.

For almost a decade, Umakant worked in the artificial intelligence (AI) space as an entrepreneur and investor. One of the technology advisors for Government of India initiatives like NITI Aayog, DST (Department of Science & Technology), and MEITY, he helped create the "idea to impact" AI innovation engine for India.

An IIT-Kanpur graduate, Umakant currently advises Fortune 500 companies on AI strategy, investing, and disruption. He is also a keynote speaker on developing impact via AI and deeptech innovations in emerging markets. Previously, he has served as the Director, Science-inc India, a leading global startup studio.

Under his leadership, ARTPARK is supporting many startups, which have the potential to change the way we consume services and impact millions of lives.

“I've been looking at the AI space for almost 12 years now, first as an entrepreneur and then as an investor. I realised that if you just have an IP in AI, which is held by companies only looking for optimising profit, it may not actually work out in the long run.

"To create a long-term perspective, it is very important to understand systems that are sustainable. So, if we codify that in the form of AI, we could possibly provide the right future for mankind where man and machine can co-exist,” Umakant explains.

He adds that autonomous machines should co-exist with autonomous human beings. Even if it is a 60-year horizon, we must do that, he adds.

ARTPARK focuses on problems relevant to India and the developing world and strives to address them with innovative solutions.

To achieve this goal, it keeps generating new learning opportunities for the Indian youth, through which they can nurture, build, and showcase their skills to the entire world, and become future-ready to tackle real-world problems with technology innovations.

The not-for-profit reaches out to startups through the ARTPARK innovation programme.

“AI and robotics are a lonely field. There are only a few funds that are specifically into AI companies. So, startups, especially those focused on AI and robotics, don’t get much support from the ecosystem. We launched the ARTPARK innovation programme through which we support AI and robotics startups early on,” Umakant tells SocialStory.

With the belief that confidence in a startup can lead to a much bigger ecosystem, ARTPARK, through these programmes, invests in them and supports them or works with them in bringing these products to market.

More than 12 companies are working across sectors like telecom, healthcare, drones, logistics, and education under the ARTPARK innovation programme. ARTPARK has also declared a $100 million venture fund to support startups.

Some of the startups that are part of ARTPARK’s cohort include STEMpedia, which is focused on promoting AI and robotics among students; Biodesign Innovation Labs, which is producing portable and affordable life-saving innovations to solve ventilator shortage; and CD Space Robotics, which provides AI solutions for logistics and ISR applications.

ARTPARK, is now working on several innovations and projects to inculcate AI in various fields, especially in healthcare and education. It is also trying to bring internet connectivity in villages by building an open-source model of centralised telcos.

(This story was updated to correct the name of the report to “Artificial Intelligence in India-Hype or Reality”.)