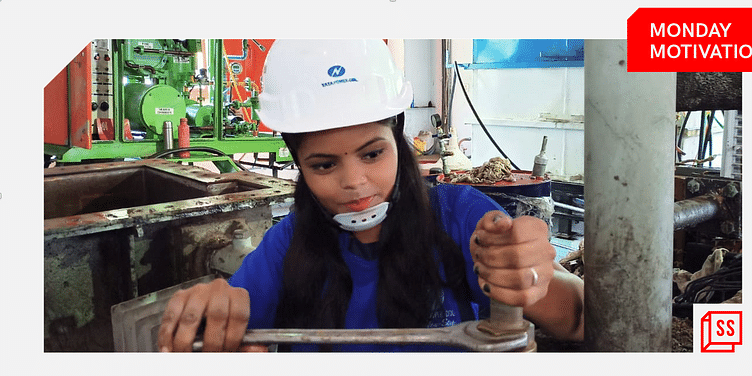 Roshni, who works as a junior technician with Tata Power, says more women should train in technical work.

Some of Roshni’s earliest memories are of growing up in her maternal grandmother’s house after her mother died. “I was still only a few months old, and my father and his family did not want me,” says the 24-year-old, who prefers to use only a mononym to distance herself from her father’s family. Since then, she has been raised by her maternal grandmother and aunts, who despite financial hardships, took good care of her and educated her till Class 12.

“I had to stop my formal education after graduating from high school because there was no money left to educate me. I stayed home for two years–between 2015 and 2017–before they could afford to again,” says Roshni, who finds it difficult to look back at those challenging times.

In 2017, she enrolled herself in the Delhi Government’s Industrial Training Institute (ITI), Pusa. “My relatives told me about this two-year Skill India course and encouraged me to sign up. I studied hard and did well, so even before my second year was over, I was recruited by Tata Power as a technician.”

She has now been with Tata Power for more than three years. “I graduated in August 2019 and joined work in October,” she says, before adding that she is the third person from the ITI to get recruited by Tata Power.

Roshni says this is only the beginning of her journey. In addition to a full-time job, she has enrolled for a part-time diploma in the electrical trade from the Aryabhatt Institute of Technology, Delhi, an affiliate of the Board of Technical Education. “With the diploma, my next dream is to become an Assistant Officer or Junior Engineer at Tata Power,” she says.

As part of her job, she repairs and maintains transformers, and conducts tan delta, BDV (Breakdown Voltage Test), and resistivity testing. When she becomes a junior engineer. Roshni will take on additional responsibilities that include managing supply and supervising junior technicians.

“I have recently given an interview for the position of a senior technician and it went well, so I hope I get my promotion,” says Roshni, who has won several awards at Tata Power.

“I have won Employee of the Month twice, and been nominated for several project-related awards at the national level. I was also featured in Tata Power’s Women of Will video series,” she says.

She wishes that more women joined ITIs and trained for technical jobs. “There were only around six girls at the ITI when I studied there. Women should not be told that some jobs can only be done by men. Who says we can’t climb electrical poles and do maintenance work? We can shine in any field in which we give our 100 percent. We can also outshine the men if we put our minds to it,” she says.

Roshni feels very lucky that she grew up in the home of her maternal grandmother who has always supported her in whatever she did. “I also get a lot of encouragement at work and have never faced any challenges or discrimination from my colleagues,” she says.

When asked what she dreams of becoming, she pragmatically replies, “I would like to finish my diploma and become a junior officer. After that, I will decide on my next goal. I think it’s best to focus on one-short term goal at a time to move ahead at a time,” she says.

(This story has been updated to include Skill India)