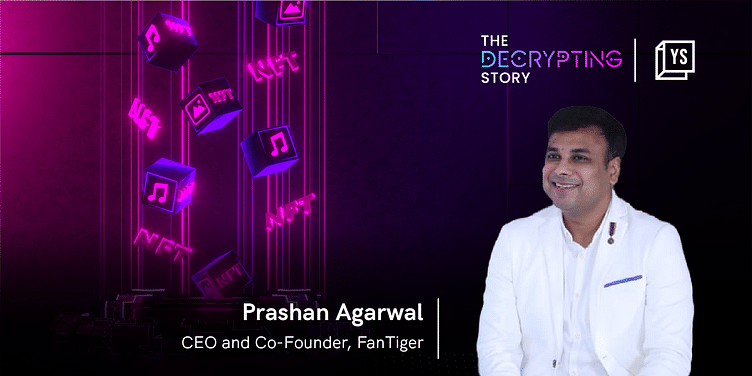 Started by Prashan Agarwal, FanTiger connects artists with fans through NFTs. Owning a fractionalised NFT of a song allows the holder to earn royalty income based on song’s performance on Spotify, YouTube, Gaana, etc.

Prashan Agarwal, ex-CEO of Gaana and Co-founder of ﻿PropTiger﻿﻿, believes NFTs (Non-Fungible Tokens) will achieve mainstream adoption if they have strong utility and incentives for users to own them.

A music industry veteran, Prashan identified potential in creating an NFT platform where buyers could own a piece of a song and earn royalty income based on its performance.

Buyers could also use the NFT to access exclusive rewards (such as meet and greets with their favourite artists, and also potentially resell the NFT on a secondary marketplace to earn a higher return on their investment).

With this vision, Prashan is building ﻿FanTiger﻿, a platform to connect independent artists, creators, and musicians with fan communities through NFTs.

“With music streaming, artists typically hand over copyright and royalty income to platforms and record labels, and they work on a fixed fee. As a result, their income is reduced, and they end up making most of their income (up to 90 percent in many cases) from events. With FanTiger NFTs, artists and fans can directly own music rights and IPs, earn more through royalty income, and get more upside.”

To build the platform, FanTiger earlier this year raised $5.5 million in a seed round led by Multicoin Capital. Other investors in the round included ﻿Krafton﻿, Pravega Ventures, GAMA, ﻿Woodstock Fund﻿, IOSG Ventures, Polygon Studios, as well as Sandeep Nailwal (Co-founder of ﻿Polygon﻿), Gokul Rajaram, Prashant Malik, and Miten Sampat.

The platform has already signed up with artists such as Sunanda Sharma and Naalayak for their music releases. It claims to have several more partnerships in the pipeline, with a focus on music in languages such as Punjabi, Tamil, Marathi, Bhojpuri, and more.

How STAN is building an NFT universe around esports in BGMI (PUBG), Free Fire, and more

On the artists’ side, FanTiger is a way to raise funds for and earn income related to an upcoming song launch.

For instance, the platform will seek to raise anywhere between Rs 3 lakh to Rs 35 lakh per song based on the magnitude of the artist.

The funds are raised by fractionalising the ownership of the song into hundreds or thousands of NFTs and selling them to fans of the artist.

“We start with Rs 499-Rs 799 as a sweet spot of entry for fans to buy an NFT of an upcoming song. Let’s say we are able to sell 2,500 such NFTs and raise Rs 25 lakh for the artist. This way, the artist gets a chance to earn revenue directly from fans, as opposed to the traditional mechanism where streaming platforms and record labels take up most of the income,” Prashan says.

FanTiger takes a two percent cut on the funds raised.

It also encourages and helps artists to host meets and greets, video calls, and other unlockable content for owners of the NFTs, thereby empowering creators to build their fan communities.

When the song is streamed across YouTube, Spotify, Gaana, Apple Music, and other streaming platforms, it earns royalties based on its performance. These royalties are distributed back to the artist and the fans.

“45 percent of the royalty income goes to the artist. 45 percent is put into our royalty vault for our fans. And the rest (10 percent) is our cut,” Prashan says.

“Sticking with the same example, let’s say the song has a good run online for three months, and earns Rs 40 lakh in royalty income for the fans. This is allocated to the existing 2,500 NFT owners, and amounts to a return of around Rs 1,600 per holder. There is also a chance for future income beyond the three months, since the song will continue to stream across platforms,” he elaborates.

Estate Protocol wants you to own land via NFTs, here’s how

FanTiger is also building a secondary marketplace where holders can sell their NFTs.

Here, prices are determined based on supply and demand. But Prashan believes these NFT prices won’t be as volatile as many rare, high-value NFTs that are sold for several hundred thousands of dollars on the likes of OpenSea.

“The NFTs generate cash flow from royalty income, and also provide exclusive access to artists. Further, there are several hundred or thousand NFTs per song. With all these elements coming together, a user from the previous example could perhaps sell their NFT (which cost them Rs 799) for Rs 8,000 to Rs 10,000. These are not NFTs whose value skyrockets from Rs 1,000 to Rs 1 lakh for no obvious reason,” Prashan explains.

The secondary marketplace is currently in the works, and once live later this year, will feature a 5 percent platform fee and a 5 percent commission paid to the original artist. The seller keeps 90 percent of the final sale price.

Finding the right balance between supply-demand pricing and embedded value in the NFTs is perhaps FanTiger’s most important goalpost to aim for. This is especially true because the Indian NFT market has seen muted traction and limited sales, despite the involvement of several A-list celebs across cinema and music.

For instance, Amitabh Bachchan’s entire NFT collection sold for under $1 million, while global projects such as CryptoPunks and Bored Ape Yacht Club (BAYC) have sold NFTs for millions of dollars each.

Several homegrown projects such as WazirX NFT Marketplace, Diginoor, Rario, Vibranium, Swaraj Projekt, and more have also been innovating in the segment, looking for new ways to crack the Indian NFT market.

A new class of NFTs

For Prashan, a new class of cash-flow generating NFTs could turn the tide and perhaps convert the value-conscious Indian market into NFT investors.

“There are many NFT projects that focus only on supply-demand. There’s no underlying asset backing the NFT. However, the market is large and many startups have the freedom to explore interesting ideas. Given we understand the space well, we feel we are positioned to lead the disruption,” he says, adding:

“With FanTiger, holders can not only earn royalty income, but also stand to gain maximum upside by backing upcoming or relatively unknown artists early on. This way, we can create a new asset class for music fans.”

FanTiger is also tinkering with the idea of NFT baskets, where users can invest in a range of NFTs with a central theme.

The broader vision is to establish a Do-It-Yourself (DIY) platform for creators to engage directly with their fans, where both sides stand to gain financially. And this vision is not limited to music - in fact, Prashan believes a similar formula can be extended to TV series, movies, or other multimedia content formats on the FanTiger platform.

“We strive to bring one lakh artists and one crore users to the platform in three to five years,” he signs off.