With Tegro, WazirX founder is making it easy to buy and sell blockchain game assets 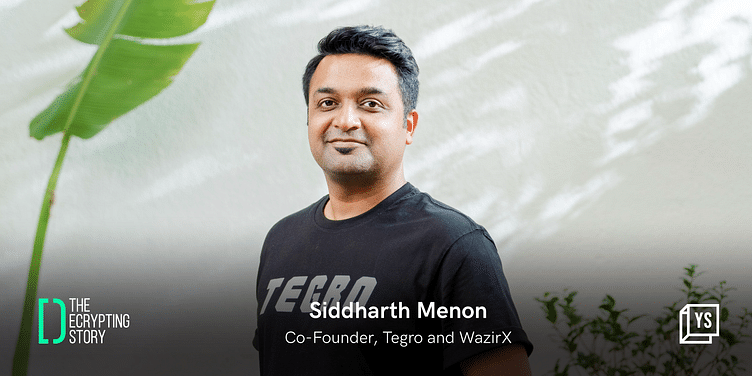 In 2021, as the crypto market boomed, millions of retail investors made their first crypto purchases on exchanges such as ﻿Binance﻿, ﻿Coinbase﻿, ﻿WazirX﻿, ﻿CoinSwitch Kuber﻿, and ﻿CoinDCX﻿.

A crypto exchange is essentially an entry point into the world of cryptocurrency. WazirX Co-founder Siddharth Menon—a gamer since his early years—believes there needs to be similar entry points into investing in Web3 games.

“Capital inflow needs to be solved for any industry. We believe in the Web3 gaming industry and building a centralised exchange, where pro and institutional traders can invest and trade in game assets,” Siddharth tells The Decrypting Story in an interaction.

Web3 game assets are in-game digital assets, including virtual crops, land, resources and weapons, which may or may not be non-fungible tokens (NFTs).

However, no exchanges are available for users to invest in a wide range of Web3 game assets. On a crypto exchange, users can only buy crypto tokens powering Web3 games, such as AXS and SLP from Axie Infinity.

This is where Tegro comes into play.

“People playing a Web3 game would use the in-game marketplace. However, several folks want to invest in these assets but not play the games. Investors buy assets not to consume them,” Siddharth explains.

He says, “One person may want to invest in assets from five or ten Web3 games, but the person is not going to play all those games. Such investors need a marketplace, where large sums of money can be invested in several Web3 game assets.”

Blockchain gaming: The rise of dynamic NFTs in P2E games

Mainstream, minus the mistakes

True for all capital markets, Siddharth believes retail investors will also create importance and value for Web3 gaming, an industry that grew by 2,000 percent in 2021, according to a DappRadar and Blockchain Game Alliance report.

As per the report, the blockchain gaming space in Q1 2022 alone saw investments of $2.5 billion pouring into the sector, compared to $4 billion raised in the entirety of 2021.

Despite being a hot sector, Web3 gaming is a nascent industry and is prone to mistakes. So far, the confusion for blockchain games has revolved around where to apply Web2 gaming principles.

Over the years, Web3 game developers have learnt to aim for Web2-like, high-quality gameplay and graphics. However, a Web3 game’s success or failure does not depend only on the gameplay.

Blockchain games promise players a higher degree of ownership over in-game assets, where players can seamlessly trade assets. Simultaneously, strong fundamentals are required to ensure the game economy can sustain itself.

“Any asset, without the right fundamentals, will fail. Most existing Web3 games are not sustainable. One major reason is that they over-rely on NFTs, and the liquidity for NFTs dries up during bear markets,” Siddharth explains.

He adds, “Most blockchain games start with NFTs, and when players cannot buy and sell in-game assets due to lack of liquidity, they lose faith in the game. Also, buying NFTs in bulk is difficult, and there’s a lot of friction if a user wants to buy 10,000 NFTs at once, for example. By design, NFTs have this problem, and they can’t scale.”

At the outset, FTs seem counterintuitive as they are easily interchangeable, have a high supply, and are not rare. They have not received mainstream popularity like the NFTs.

“Using the analogy of Maslow’s Hierarchy of Needs, we can identify how demand works. Minimum requirements form the need-based economy, such as food, water and clothing. In Web3 games, these are the most fungible assets (FTs) and feature the most supply. Games cannot run without these assets. For example, a virtual farming game cannot run without virtual crops, water, livestock, etc.,” Siddharth explains.

After the need-based economy comes the want-based economy. Assets in this class are not basic needs but are good to have, such as a car. In the same virtual farming game, these may take the form of virtual farms, windmills, large warehouses, etc.

“Finally, there is the achievement-based economy, such as a supercar, an expensive watch, or a painting. They are expensive and low in supply. In Web3 games, these rare digital collectables take the form of NFTs. So far, games have been tailored only toward these economies, which has not worked for them when liquidity dries up or when there aren’t large numbers of new players joining each day,” Siddharth says.

Therefore, Web3 games need to build for the need-based and want-based economies in order to be sustainable. And FTs, which represent assets in these economies, will play a critical role.

Tegro believes it can empower games to adopt FTs in the right manner to ensure a high frequency of utility, reliable liquidity, and sustainability.

More importantly, it realises the important role it has to play as an ecosystem enabler and has come up with ‘Tegronomics’—an open-source economic framework for building sustainable Web3 games.

Tegronomics proposes the use of FTs as a core element of economy design, enabling Web3 game designers to think of the sustainability of the economy above everything else.

Using these principles, Tegro is incubating Web3 games and helping them structure their approach around Tegronomics.

CropBytes, a leading virtual farming game, is a success story of a Web3 game that leveraged Tegronomics to achieve sustainability and land over 500,000 players.

“We have 12 games in our first batch. For the listing, we will start with six games. We are ensuring a sustainable economy template that will take them away from over-reliance on NFTs, and more towards leveraging NFTs and FTs in a healthy ratio, building predictable supply and liquidity, and service economies and economic governance models in these game marketplaces,” Siddharth explains.

It will also create Tegro’s first channel of revenue—fees from trades on the exchange. “Eventually, there will be more ways to make revenue,” Siddharth says.

He also believes that the 15-member team at Tegro, which is building a gaming ecosystem rather than a singular product, does not have a direct competitor.

“We have indirect competitors for different parts of the ecosystem. For example, while there are horizontal marketplaces that offer game tokens, we are building the world’s first game asset marketplace for institutional investors,” Siddharth explains.

Learning with Annie: How Thinkerbell Labs is rethinking assistive technology for the visually impaired