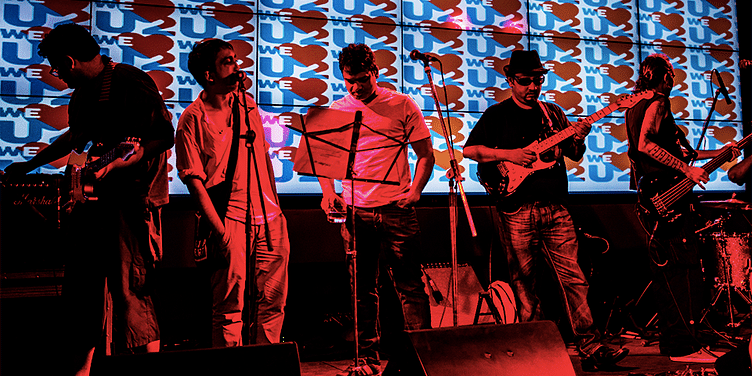 Krishnan Chatterjee, CCO and Head of Marketing, Indian Subcontinent, SAP, talks about his band ‘Contraband’, which sings about day-to-day experiences from the corporate life

Life is not living when it’s really planned

These lines are from the song ‘Contraband’, performed by the band with the same name, and written and sung by Krishnan Chatterjee, the lead vocalist.

Krishnan, however, is not your regular rockstar.

The Chief Customer Officer and Head of Marketing of the Indian Subcontinent at SAP by the day, Krishnan dons the hat of a rockstar by night.

But the two avatars are not mutually exclusive. One complements the other, says Krishnan, who calls Contraband’s genre of music ‘white collar rock’.

“All the material for Contraband is written out of the job, and day-to-day experiences from the corporate life. My music and my job, they feed each other,” says the IIM-Ahmedabad alumnus.

The band, which consists of “hardcore corporates and hardcore musicians”, performs original music that is composed and written by them. However, at times, they do shows for iconic bands such as U2 as a tribute.

The band members are a mixed bag, with the youngest member in his 20s, and the oldest in his 50s. Krishnan is in his 40s.

While the band was a seven-man show, it became a five-member team after two of its members - Nitin George (rhythm guitar) and Kalyan Kumar aka KK (percussion) - moved overseas.

Krishnan and Udayan grew up together in Kolkata, and were part of the musical circuit. The duo also worked together at HCL Tech in Noida.

“Udayan, Avik, KK, and I were all working at HCL. We knew about each other’s musical interest, and one day we just decided to go to the basement conference room after work at HCL’s Noida office and jam,” Krishnan reminisces about the conception of Contraband.

Chef Ranveer Brar’s journey from the streets of Lucknow to becoming the youngest chef at a five...

Though Contraband sings in English, the lead vocal was not always exposed to western music. In fact, Krishnan reveals it was during his undergraduate days at Kolkata’s Presidency college that he actually got introduced to English music through friends.

It was also during this time that he learnt to play the guitar from his friends in college.

Krishnan’s first stint as a solo singer was during college fests while at Presidency. In the early days, when he had not picked up the strings yet, Bollywood music director Pritam, who was his senior in college, used to play the guitar for him on stage.

Krishnan’s entry into a music band happened when Calcutta National Medical College’s band Spasm heard him sing at an event and asked him to join the band. And thus, Krishnan joined his first band and became the only non-med school member of Spasm.

However, before college, it was director Satyajit Ray and his music that had a profound influence on him through movies like ‘Goopi Gyne Bagha Byne’ and ‘Hirok Rajar Deshe’. Krishnan says, “The Anup Ghosal (singer for these movies) - Satyajit Ray (he directed as well as composed the music) combination had a lasting impact on me.”

In terms of song writing, he says that words penned by George Michael in the 90s are his greatest influence.

According to Krishnan, Contraband’s first stage performance happened quite by chance. Silicon Valley-based non-profit The IndUS Entrepreneurs’ (TiE) Delhi chapter was having an event in Delhi’s Maurya Sheraton hotel, and had “asked HCL to sponsor some entertainment.”

It was then that Contraband turned up to play. This was in 2009, around the same time the band was formed. Since then, they have played over 25 gigs. They also launched their first album ‘Currency’ early this year.

According to Krishnan, even internationally, there is no precedence for the genre, making them the pioneers of this style of music. The lyrics speak of the various expectations and realities of an individual in a white-collar job.

“Rock music is typically a blue-collar phenomenon. We don’t have the wherewithal to do blue collar rock because our life experiences are very different. We are not railing against the system. We are the system, belonging to a world of privilege, and seeking self-actualisation. So, we are railing against ourselves, or definitions of success and achievements,” he explains.

Krishnan is the lyricist for the band, but it was not until he was in his 30s that he realised he could write songs such as these chorus lines from Contraband’s song ‘Sigh’.

"I would not go where the moment would lead

On legs of stone my hands would freeze

The future's in a language I cannot read

And I never found a moment I could seize