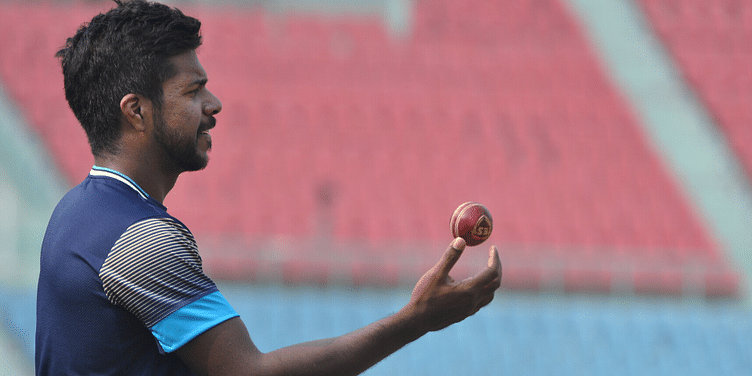 Being a fast bowler takes precision, skill and a deep desire to get better at the game everyday, and Indian cricketer Varun Aaron is a true example of this

The IPL may have taken a back seat due to the COVID-19 lockdown, but that has not prevented cricketers from staying fit and recuperating indoors.

Cricketer Varun Aaron, who came into the spotlight when he bowled at 153 kmph in the 2011 Vijay Hazare trophy finals, has delighted the hearts of many cricket fans across the world.

At a time when Indian cricket needed a pace spearhead who could lead the attack, Varun burst on the scene and made his presence felt.

With a run up like a cheetah, his thrilling pace and his ability to quickly challenge opposing pace attacks has made him one of the most respected stars of the cricketing galaxy

In an exclusive interview with YS Weekender, Varun talks about his early inclination towards sports, his passion for fast bowling, and how he did not let injury deter his spirit.

YSW: With the COVID-19 lockdown and everyone cooped up in their homes practicing social distancing, how is this effecting athletes and cricketers worldwide?

VA: It is definitely affecting athletes and cricketers worldwide, because we are now confined to gyms, and are isolated indoors with no team sports that we can take part in. The IPL has also taken a backseat now.

However, this lockdown has given sportspeople an opportunity to get some time off. I feel most sportsmen and sportswomen who play high level sports don’t get much time off, and their bodies go through a lot of wear and tear.

So, this is a really good time to rest, recuperate, and work on areas, which you wish to work on which you would otherwise not be able to if you were on the road.

YSW: Were you always passionate about sports and cricket since a young age?

VA: Yes, I was always passionate about sports and cricket even as a kid. I grew up in Jamshedpur, a town, which is known for sports and sports lovers.

There is a huge sporting complex in Jamshedpur called the JRD TATA sports complex. I grew up quite close to the complex and used to spend most of my time there.

In school, I used to play a lot of American handball, volleyball as well as football for the school team. After playing a few sports, I discovered that I was the best at cricket, and have stuck to it.

YSW: What was the cricket scene like in your teenage years?

VA: Jharkhand is one of the newer states in India, and when it got separated from Bihar, over 20 years ago, they cut down the number of districts that could participate in cricket.

It was never really a powerhouse of cricket, however over the last 10 years, we have improved and won domestic competitions.

Growing up, there were a couple of places we could go and train well, that were not state-of-the-art, but the basics were really good. The Keenan stadium was an international venue, and that’s where I used to practise.

It had a really good outfield and wicket, which was always available. I was lucky to always have access to the best facilities in Jharkhand as I was living in Jamshedpur and not in Ranchi or Dhanbad or Bokaro or other places like that.

YSW: How did you first get spotted, and what was the feeling like when you got selected for the India Under-19 camp?

VA: I was first spotted when I was 14 years old. Back then, we used to have TRDO, the talent research development office, watching all the junior games.

One of the TRDO’s really liked the speed at which I bowled, and he recommended my name to the MRF Pace Foundation for trials.

At the age of 14-15 years old, I went to Chennai, and that’s when I got selected for the Foundation. That’s where I have trained ever since, and still continue to do so.

It was here that my journey started and where I got to interact with Australian legend Dennis Lillee and many other fast bowlers who used to come there.

And when I got selected for the India Under 19 camp, it was after a very tough but good season, and I was thrilled.

Funnily, that was the only year we didn't have an overseas tour. There was supposed to be one to England, which got cancelled. Nevertheless, I was so thrilled to just be there, and be a part of the India Under 19 camp.

YSW: Did you ever envision that one day you would be playing for team India? And that you would play for a number of IPL teams, such as Bangalore Royal Challengers, Kings XI Punjab, and now Rajasthan Royals?

VA: Yes, I did envision myself being a part of the Indian team, which was a driving motivation throughout, and has been from the time I was 17-18. It was at this age that I really believed and felt that I had it in me to represent my country.

I have played for quite a few franchises, and have really enjoyed my experiences with each of them. Just meeting various players from all around the world, interacting with them, and making friends has been worthwhile.

Pet guide: Here’s how to take care of your pets during the COVID-19 lockdown

YSW: What was your family’s reaction when you decided to become a full-time professional cricketer?

VA: My family has been really supportive, as they understand sports well. My mother played basketball for Bihar and Karnataka University, and my grandfather played hockey for Bihar.

They never had a problem with me playing sports, however they always had one condition, I had to do well in my studies in school. Only then would they give me permission to spend almost the whole year playing cricket.

It was only one condition, but they were really supportive.

I can’t ask for a better family.

My dad always used to chip in whenever it came to my practice sessions. He used to drop me off at the stadium, and throw cricket balls for hours, to help me with my batting.

When it came to my fast bowling, my father helped me a lot by introducing me to old films about West Indian fast bowlers back in the 70s and 80s. My granddad too was really supportive and would be there for almost every single match. Just like a spy sitting in the corner, he would watch every single game of mine as a kid.

YSW: Injuries are a part of every sportsman’s life, and you are one of the few who has managed to successfully bounce back after an injury. What is the one thing that kept you motivated throughout your recovery period?

VA: Injuries are definitely a part of the game, especially when you are a fast bowler and are trying to bowl above 145 clicks. It does make your body move in ways in which it wasn't designed and puts unnatural force in certain areas.

Injuries for me have taken a few years of cricket away. I have had around 8 stress fractures in my back in my years from the age of 18-25 which set me back for 3 years, as I could not play and had to recover from injury.

However, I have been very lucky to have a supportive family, my wife, and my good friends who have been there for me when the chips are down. I have also been blessed to have so many wonderful trainers and physiotherapists who have helped me, be it at the MRF Foundation or the National Cricket Academy in Bengaluru.

It has taken a lot of mental toughness and endurance to come back to form from these injuries, but I have also been very blessed to have a great support system that helped me bounce back.

YSW: You have played 9 tests so far for team India and over 80 T-20’s and counting, what has been the most memorable cricketing moment for you thus far?

VA: Getting my test cap back in 2011. Every cricketer in the world aspires to play test cricket and to get that number which is permanent and cannot be taken back from you. So, getting my test cap is the most memorable and biggest moment of my sporting career.

YSW: What is your advice to other young aspiring cricketers?

VA: I would just like to tell them to enjoy the game, I feel kids nowadays see the glitz and glamour of cricket and want to get to the top really fast, and this takes away the enjoyment of the game.

At the end of the day cricket is a sport, that is meant to be enjoyed. If you make it a profession too early, you will suck out all the enjoyment from the game.

For example, if a 14-year-old kid is thinking of cricket as a profession and does not focus on the game, he or she will lose the love of the sport by the time they become 20-23. They should always enjoy the sport.

YSW: What do you like doing most on the weekend during your free time, when not on the field

VA: I love cooking and food, as well as watching movies and reading a few books when I get the time. Of late, I have developed a keen interest in designing furniture and I am also going to start a small venture where I plan to reclaim old vintage radios and refurbish them.

YSW: Are there 1-2 home workouts or exercises that work for you that you can suggest to keep in shape?

VA: Do a lot of stair walking, running or climbing because almost everybody has access to stairs. Regular burpees will also keep you fit, as it is a full body workout, and will keep your aerobic capacity going and help you build strength.