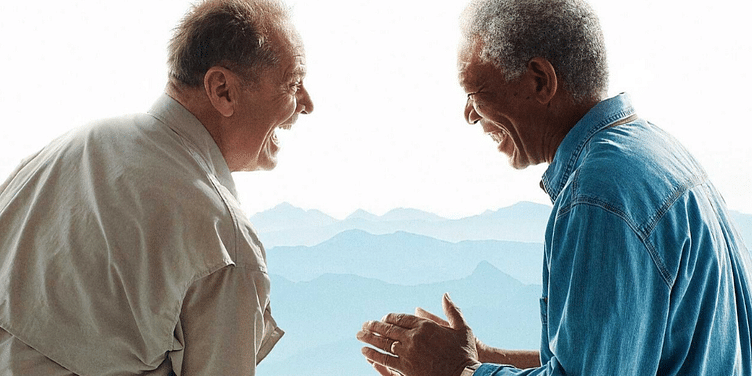 These are unprecedented times. The idea of a lockdown and being quarantined in our own homes makes us concerned about what the future holds. Here are some picks that can help make us see the bright side.

We are living in a time that we possibly couldn’t have ever imagined. Open a social media page or switch on the news channel; the only thing being talked about is the spread of the novel coronavirus pandemic. The mayhem, confusion, and the number of deaths are quite alarming.

If there is one thing that the pandemic has shown it is that we are all vulnerable at this time, and while that is a scary thought and brings feelings of gloom and doom, as well as hopelessness, all's not lost.

As it is famously said - human beings have a resilience that they don’t know of.

So in these times of hopelessness, YSWeekender brings you five movies that inspire hope and the will to move ahead:

A film about believing in yourself, finding purpose, and not losing hope, Life of Pi directed by Ang Lee is one that can be watched by both adults and children.

It tells the story of Pi Patel, a zookeeper’s son, who is the only human survivor of a shipwreck that takes place near the Mariana Trench in the Pacific Ocean. With him are an orangutan, a zebra, and an adult Bengal Tiger called Richard Parker.

After losing his family and being stuck in a lifeboat in the deep blue ocean for nearly 227 days, we see how Pi struggles to keep afloat, look after himself and the tiger, but manages with the few remaining supplies he has.

With a small notebook, cans of limited food, and a will to keep both Richard Parker and himself alive, Pi focuses on the present, but strongly believes that he will be saved. It is his positive mindset and belief in God that helps him achieve his goal.

Years later, as an adult, Pi narrates his journey of grit and perseverance to an aspiring writer, and tells him that ‘he has a story that will make him believe in God.’

Life of Pi is based on Yann Martel’s popular novel of the same name. It stars Suraj Sharma, Irrfan Khan, Tabu, and Adil Hussain in leading roles.

Popular lines from the film include, ‘You must take life the way it comes at you and make the best of it.’

“You might think I lost all hope at that point. I did. And as a result, I perked up and felt much better.”

James Franco starrer 127 Hours is based on the true survival story of adventurer Aron Lee Ralston, after he gets trapped by a boulder in an isolated slot canyon in Bluejohn Canyon, in Utah.

He gets stuck there for nearly six days, stranded without anyone around, however, holds on to the one thing that keeps him going – hope.

Battling with crippling pain from the boulder that crushed his right hand against the rock face, he records a video journal with his left hand.

He struggles to cut his arm free, but tries to amputate a little every day, until he eventually succeeds on the sixth day. He rushes to a family of trekkers nearby who call medical staff and the authorities for help.

While he reflects on the unfortunate circumstances of getting into this situation, he believes it is because he never told anyone where he was going.

Based on the survivor’s actual memoir ‘Between a Rock and a Hard Place’, 127 Hours, directed by Danny Boyle, will inspire anyone to get through life’s difficult circumstances.

Popular lines from the film include, “I’ve been moving towards it my entire life, the minute I was born, every breath that I’ve taken, every action has been leading me to this crack on the earth’s surface.”

“Adversity is the source of our deepest growth and greatest blessing, embrace it, dare to seek it.”

Featuring stellar actors Morgan Freeman and Jack Nicholson, The Bucket List is a film that should be on everyone’s movie list.

It tells the story of two elderly men who meet in a cancer ward after being diagnosed with lung cancer, and form a strong friendship.

Carter (played by Morgan Freeman), an amateur historian, has a knack for creating lists and creates a ‘bucket list’ comprising all the things he wishes to do before dying.

Cole (Jack Nicholson) sees this list and encourages his buddy to go ahead, and tells him that he will help sponsor travel for the two of them, after all, he has nothing to lose.

The duo decides to make the most of their remaining time by doing all that they have wanted to do. They go skydiving, visit the Taj Mahal in India, go on a wildlife safari in Tanzania, and have dinner at the prestigious Chevre d’Or in France.

The two become confidantes and best friends and confide to each other about their past experiences, hopes and dreams.

The bucket list is a feel-good movie that shows us that although death is inevitable, we can make the most of our time by living life to the fullest.

Famous lines from the film are, “One day your life will flash before your eyes, make sure it’s worth watching.”

“If life has taught me anything, it’s that 95 percent of the people are always wrong.”

A Steven Spielberg movie, The Terminal has Tom Hanks and Catherine Zeta-Jones, essaying the lead roles.

The story revolves around Viktor Navorski, a traveller from the fictional nation of Krakozhia, who is trapped in New York’s John F Kennedy International Airport.

The minute he lands in the US, he discovers that his passport is no longer valid as the US no longer recognises Krakozhia as an independent nation, after the outbreak of a civil war. Viktor, essayed by Tom Hanks, cannot return home or leave the country.

For nine months, Viktor settles at the Terminal with his luggage, befriends the airport employees and travellers; meets a flight attendant Amelia Warren (Catherine Zeta-Jones), and romance blossoms. He even finds employment by an airport contractor and is paid under the table.

While locked inside the terminal, Viktor finds love, hope, and peace for nine months.

Actress Julia Roberts takes us on a journey of what it means to live life fully on your terms. Eat Pray Love is a film that will bring happiness and hope to anyone’s grim day.

Based on author Elizabeth Gilbert’s best-selling memoir of the same name, the film is about one woman’s quest for self-discovery.

Liz is at a crossroads in her life. Recently divorced, she questions everything around her. Rather than wallowing in pity and self-criticism indoors, she decides to travel to places she has always wanted to, but has never been.

She goes to Italy, India, and Indonesia where she learns three important things that make her feel human again.

She learns the importance of nourishment and eating well in Italy, the power of prayer and belief in India, and attaining peace of mind and finding love in Indonesia.

“I'm choosing happiness over suffering, I know I am. I'm making space for the unknown future to fill up my life with yet-to-come surprises.”

At Slurp Studio, these chefs put food in the spotlight as they host team-building exercises for corporates