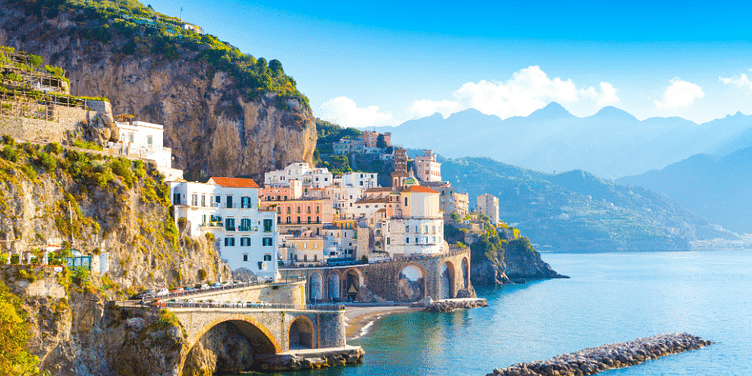 If you love history, culture, art, architecture, and Italy – not necessarily in that order – here are the 10 cities you must visit on your Italian holiday

As a student of architecture, after umpteen projects and submissions, one country stood out in my mind: Italy. Rich in history, arts, culture – and yes, architecture, Italy has a surfeit of historical destinations.

On a visit to this beautiful country, it’s possible to turn the pages of history in almost every other city. We list down a list that you must put on your to-do list if you love history, culture, art, architecture, and Italy – not necessarily in that order!

The Eternal City, built on seven hills along the banks of the Tiber River, is bursting at the seams with architectural splendours. Time for a Roman holiday? Explore the Colosseum, the elliptical amphitheatre at the heart of Rome and the Eternal City’s most famous tourist attraction.

The Pantheon is one of the best-preserved buildings from ancient times, as is the grand Forum Romanum. Take your time to explore the many churches - Il Gesu, S Giovanni, and Sta Maria Maggiore - and the Stadio Olimpico.

It’s a crime if you don’t (make a wish and) toss a coin into the Trevi Fountain. Stroll around the Piazza Navona, the busiest town square, and visit the Bernini Fountain. Ah, bliss!

Don’t Miss: A dinner cruise on the Tiber River which is the best way to soak in the architectural brilliance of Rome.

It may be sinking, but this city - dotted with canals, bridges, and historic buildings - is an ode to romance. The Canalazzo (Grand Canal), Venice's main waterway, splits the city and creates a network of canals.

A gondola ride may seem clichéd, but it offers a closer look at the beautiful canals, the palazzos and old buildings, the small archways connecting old buildings and sidewalks, the piazzas, and the colourful flowers spilling out of balconies.

The vibrant Piazza San Marco (St Mark’s Square) is the heart of Venice - and one of the most beautiful squares in Europe! Places to visit: Basilica di San Marco (a basilica that weds Byzantine, Islamic and western European architectural influences), Palazzo Ducale, and the 318-foot Campanile di San Marco (bell tower). There’s so much to do. Stroll on the Rialto Bridge, walk on the romantic Bridge of Sighs and explore the Gothic Doge’s Palace.

A landlocked sovereign city-state, this World Heritage Site is the home of the Pope.

The walled enclave has a population of about 1,000 people and is home to some of the most famous artwork in the world – St Peter’s Basilica and the Sistine Chapel. Stroll in the gorgeous 17th century St Peter’s Square, created by Bernini, and marvel at the semicircular colonnades. The Egyptian obelisk was put up during the reign of Caligula.

The St Peter’s Basilica, a late Renaissance church that can hold 60,000 people, has been described as “the greatest of all churches of Christendom.” Explore the Vatican Palace, the Pope’s residence, and don’t miss the Sistine Chapel (especially Michelangelo’s Last Judgement).

Don’t Miss: Stop off at not-so-frequented café on the roof of St Peter’s Basilica for a snack or drink, and a stupendous view.

Listed as a World Heritage Site, Pompeii and its sister city, Herculaneum, were completely buried in 79 AD after a two-day eruption of Mount Vesuvius. The ruins were accidentally discovered in 1592, and excavations continue till today.

Don’t Miss: Visit the Villa of the Mysteries, known for a series of frescoes that depict the initiation of a young woman into a mysterious Greco-Roman cult.

Taste maker to the nation: A tribute to the culinary legend, Jiggs Kalra

The capital of Tuscany, Florence is an elegant city on the banks of the Arno River. The Piazza San Giovanni and the Duomo (the Cattedrale di Santa Maria del Fiore) are delightful.

The nearby Baptistery of John the Baptist dates to the 11th century, and has three sets of striking bronze doors (Michelangelo said the doors of the Baptistery were beautiful enough to be the gates of Paradise).

Piazza della Signoria, Florence’s most popular square, is ideal for a slow amble. After lunch at a streetside cafe, stroll down the Ponte Vecchio (old bridge) and check out the many jewellery shops. Not to be missed: Andrea del Castagno's Last Supper fresco at San Apollonia.

Don’t Miss: Climb the more than 400 steps to the top of the Campanile, the bell tower in Piazza del Duomo, for a not-to-be missed view of Florence.

The capital of Piedmont is rich in culture and history. Renowned for its Baroque, Rococo, and neoclassical architecture, Turin, located on the Po River, is rich in churches, palaces, opera houses, piazzas, and museums. Turin (Torino) is also known as the home of football teams Juventus F.C. and Torino F.C., and Fiat, and the Shroud of Turin.

The elegant city centre is full of equestrian statues and arcaded streets, which means you need to see it on foot. Explore Piazza Castello, where you can visit Palazzo Reale (the magnificent former home of the Savoy dynasty), Palazzo Madama (once a castle, prison, senate house; now a museum), and the Duomo.

A cultural and economic centre, Padua offers a mélange of architectural monuments of religious importance. Start your journey at the Basilica di Sant'Antonio.

The grand church, often known as Il Santo (the Saint), is dedicated to St Anthony of Padua and has been a pilgrimage destination since the 13th century. Explore the Palazzo della Ragione, which originally housed Padua's courts.

The Basilica di Santa Giustina has magnificent works by Baroque artists. At the Scrovegni Chapel, the many Giotto frescoes include the tale of Mary and Jesus. Padua University’s botanic garden was created in 1545 for medicinal plants; today, it’s a lush spot of green that’s ideal for a moment of contemplation.

Don’t Miss: Perk yourself up with a cappuccino at Caffè Pedrocchi, a café that started operations in the 18th century.

The port city of Genoa is one of Italy’s most culturally alive cities. Explore the medieval city centre your way – walk through the narrow caruggi (a maze of alleys), stroll along the Piazza Banchi, or marvel at all the magnificent Renaissance and Baroque palaces that line Via Garibaldi (New Streets).

The cathedral encloses the Cappella del San Giovanni Battista, a chapel dedicated to John the Baptist. History geeks won’t want to miss Christopher Columbus' childhood home in Piazza Dante. End the day with a walk to the Lanterna, a lighthouse that dates to the 16th century, and watch the sun set.

Don’t Miss: Love the pirate life? Explore the Il Galeone Neptune, a pirate ship to learn about the life of a pirate in the 17th century.

A medieval hill town in the province of Siena, Tuscany, San Gimignano is famed for its striking medieval architecture and stunning skyline with 14 towers soaring high. The Piazza del Duomo houses one of San Gimignano’s biggest attractions - the Collegiata (cathedral).

The cathedral appears nondescript from the outside; the inside bursts with colours from 14th century frescoes. Walk along Via San Giovanni, a cobble-stoned pathway and the town’s main street. Explore the Rocca di Montestaffoli, a stupendous castle that has towered over San Gimignano since the 14th century.

Spook lovers are sure to enjoy the Museum of Mediaeval Torture.

Don’t Miss: Make your way up the Torre Gross, the tallest tower (54m) that dates to 1298, for superlative views of the picturesque countryside.

A hill town in the province of Perugia in Italy’s beautiful Umbria region, Assisi is the birthplace of St Francis, who in 1208 founded the Franciscan religious order.

This town seems straight out of a storybook – thanks to the narrow and steep lanes, stone structures, huge gates, and churches, monasteries and shrines (all built in the pink stone that characterises the town). The Basilica di San Francesco is a two-level church built in memory of St Francis (his body is interred in the crypt).

Other fine churches include the 17th century Chiesa Nuova and the Basilica di Santa Chiara. Basilica di Santa Maria degli Angeli houses a small chapel and the Cappello del Transito, which marks the spot where the saint died.

Don’t Miss: Lunch at Le Mandrie di San Paolo, a restaurant housed in an 11th century cottage. Apart from panoramic views, it serves up organic oil extracted from olive trees on the property.

Have an ice day: 5 Antarctic experiences to satiate your adventurous soul