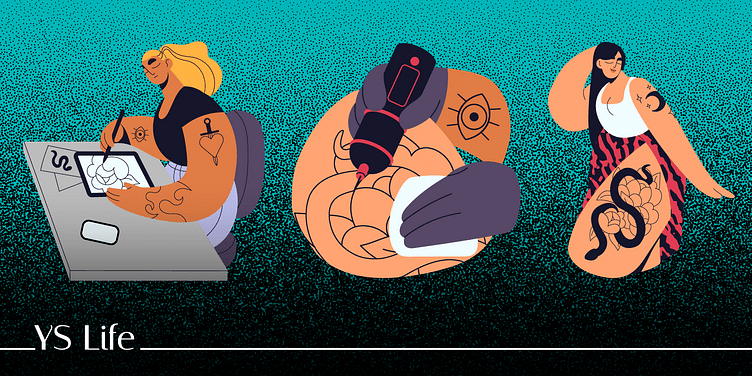 From Viking symbols to delicate finger tattoos and even ones inspired by video games PUB-G and Call of Duty, here’s what people are going in for.

What is it about a tattoo that can convey so much while spelling out nothing in letters at all! The simple ink design denotes a bunch of emotions and feelings, and is a language unto itself. Love someone? Say it with a tattoo! New job? New spouse? There’s a design just for that. And if you’ve broken up? Well, there’s a tat for that, too!

If you’re a tattoo newbie and wondering what to get, take cues from Hollywood stars. Selena Gomez and Nicola Peltz recently celebrated their friendship by getting matching tattoos. Blake Lively is said to be tempted by the idea of having a thigh tattoo of famous actor-husband Ryan Reynolds' face, Justin Bieber is said to have 56, and, of course, David Beckham is the king of them all with over 60 tattoos, each with its own unique meaning.

After a COVID-induced lull, the tattoo business is back and looks promising. The first-ever convention for tattoo artistes called Kula took place at the Bombay Exhibition Centre, Nesco, recently and brought well-known tattoo artistes together.

YS Life had a chat with a few of them to understand what makes a tattoo so inviting and what’s hot on their artistic radar in 2023.

No longer for rebels

There’s no legal age to get age a tattoo in India and no reason needed to do so, too! The buzz and crowd at the convention was proof of that, with tattoo booths seeing queues of people lined up and waiting to get inked.

Once seen as something rebels did, getting a tattoo is clearly more accepted now.

Celebrity tattoo artist Sameer Patange of Kraayonz Tattoo Studios affirms this as he shares how when he started out, almost  nearing a decade ago, people made inquiries about tattoos in a hush-hush way.

“If you were a corporate executive, there was no way you would risk sporting a large tattoo, but today it’s cooler and more accepted. Tattoos are becoming increasingly popular among young and old alike with doctors, head honchos, lawyers, and students asking for one.”

In India, tattoos have held religious and other significance for decades, being the norm in certain nomadic tribes. But in the nouveau age, they’ve evolved to making a fashion statement. With a mixed clientele of the young and old, Sameerhe admits there is a significant difference between the tattoos chosen.

“I think Gen Now prefers tattoos with inspirational words and even full back designs. They also get tattoos to show their love for a hobby like riding on a bike. The elder generation wants to make it personalised based on life experiences, often with a minimalistic tattoo. Interestingly, mandalas with geometric designs are everyone’s favourite,” Sameer says.

Being indigenous also holds sway in other ways as tattoo expert Sachin Arote of Lok Kala reveals how one of the style trends that keep recurring is the amalgamation of traditional folk art with modern interpretations. “Rich Indian calligraphy, kolam or rangoli, and yantra patterns are also back with a zeal,” he says.

The art of ink: how this celeb tattoo artist is popularising the art form

One of the most popular tattoo styles finds representation from the big screen and, of late, OTT as well. A few years ago, Star Wars and Harry Potter tattoos were big, followed by Lord of the Rings and the Avengers series. New inspiration comes from Goku from the Japanese anime television series, Dragon Ball Z.

Arun Alva, owner of Als Tattoo Studio, says tattoos from the dystopian fantasy film Divergent are in demand, especially the birds depicted in it.

“Another hot design is John Wick’s Latin tattoo Fortis fortuna adiuvat (fortune favours the brave). But if I had to mention one of the most popular designs, it would be Viking tattoos, thanks to the Thor films and other shows in this genre that we see today. From Norse-inspired valknut tattoos (that symbolise a slain warrior or a loved one who has passed on), shown by three intertwined triangles to Ingus, a Viking symbol that means ‘Where there is a will there is a way’, these are popular with men and women.”

He also shares how sports plays a catalyst when it comes to demand. When American basketball legend Kobe Bryant passed away, fans honoured him with tattoos of his jersey numbers. “And when Lionel Messi emerged as the star of the recent FIFA World Cup, we had people wanting his name engraved on their calf, back, and arms,” Arun says.

If you are wondering whether video game tattoos have lost their lure in the new age, that’s not so. As Sameer Patange informs, “Video games are just as popular as films, with people still requesting tattoos of PUBG, God of War, Call of Duty, Super Mario, Mortal Kombat, and Pokémon, to name a few.”

Wear it on your finger

While tattoos can have full-blown, extensive designs, if you’re not into flashing heavy arm band tattoos or chest/back designs, there’s a solution. Go subtle with something that’s barely there… a finger tattoo! Stars and moons, airplanes, hearts, and florals are most popular. They are especially apt as a romantic gesture between partners (remember how rapper Machine Gun Kelly and Megan Fox got matching finger tattoos?) The trend has got the nod from pop stars like Ariana Grande and Rihanna as well.

Internationally-known tattooist Fade Meraki from London explains how these are small, bold, yet delicate in their own way.

She says, “Although it is difficult to say if it suits everyone, it is typically chosen by those who want to go with a minimalist design. People typically get tattoos of someone's names or meaningful symbols. Commonly, siblings, best friends, and couples get matching finger tattoos. It's a great way to express yourself by keeping things simple; even with limited space, there's room for creativity.”

Sunny Bhanushali, celebrity tattoo artist and founder of Aliens Tattoo, shares the five styles that will be big this year. “Well-known figures continue to inspire people with Salvador Dali, one of the most commonly tattooed icons. Then there are characters from comics and graphic novels, which involve bright and highly detailed work. You can’t go wrong with traditional Indian art designs like mandalas and lotus flowers.

“Another hot sub-section of design involves old-school tattoos with a vintage feel. Think tattoos with bold lines and classic imagery such as anchors and pin-up girls. And lastly, micro tattoos that are apt for those who shy away from committing to a large tattoo but yet make an understated statement. They are often placed behind the ear or on the finger, making for a discreet choice.”

If you’re a newbie, read this!

There are a few things for a first-timer to know before getting their first tattoo. Niloy Das of Lizard’s Skin Tattoos, lists some pointers.

He says, “To begin, always do research on what style you would like and go through different artists' work before finalising on one. Make sure you have a consultation before a tattoo session, so the artist can get time to customise the work and not just copy it from somewhere else. I also advise people to be rested enough before a tattoo session as it can be a labour-intensive, time-consuming process.”

Other no-no’s getting a tattoo during pregnancy, being highly diabetic, or being intoxicated before a session.