A marketplace for grey and blue-collared jobs: Nanojobs 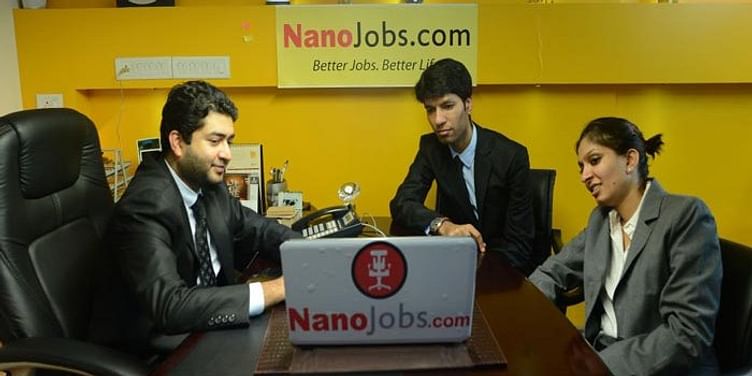 We have several online platforms that help job-seekers find white collar jobs. But when it comes to blue and grey-collared jobs such as plumbing, driving, carpentry and so on, there have been just a handful of startups like Babajob, Jack on the block, etc. The latest entrant into low and mid-level staffing space is Mumbai based Nanojobs. It is a job-cum-employment portal, which bridges the gap between recruiters and job seekers (low and medium level staffing). Currently, the startup has over 1000 categories of job seekers right from drivers to plastic machine moulding operators.

Founded by Anupam Sinhal and Vikash Chowdhury, Nanojobs is currently operational in Maharashtra only. Anupam has a B.Tech degree in Computer Science from P.E.S.I.T, Bangalore, while Vikash did his Bachelor in Computer Science from Queensland University, Australia. Before venturing into entrepreneurship, Anupam worked for IBM and Cognizant and Vikash had been running his maiden entrepreneurial venture - Raj Consultancy.

Motivation behind starting up?

While running his consulting business for white collar jobs, Vikash once bagged a contract for hiring 4,000 drivers in Mumbai. But he found it extremely difficult to find such people using offline manpower consultants. Much to his surprise, none of the online portals had such a database to meet his contractual requirement. “The idea to have a platform for blue and grey collared jobs evolved from our inability to find 4,000 drivers. Right from the beginning, we understood the real pain-point of making a database of plumbers, drivers, carpenters, motor mechanics, etc.," says Vikash.

The founders always wanted to create a solution, which would bring a social impact.

Initial days of Nanojobs and its impact on jobseekers

Initially, almost no senior level executive wanted to be a part of Nanojobs. Recruiting good talent seemed to be a tough task. “However, over a period of time, we have been able to hire good team members, and trained some junior staff to take care of managerial responsibilities,” says Vikash. So far the duo have pooled in around Rs. 2 crore as bootstrapping investment and they hope to achieve break even by the end of next year. Meanwhile, Vikash says that some investors are keen to invest in the idea and the company will raise fund soon.

Ramesh Singh, a 26-year-old immigrant from Bihar is all the praise for Nanojobs. “I saw a hoarding in Lal Bagh (Mumbai) about Nanojobs and gave a missed call on the number given on it (07303440550). Later, a Nanojobs executive called me back and asked for all the details over the phone to create my resume,” says Ramesh. Within 8 days, Ramesh got a call from another Nanojobs associate and was appointed as an office-cum-delivery boy with a Mumbai-based startup in the education space.

At present, most of the manpower-consultants use existing job-portals, which have very little focus on low and medium staffing space. Generally, manpower consultants/startups adopt either word-of-mouth referrals or newspaper advertisements though both these ways have their own shortcomings. “Word-of-mouth is highly non-dependable whereas the newspaper advertisement model is very expensive and the life of an ad is just one day,” says Anupam. The above pain-points prompted the duo to create a portal to enlist only those who are required by every household or organizations. They make them available to prospective employers on-the-fly.

Besides listings, Nanojobs helps job-seekers to build resume over the phone and for non-tech savvy employer, the company offers offline service recruitment wherein it shortlists job-seekers for interview. In terms of traction, Nanojobs has received phenomenal feedback and appreciation. “Individuals who were finding it very difficult to find drivers or maids are now using NanoJobs.com to recruit such people on the go,” says Vikash.

Launched in September 2013, Nanojobs claims to have done over Rs. 25 lakhs of business so far. “Our USP lies in the database and we follow multi-tier verification mechanism before listing freelancers on the website,” says Vikash.

Challenges and how Nanojobs tackled them?

The startup depends highly on freelancers who work on the field to collect data from the job-seekers. As of now, more than 150 freelancers are working on it and the founders expect the number will see multiple-fold growth in the next two quarters. Building a database of job seekers in this segment proved to be the biggest challenge for Nanojobs. “Since we cannot expect them to come online, we need to go to them to get the application form filled. We have used various media to reach out to such job-seekers who are otherwise not available anywhere,” says Vikash. The startup had used smart advertising that enables jobseekers to register with just a missed call to 07303440550, which is then returned. No registration fee is charged.

The company would soon be expanding to other cities, including Bangalore, Delhi, Kolkata, Ahmedabad, Pune, and Hyderabad. “The plan is to build a database of at least 5 million job-seekers in the next 18 months,” signs off Vikash.