Experimenting with chai to build an INR 100 crore+ business: the Chaayos story 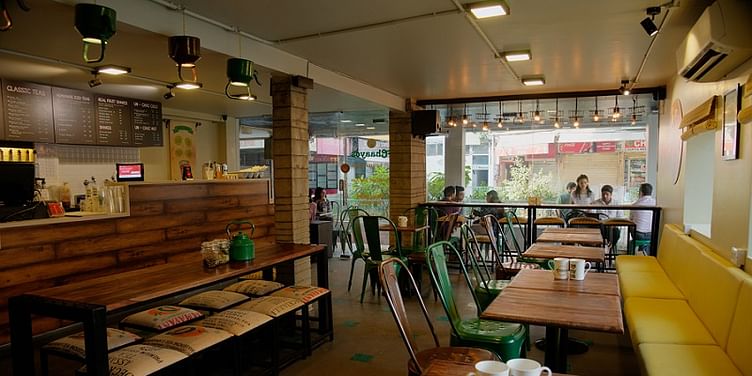 “My mother taught me how to make tea when I was very young. And ever since, I have always been particular about my cup of chai,” says Nitin Saluja, Founder of Chaayos, an NCR based chain of tea outlets. Their tagline reads ‘Experimenting with chai’ and it reflects when you look at their menu where you’ll find teas like ‘aam papad chai’ or the rose cardamom chai. Launched in November 2012, Chaayos currently has eight outlets in NCR and is now planning to expand to Mumbai and Bangalore.

Chai was always a crucial part of Nitin’s life but he had never thought of opening a chai outlet, especially not after getting through IIT-Bombay! But life always has interesting cards to deal out; one only needs to be open to possibilities.

In the final years of college back in 2006, Nitin was pretty sure that he didn’t want to get into a dull job routine. He got along with a few friends and started a robotics company, Think Labs. Incubated at SINE-IIT Bombay, the company has morphed into a dedicated provider of hands-on science and technology education in India and is currently valued at over $10 million. Moving on from the operations at Think Labs, Nitin moved to Opera Solutions for a five-year stint before the entrepreneurial bug bit again.

“Somehow chai was always there at the back of my mind. And when I asked myself if there is a place in India where I can find ‘meri wali chai’, the answer was no,” says Nitin. This is when he decided to go ahead with this seemingly crazy idea of starting an outlet of chai. The idea was to have something like a Starbucks for India and that of course has to deal with ‘chai’.

While thinking of this, Nitin was introduced to Raghav Verma, an IIT Delhi graduate of batch 2010 by a common friend and the two hit it off straight away. Nitin took care of the product development, settling the supply chain, setting up processes while Raghav took care of marketing and business development.

Settling for the name Chaayos, the duo opened their first outlet, got the unit economics right and charted a scaling up plan. Over the last two and a half years, they have opened seven more outlets with a core team of eight people and a staff of 50 as the ground staff.

“The challenge which most people face is to maintain quality while scaling up. This is one area which we think we’ve got covered and gives us an edge. Each of our cups can give that ‘meri wali chai’ feeling,” says Nitin. Their highest grossing outlet turned in an annual revenue of INR 1 crore. The target market for Chaayos is the upcoming middle class that has money but is equally conscious of the value they get.

Great. All this sounds good but Chaayos has also been able to raise an angel round from the likes of Zishaan Hayath. How is chai a venture-backed business? Don’t investors look for a 100x return? Nitin gives us Zishaan’s perspective to this:

The plan for Chaayos is to setup 60 more outlets in 2015 and scale up rapidly. Apart from outlets, they already have tie ups with corporate for deliveries. Their app is coming out soon which will be opening a B2C subscription channel as well.

Is Chaayos alone in the race? Ofcourse not. Chai Point is perhaps the largest player in the area which already has 60+ stores. There are many other chains as well like Infinitea, Chai Thela, Chaipatty, etc. but most of them haven’t been able to scale up quickly enough (and everyone doesn’t have to). Nitin and team are currently focusing on getting the deliveries kick off with their app launch along with a fund raising effort to fuel growth.