Techies by profession, entrepreneurs by vocation: The Techie Brain Films team wants to have it all 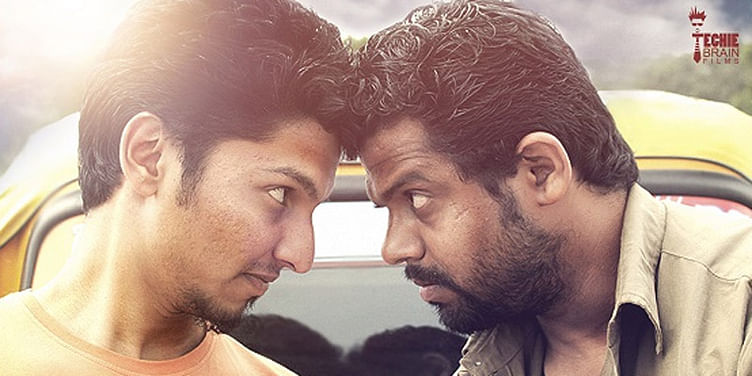 The general idea is that there has to be a clear demarcation between an entrepreneur’s and a non- entrepreneur’s life. That our devotion is only deserved by those who have given up the requisites- corporate job, large pay check, sleep, etc.-, to follow through with a dream. Even if the expected rewards did not materialise, and the visions of heading a successful startup fell through, we still admire those ilk of entrepreneurs for their courage in facing up to failure.

Then there are those who have built a life for themselves within the conundrum of nine to five jobs and fixed pay checks. Most of us yearn to contribute to the world positively in some capacity or another, but don’t have the stamina or the inclination to uproot a perfectly fine existence in order to chase wild dreams into the sunset. Rathesh Krishnan belongs to that breed of creative for whom entrepreneurship is a weekend activity- but an important one nevertheless. On weekdays he and his colleagues are regular employees. Come weekend they are a passionate motley crew of writers, directors, actors, musicians and technicians who are creating short films on a variety of themes and subjects. They do this under the umbrella organization of the aptly named, ‘Techie Brain Films.’ “Film making is our passion! Techie Brain Films is the brainchild of a group of techies with a perpetual affinity for film making. Our main aim is very simple - to make good films that can inspire others. We have created 9 short films and hopefully our 10th project will be a commercial feature film,” says TBF head Rathesh Krishnan.

For Rathesh, the impetus to launch TBF was discovering that his colleagues shared his passions. “After joining my present company, EDC Creative Technology Solutions, I discovered a group of like-minded young and ambitious guys, who were a part of our creative team. We gelled really well as creative film making was the main connecting factor here. All had a lot of innovative ideas and wanted to be different from other regular IT professionals. We felt that all this talent should be brought forward and showcased at least before our friends and family. That is when we decided to start a platform for this purpose and to get our actions organised. Few other likeminded IT friends outside EDC also came in after our first work,” he says.

Rathesh was widely involved in drama and film extracurricular activities in school and college days and had won numerous accolades for the same. But life didn’t go as planned. “After studies, because of various personal commitments, I didn’t have the luxury to go knocking on the doors of other directors and film makers. So I had to leave that dream and took up an IT professional’s career. I am a B.E graduate in Computer Science & Engineering,” he laments.

“Professionally my life was going really good, but somewhere I felt that I was missing something. Now, everything has changed!” he exudes.

In his day job, Rathesh is a corporate liaison, heading a business development team for EDC’s three locations- India, Qatar & UK. “My role’s main focus is to expand our client base by building new contacts & relationships,” he clarifies. But on weekends, it is another story. “We have decided not to do any kind of TBF’s works during our office time. All planning, brainstorming and execution are done in the weekends and few urgent and important discussions happen during lunch breaks as well. There has been days in which we have not slept for more than three days in a stretch. But instead of exhausted, we felt exhilarated,” he smiles.

The TBF team really did not expect funding from any external sources. They pooled money together to finance their first short film and intended to do the same for all their subsequent projects. But things took a different turn after that first film became wildly successful. “We expected only 1000 views but it exceeded 71K views. We started getting producers. Now all our projects are funded by producers. Many of them are friends and well-wishers from different parts of the world,” grins Rathesh.

Though the money has been welcome, Rathesh is quick to insist that it was never central to the work they do at TBF. “From the beginning, money was not at all in the picture. We formed TBF to exhibit our talent to the outside world and to get noticed by the Film Industry professionals.

For instance when we got the first instalment of YouTube revenue for Thank You Thalaiva, I had sent half of that amount to Superstar Rajnikanth by money order (an amount of one thousand rupees). Not because he wants money from us, but out of our respect for him we felt like sharing that revenue with him. That may be too small an amount but again that may be a very unique thing to do mainly because nowadays everyone is trying to get some money from the Superstar. We did the other way round.

Thank you Thalaiva was done with a very small budget and it has generated more than the production cost from YouTube. In the long run all our projects are sure to generate revenue,” he points out.

And the benefits have transcended far beyond finances. It has created invaluable team rapport. “Since we are doing something unique and different during the weekends – we are able to be fully charged throughout the day while doing our regular work. We were able to understand each and every team member’s strengths and style and their specialisation areas, mainly because of this connect. Moreover it helps us to be very creative in every aspects of our regular work,” says a happy Rathesh.

Despite all the appreciation coming their way, things have not been easy. “The lack of state-of-the-art facilities and well-equipped studio create serious barriers in our quest to produce quality work. Also, we are forced to rent out a lot of shooting equipment, dubbing studio rates, etc. to match up to the expensive production costs,” he says.

Rathesh is adamant that the best eclipses the worst.

Being a part of TBF has enriched my life in so many ways that I don’t let the negatives- the overwork, exhaustion, lack of enough funds or time, etc. - bother me. The best part is getting recognised by people from the film industry. Our first work ‘Thank You Thalaiva’ (a fan tribute to Rajnikanth) was selected for the Bangalore International Short Film Festival. ‘Back to School’ won the Special Jury Award for Best Indian Short Film at the Indian Short Film Festival held last month.

Launching and running TBF has been an eye opening experience for Rathesh and team. He says, “Every project was a new learning for us. We didn’t have any professional film making experience before and had the luxury of experimenting in almost all areas,” he says. For the foreseeable future the TBF team is busy with a variety of plum projects. “Johny Walker is our latest work for which the post production work is going on. It has been directed by Anurag and I play the main protagonist. The film tells the story of an alcoholic. Three other films are in the pre-production stage. One is about children’s empowerment. Another one will be highlighting mainstream Indian society’s bias against Islam. The third is a murder mystery,” relays Rathesh.

For someone balancing a double life, Rathesh has insightful advice to share: “It is never too late to go after your dreams. Don’t give up, it’s as simple as that.”

You can check out more of TBF's work here