Is the comic ecosystem the next big thing in India? 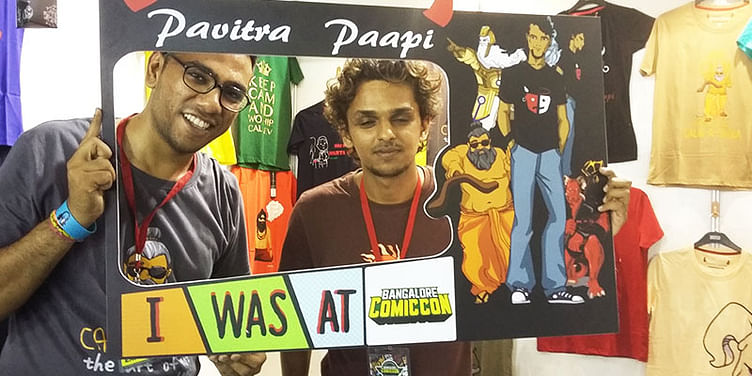 “Comic books have the power to transfer you to a fantasy world that is different from the mundane one you are living in, that feeling gives you faith and power,” said a DC Comics enthusiast at the 2015 ComicCon session held in Bangalore this month. For three days, the White Orchid convention centre at Nagavara had become a different universe peopled with comic aficionados, gamers, artists, and authors.

The three-day event had not only biggies like Amar Chitra Katha, Marvel Comics, and DC Comics participating, but also saw Graphic India make its comic con debut with the launch of their graphic novels. Mysore Lakshman Amarnath and Saumin Suresh Patel’s Kamotsava introduced snappy tittles like Pavitra Paapi and Leo and Capri. “Indian has a vast pool of artists and writers, and over the past few years, it is great to see them on this platform as well,” says Jatin Varma, the organiser of ComicCon India. But does this in any way indicate that the comic industry is the next big thing in startups?

“What is driving the interest of the general population towards comics are the movies that are being released internationally. Many come to buy movie merchandise, whether it is the t-shirts or action figures. And they also discover Indian graphic novels and writers,” says Jatin.

Giving a perspective on the growth of the Indian comic industry, Jatin says that whereas 2011, had only about 10 comics, there are already 20 releases.” Several companies use comics as a medium of marketing and advertising. Anything that puts the focus on comic books just helps the industry and its artists grow says Jatin.

However, this doesn’t even come close to what a DC or Marvel have. The international giants beat the nascent Indian segment with sheer volume and numbers. But today Indian publishers are working towards increasing their cataloguing and making bigger stalls. “International players beat us by the sheer volume and and variety they have. But we are a growing industry,” says Jatin.

Elaborating further on the growth of the Indian comic book market Sharad says: “We are seeing marco trends happening simultaneously in India, which is giving a push to the comic culture here. A large segment of the audience is below 25, and is digitally connected.Ten years ago, fans were scattered all over, but now they can together, and build a flame from a spark. It is about building a community.”

Sharath believes that what the animation boom and Star Wars did for ComicCon in the US, animation and Indian graphic novels will do for the Indian scene.

While we owe the increasing awareness and growth of the Indian comic book industry to theinternational film franchises or the digital age, the themes of most of the Indian graphic novels are in Indian mythology. Whether it is Aayumi Productions Kaal, Graphic India’s Devi, or the more recent Kamotsava by Saumin Suresh Patel, all have mythical themes.

“Indian art is beautiful, Kamotsava has been inspired by temple architecture and erotica, which is a very Indian concept, and I believe we need to play with our strengths,” says Saumin Suresh Patel. However, the use of mythology in the world of graphic novels and comic culture isn’t a new one. Mythology has always inspired fantasy writers, be it is Thor, Hercules, or Tolkien’s elves.

“India is a store house of stories; we grew up reading and listening to some truly beautiful and amazing stories. The western world of mythology simply cannot compete with what we have in terms of themes and style. And this is an added advantage we are trying to leverage,” adds Sharad.

However, there isn’t a character like a Harry Potter, Batman, or Spiderman in India that anyone across the world can connect to. “That is true, but we believe that the Indian characters can be equally strong and pull in a global audience, it is just about using the right levers,” We also need to reinvent Indian mythical stories he in modern context,” says Sharad.

Adding to this point, a representative of Aayumi productions says: “There already is so much happening in our stories; there is action, drama and sci-fi. It is just about using those as a base and leveraging it into something bigger.”

“The art is simply fantastic, there are some stories that truly look amazing and great, we might look at buying some of these,” two French nationals said, after the screening of Kaal by Aayumi Productions. “The 18 days of Mahabharata, sure looks fascinating,” said another European, after looking at some of the posters by Graphic India.

Initially, it was Korea, China, and Japan leading the charge with their characters, but many artists and publications believe that India can emerge as a challenger.

“I have received great reactions from foreigners when they look at our Mahabharata, it is an epic story and if you leverage that with a graphic advantage you have a winner,”says Sharad.

While there were several comic artists and upcoming writers, the ComicCon this year was filled with merchandise by LazyNinja, Bewakoof, Hysteria, ElleTee, Chokadi, and many others. “While I would like it to be only about the books, there is this growing demand for merchandise as well,” says Jatin.

Another publisher, who had got Game of Thrones t-shirts and other merchandise along with his books, says: “People look for both; as publishers we might feel partial towards the books, but we cannot ignore the fact that people want both, and many just want the merchandise.”

“I have grown up reading these comics, and while I love the new Indian comics as well, I love anything that can associate me with my favourite character. So along with the books, if I get action figures, mugs, t-shirts, masks, and key chains as well, I would simply lap up the deal,” says a 26-year-old graphic books enthusiast from Delhi.

“It is about the whole eco-system. If people buy a t-shirt along with the book, it is equally encouraging to the artist and the writer. On the whole, merchandise just happens to be a part of the industry and we simply cannot ignore it,” says Sharad.

There were several artists and writers who were a part of this year’s ComicCon, “Publications like Bflat give artists and writers a platform to showcase their work and even make money out of it,” says a representative at the Bflat Stall. This year even saw the launch of a book by a 12-year-old writer from Hyderabad. “I have been writing since I was in the first grade; it’s nice to see publishers who want to publish my book. While many told me I was too young, there were few who were willing to bet on me and that’s why I am here today,” says the young writer.

With Game of Thrones Daniel Portman and Natalia Tena at this year’s ComicCon, several fans went rushing in to catch a glimpse of the actors. The actors never anticipated this kind of volume and fan following and the two were impressed with the artists and writers of the country. “I am completely overwhelmed and the thought that there is a huge fan following and comic culture, all the way here is completely heart-warming,” says Natalia.

While the number of people who attended the ComicCon this year was lesser compared to last year, the buzz isn’t dead. With the growing number of Indian writers, artists, and publications in the scene the market space is poised to grow. “At present, there is no pie; we all are here with just one goal, building a comic culture and ecosystem. We can think of cutting the pie after it has been made,” says Sharad.

“There are many people who have come in and enquired about our books as well, we see them carrying Marvel and DC comics, and yet they pick our books. It is very encouraging” said a graphic artist based out of Bangalore.

“Bangalore is a very open market, most artists and writers know that if something sells and works here, it will work across the country. And while I cannot say that the Indian graphic novels are doing brilliantly well, but they definitely are picking up,” says Jatin.

Many believe feel that this year’s crowd was serious. “There are people here who know things and have probably been reading comics and fantasy novels for ages now, they know their stuff and if they like your work it’s great,” said a young graphic designer from Ahmedabad.

Mysore Lakshman Amarnath the creator of Leo and Capri says: “Comics are picking up like never before now, initially it was restricted to children, now people of all age groups read comic books. There is a level of sophistication that is needed. I wanted to bring the beauty of the 2D comics I grew up reading, so I came up with Leo and Capri, and it’s nice to see positive response around it.”

“The graphic designers have the advantage of the digital age these days. They can compare work and see several different artists and learn, unlike in my time. It is great to see the growth of the Indian comic industry and market. The level is simply brilliant,” concludes Aabid Surti of Bahadur fame.