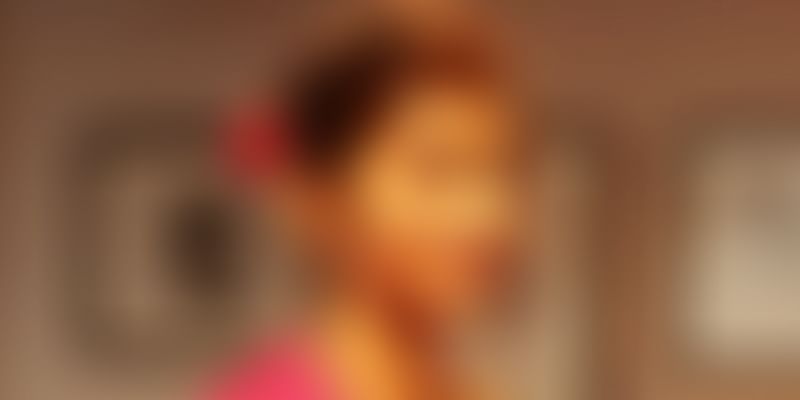 On a recent visit to Bhopal‘s Bharat Bhavan with poets and fellow authors of the city, I spotted a young girl standing outside the complex’ art gallery. Brimming with confidence, she invited us to the exhibition which read – ‘Dilemma of the speechless, by Divya Patwa.’

Curious, we went in and strolled around the room witnessing some interesting etching artwork, depicting animals in different forms and shapes, often clad in surreal and absurd overtones. Etched on metal, or engraved in wood, the artwork gave away a three-dimensional effect. The maturity and depth of the artwork was quite evident. We wanted to meet the artist and discuss her style, and hence asked the young girl who the artist was.

You might have guessed by now that the young girl was the artist herself. Twenty-six-year-old Divya Patwa hails from Ratlam, Madhya Pradesh. She had a simple childhood with a warm family and 50 odd cousins to spend holidays with. She told us about her initial interest in paintings, pottery and clay craft, and how she chose to pursue her interests as she grew up. She was the first girl in her family and friends group to pursue arts, thereby sending them in a state of shock.

The beginning for an artist is always the most difficult part. Almost everyone is naïve towards art, no one has any idea what it is that you are doing. People either think you have gone mad or advise you on your work which they don’t understand at all, and how irritating is that!

Determined to pursue her interest, Divya did her Bachelor’s degree in painting from Maharaja Sayajirao University of Baroda. She opted for Print Making as an addition subject during the course and having found interest in the area, decided to take up the same for her Masters from the same institute. Advised by her teachers, she gradually started with wood engraving which was different from standard wood work because of the wood involved and the skills required. Some of her college day’s wood engravings would make it to exhibitions across the world – of course she didn’t know it back then.I naturally gravitated towards etching. My etchings were different from the rest because I use tusche ink which is basically meant for lithography, but I work on zinc plates, which suit my work the best.

Trying different styles and not falling for the conventional methods, Divya gradually developed her own style of embossing within the medium of print making, which was very unique. Her artwork started to appear three dimensional on a two dimensional surface.After finishing her Master’s degree, she was selected by her college for an exchange program with De Montfort University, Leicester. After spending two months in England, with renewed passion to pursue etching and wood engraving as her media of expression, she has joined the small community of art entrepreneurs from India, actively pursuing avant-garde and surreal styles in a society where public art is more or less confined to realistic or figurative forms.

When we asked Divya about her fascination with animals as a subject of expression through art, she told us about how she has been an observer and lover of animals since her childhood. Amidst the hustle and bustle of daily activities, she always finds time to peep into their lives and find solace in their world. This has helped her develop her visual style.I try to find a bridge between animals and humans. Like humans they also understand things; they also have feelings, they also have emotions, but their way of expressing things is different from ours. They have deep bond among themselves, and with nature. It is due to this observation that an unseen force dominating animals has started to get revealed in my work. I try to bring out the element of their sufferings, and protest on their behalf.

Her greatest driving force is the support of her parents and teachers. When asked about her future projects, she told us about a residency called ‘Unwinding’ which takes place in Uttarayan Art Studios in Jaspur, Baroda, every year during the summer. Young artists from across the country bring their skills together to collaborate and share their experiences. Divya is currently working on the programme’s coordination, while searching for new inspirations.

Elliot had once said that genuine poetry can communicate before it is understood. As our small group of poets followed Divya into her world of etching and wood engraving, we realized that the same applies to every form of art.

I still remember the moment we parted, hopeful deep down somewhere that I will come across the name of Divya Patwa more often, when the present and future of art scene in India will be discussed.

‘I had a remarkably unambitious childhood,’ Abhishek Majumdar of the Indian Ensemble theatre group

Dastangoi – the ancient art of Urdu storytelling, on the road to revival in India