With 2.1 lakh registered users and 1.37 Cr questions solved, Testbook is targeting both web and mobile platforms 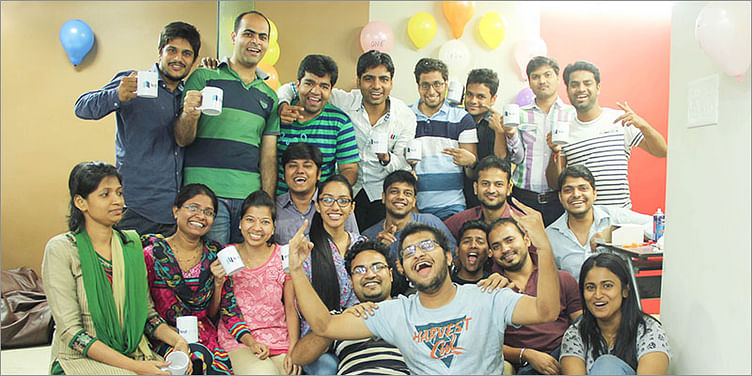 With the second highest population in the world, India is among the biggest markets for education enterprises and startups. With cut-throat competition at all levels, from school to post graduation in different competitive exams, there are many established brands and upcoming startups which are trying to solve the problems for students in achieving their academic goals.

In recent times, education services have gone online and reached a wider audience. While end-to-end educational services such as video lectures, virtual training and online tests have been available on desktop sites for quite sometime, they are now gaining traction in the mobile app ecosystem as well.

Testbook was started in January 2014 by IIT Bombay and Delhi alumni with the short term goal of helping students crack the GATE exam through mock and live tests. Their long-term vision was to create a platform for all the major exams in the country.

Within a month of their launch in January 2014, Testbook was able to reach 13,000 students through their platform. The core team consists of Ashutosh Kumar, Narendra Agrawal, Manoj Munna and Praveen Agrawal, IIT Bombay alumni, and Yadvendar Champawat and Abhishek Sagar, IIT Delhi alumni.

Ashutosh functions as the CEO and has been in the education sector for the last seven years and had founded another education startup before Testbook. Narendra is the CMO and had earlier founded a couple of startups in the education and mobile sector. Yadvendar is the technology head at Testbook and had previously worked at Oracle.

Abhishek heads their Android development section and has prior work experience at Adobe. Manoj had earlier co-founded a merchandise startup and is now the product head at Testbook. Praveen who had previously worked at Deloitte heads their content team.

In October 2014, they expanded their services to other verticals and exams such as CAT, SBI PO, SBI CLERK, and IBPS PO, and have included GK, current affairs, and aptitude, on their platform and reached 55,000 registered users. At this stage, Testbook raised 1.5 crores from LetsVenture and Ah Ventures, along with a few external angel investors. The round was led by Utsav Somani and MD of Carlyle Group, Shankar Narayanan along with other investment bankers, education professionals, mobile experts and entrepreneurs.

Testbook provides free tailored mock tests for users, with upgradable plans for their live tests for different exams.. Through the platform, users can solve questions, check answers and explanations, and get access to analytics to track their performance and improve on their weak points. They also provide subject and chapter-wise modules, bookmarking ability and exam notification updates from IBPS.

In late June 2015, they crossed another milestone of 2.1 lakh registered users. In addition, 1.37 crore questions have been answered on their platform so far, which is about 65 questions per user. They currently have a team size of 60, with sub teams focussing on content, mobile, and web development.

Testbook has mainly focussed on marketing their product through social media channels, word of mouth marketing through campus ambassadors at different colleges, and email newsletters. They have no plans to focus on offline marketing at this stage. But they have a sales team which actively on-boards small to medium sized institutes on their platform enabling them to provide online tests to students.

Talking about how they achieved 2.1 lakh users in 18 months, Ashutosh says,

We have majorly focused on inbound marketing by producing quality content on our blog which brings lot of visibility among students towards our product. We have created different landing pages for each exam so that students know exactly what he or she is signing up for, which helped us increase our conversion ratios by 3x.

The team has noticed banking exams, conducted through the year, are most in demand on their platform, followed by GATE, placement aptitude tests, general knowledge, and current affairs. Ashutosh found that the demand reflects the real world where almost 70 to 80 lakh Indians give banking exams annually and almost 10 lakh students give GATE annually.

They have also noticed that a large proportion of the banking exam aspirants are from tier 2 and tier 3 cities and they often face the problem of non-reliable internet connectivity and many do not have access to computers. Ashutosh adds, “A large percentage of these users have access to low or medium end Android smartphones. So we thought why not provide Testbook to them through a mobile app!”Mobile app strategy

Their product had been solely web based and in June this year, they launched their Android app to cater to a wider audience. The app currently has over 10,000 downloads and is among the top five new free apps related to education.

As they have reached a user base of 2.1 lakh registered users on their desktop site, now they will shift their main focus towards the mobile app and are planning to provide a uniform experience across both platforms.Currently in its first iteration, mobile app users can only access the ‘practice mode’ for a few categories. The team plans to add more categories and tests in the future. Ashutosh adds:

Gamification is one of the key aspects of the app. For every question the user answers, they get XP points, which they can use to access our paid features and tests. Our app also works well on intermittent internet connections and users can also complete their tests offline.

The Testbook team has also focussed on providing an appealing user interface and experience to the users. For every question a user answers correctly, the ball denoting the question number, turns green and it cracks and turns red in case of incorrect answers.

They also reward users who practice questions on a regular basis through their ‘Streaks’. This feature is similar to the streak concept in some of the fitness and exercise apps, which encourage users to complete their workouts regularly. They are also working on providing an adaptive test platform on their mobile and web apps.Competition

Testbook competes with Toppr, which raised INR 65 crores earlier in May 2015, MockBank, which focusses on the different banking exams, other noteworthy startups in the educational sector, including Embibe, 100Marks, Examify, Mera Test Bazaar, and Oliveboard, etc.

Testbook will update their app with GATE and campus placement practice content in the next phase and plans to include more social and sharing features in the future iterations. They are also working on the iOS and Windows version of their apps to be launched in the coming months.

They are currently in talks with leading VC funds and aim to close their Series A round in the next few weeks.