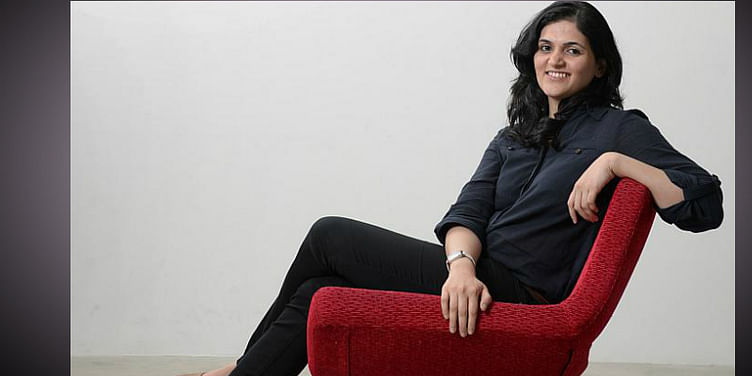 “In my third year of college I made an automatic iron for shirts. That’s when I realised I can really be an inventor who changes people’s lives.”

Pranoti Nagarkar, believes in ‘simplification’. Simplifying is her personal philosophy, and it is the guiding principle for her team that’s making Rotimatic happen.

Rotimatic, a product of Zimplistic, is the first robot that makes healthy, homemade rotis and wraps with just one touch. As a health-conscious new wife, Pranoti wanted to cook healthy meals at home. She invented Rotimatic when she herself faced issues with managing time in a hectic schedule.

Zimplistic completed a Series B investment round of $11.5 million in July 2015.

Growing up in a family with four generations of engineers, Pranoti had always dreamed of becoming an inventor. Talking about her parents, she says, “Both my parents have been entrepreneurs in their own ways. My mother is a very dynamic and intelligent woman and a painter. She started her own interior design consultancy, wore many hats, learned programming to keep up with the latest in the world, and currently is living her passion as a mathematics teacher. My father is also a very grounded, extremely logical and practical guy. He started his career in machine design. In his 50s, he decided to work for himself by starting a point-of-sale turnkey solutions company.”

Pranoti says she is the perfect mix of both her parents whose traits have manifested in her: her mom’s rebellious, creative and thoughtful nature and her father’s logical, practical and humble thinking. Born and brought up in Pune, Pranoti came to Singapore on Singapore Airlines’ Youth Scholarship to do her A-Levels at National Junior College. Owing to her love for engineering and being hands on, she pursued a degree in mechanical engineering and went into Product Design at National University of Singapore. As part of the university exchange programme, she studied at Berkeley.

After kicking off her career with a renowned consumer brand, taking products from concept to final mass manufactured design, Pranoti wanted to tackle a problem she felt strongly about: helping families eat healthy.

“That’s why in 2008 I co-founded Zimplistic, investing all my personal savings, time and relationships into bringing our vision of the world’s first fully-automated roti machine, Rotimatic, to life.”

Over the past seven years, Pranoti and her team have worked relentlessly, won Start-Up@Singapore, were placed third in the Intel Berkeley Technology Entrepreneurship Challenge.

Pranoti has worked for two years at a product design consultancy to learn the development process. All the while, she had a list of ideas she wanted to work on. Being a health-conscious person, and after she got married, she decided to solve the universal problem of eating healthy food despite busy lives.

Rotimatic can produce up to 20 fresh rotis in one go, one roti per minute, with options for oil, thickness and roast levels.

“Launching the pre-order campaign in 2014 with thousands of orders coming in was exciting yet at times overwhelming”, Pranoti recalls. The team is expanding quickly, now 35 and growing, they are looking

forward to the next phase of bringing the machine to the first round of pre-order customers. “Finding the right people to join the team is, as the founder, my biggest focus. I believe building a strong culture of innovation with a passion to do good work while bringing a family spirit to the space is important to create a world-first product like Rotimatic,” Pranoti explains.The primary customer base currently is NRIs, especially Indians living in the USA. Pranoti explains, “Roti is such a staple in their diet, yet making it is a true skill, time consuming and even messy, so they miss having it fresh daily.”

She adds, “Looking at the larger potential of Rotimatic, because flatbreads are a part of diets worldwide, from tortillas in South America to Injera in Ethiopia and Piadina in Italy, Rotimatic will transform the way millions of families globally eat.”

Pranoti admits that it is unusual for a woman to build a hardware product. She has been stereotyped, in that people didn’t believe she was the Chief Technology Officer and engineering architect in the company. They’d think she was the sales or marketing person.

“So I rode a motorbike to meetings to signal that I was different,” she adds.

It was also a challenge when she was expecting. She says, “I hid my pregnancy for as long as I could because I didn’t want any special preference.” However, through her experience, she learned that what a women brings to the table is very unique. “We don’t have to let go of the feminine qualities. It’s more

about attaining a fine balance between masculine and feminine qualities,” advises Pranoti. The attitude of giving 100 per cent to everything made it possible for her to not compromise one for another.Her Co-founder, husband Rishi Israni, has been a part of the journey from the very beginning. “In the early years when I was all alone he’d brainstorm with me as I was building the first prototypes of the product. Then, as software expertise became a critical part of the product, he joined full-time to help me build the company,” Pranoti recalls. Rishi had had a long-time vision to start a restaurant, and they see eye-to-eye on the importance of healthy eating in the family.

On the more challenging side, when you work and live together, you have no boundaries. The solution Pranoti proposes is to clearly define what each person’s domain is so each works on their strength. She says, “When we face challenges, both of us like to internalise first, which at times leads to mis-communication. Keeping the communication channel open at all times makes all the difference.”

But does the inventor use her invention? Pranoti exclaims, “Yes, we have Rotimatic on our kitchen counter! I invented the machine to solve my own problem of eating healthily while being busy. Now with a husband, a young son and a business to run, Rotimatic is an essential piece of our daily meals making sure we eat well as a family.”