Story of Rifleman Jaswant Singh Rawat, whose valour impressed even the Chinese commanders 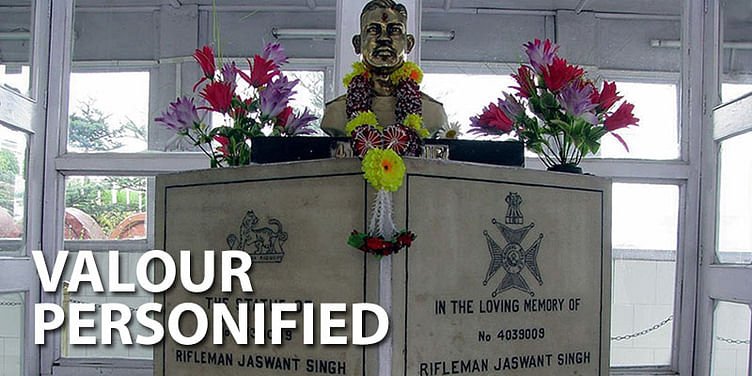 Army day is observed on January 15 every year, to mark the anniversary of Lieutenant General K.M. Carriappa taking over as the first Commander-in-Chief of the Indian Army in 1949, from the last British officer. The Indian army originated from the East India Army, which then later became British India Army. Known around the world for its bravery, our Army has fought many a battle, and was the largest volunteer army in World War II.

Defence institutions ride on tales of bravery from their past, but, most often, it is the historical acts of individual officers that plant the seeds of pride and inspiration in young soldiers for posterity.

So, on Army Day, it is only fitting to remind our readers of the story of Rifleman Jaswant Singh Rawat, MVC. a soldier whose valour was celebrated even by his enemies.

Rifleman Jaswant Singh is considered the hero of Sino-India Warin 1962. According to a local legend,he single-handedly fought the Chinese army for three days. It was the last phase of the war in November 1962, and due to a lack of resources, his company was asked to fall back. But, Jaswant Singh remained at his post. With the help of two local girls, Sela and Nura, Jaswant Singh set up weapons at three different spots and fired them non-stop for three days. Thinking a big contingent was firing at them, the Chinese Army stayed put.

As the time passed, the Chinese Army grew frustrated, as they knew no way to counter the purported attack of the Indian Army. They finally caught the man who was providing food to Jaswant and the two girls and interrogated him. The man spilled the beans. The Chinese then surrounded Jaswant Singh from all sides. Nura was captured and Sela died in a grenade burst. Jaswant Singh, realising he was about to be captured, shot himself.

The Chinese forces cutoff Jaswant Singh's head and took it back to China as a war souvenir. After the war was over, the commander of the Chinese forces, impressed by the late Jaswant Singh's show of bravery, returned his head along with a brass bust made of the soldier. It is now installed at the site of the battle. He was posthumously awarded Maha Vir Chakra for his bravery. Jaswant Singh's display of valour, and his love for his nation has proved to be a great source of inspiration to Indian soldiers since.

Today, we also revisit a conversation we had with a few army officers and aspirants awhile ago: