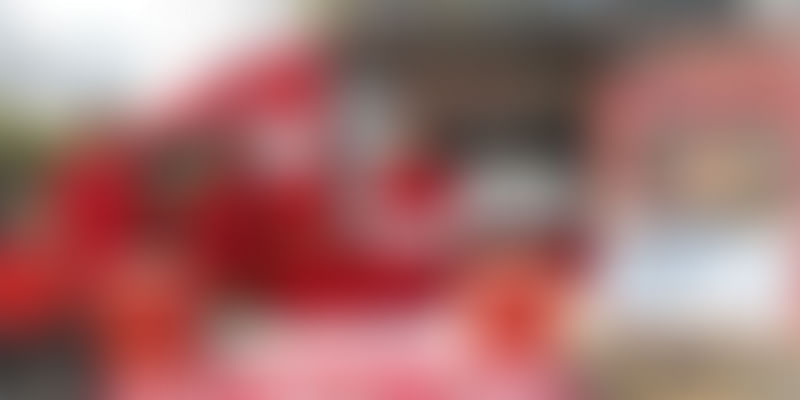 Have you not always wanted the food that you order online to be still piping hot when it reaches you? If you are a foodie, you would know that the true essence of the meal lies in eating it fresh, hot and right off the chef’s table! Gurgaon-based Rocketchefs, is a 'food truck on call,' which promises to deliver food at customers' doorstep through mobile food bikes, vans and food pods.

Rocketchefs was started in October 2015 with a seed capital of Rs 70 lakh. It offers stone-oven thin crust pizzas and gourmet sandwiches which are prepared inside a van by the startup's chefs. Customers can place orders through geo-location-based app or via call and get food delivered to their doorstep. The app enables them to look up the food van closest to their vicinity.

I have always been mindful of the smallest of elements that go into making any experience a rich one, and will definitely pull all stops when it comes to my first love for food.

Having been associated for two decades with big names in the industry such as The Oberoi Hotels, The Manor, Citrus Hotels, Westin (Hyderabad), Marriott (Bengaluru), HVS International and Reliance Petroleum, Ram (50) has always dreamt of rising above present standards to provide quality service and experience. He has completed graduation from the Institute of Hotel Management, Pusa, New Delhi and post-graduation from Oberoi School of Hotel Management.

Currently, Rocketchefs has four professional chefs and three vehicles in Gurgaon. It has a specially designed oven in all its vans to heat up the food quickly. It delivers 60 to 70 pizzas on a daily basis, with an average ticket size of Rs 500, maintaining a margin of 60 per cent.

Ramnidhi says the main investment was the pizza van, which is between Rs six and seven lakh, including customisation and equipment. The breakeven sale for each pizza van is Rs 3,500 per day, he adds. They have also developed a pizza kiosk that costs Rs two lakh. At present, the startup has a team of 16 employees.

Rocketchefs is growing at a rate of 40 per cent month on month. In two to three years, the startup aims to have around 250 pizza vans and kiosks across Gurgaon, Delhi, Mumbai, Bengaluru and Chennai, and a revenue of Rs. 10 to 12 crore.

The history of the food truck can be traced back to the 1800s, when Texas-based Chuckwagon made its mark as a precursor to the American food truck. Eventually, the trend became popular across Australia, Belgium, Canada, France and Mexico with the invention of gourmet food truck.

In India, the concept is yet to gain the significant mindshare of customers. However, in the recent past, it has started making inroads in cities like Bengaluru, which has Gypsy Kitchen and Spitfire Bbq whipping up delicacies out of a truck, Delhi, Chennai, Mumbai, Hyderabad and some Tier II cities, given the increasing preference to eat out.

According to IBEF, the Indian gourmet food market is currently valued at $ 1.3 billion and is growing at a CAGR of 20 per cent. The organised food business in India is $48 billion, of which food delivery is valued at $15 billion.

But is food tech industry really growing? Year 2015 witnessed a lot of drama in this space, starting from dip in funding, employee layoff and some startups even shutting down operations.

The foodtech space has scooped up a total fund of $74 million last April alone, with seven deals. In August, it had dipped to $19 million with a total of five deals, and September saw just two deals.

Anand Lunia, Founder, IndiaQuotient, says, “If you look at it, every VC till date has invested in some form or the other in the space. And for many of them it hasn’t gone well.”

RocketChef’s model is based on India’s legendary street food scene and can be expected to sit well with the millenials.

Ramnidhi says, “Rocketchefs is a progressive evolution from food delivery to food being cooked at your doorstep. We are not striving to simply create a brand, but to build an ecosystem for pizza creation, delivery and experience.”