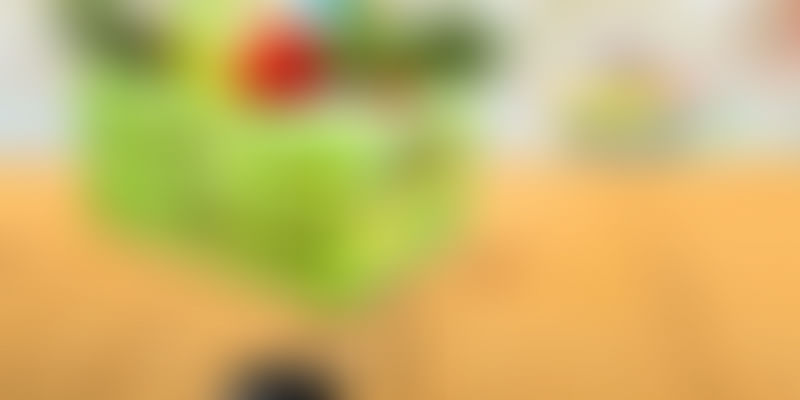 People have different sources of inspiration behind wanting to start a business. For Sunil Suri, the cause was more noble following great personal loss. A software engineer, his life changed forever when he lost his mother to breast and stomach cancer and his father to diabetes. Food and health became critical components of his life when he realised that had his father’s diet been regularly guided and monitored, he could’ve lived longer.

Out of passion and as an homage to his father, Sunil decided to build an application named Swadesh Menu Planner. It was a platform where users could upload their diet plans and dieticians could check and ratify them.He developed the application in two months’ time, but unfortunately there were no takers for this free application for the next six months.

When things went from bad to worse, he decided to pivot. However, food and health remained his core passion. Now, instead of just telling users to use a menu planner, he sells them fruit and vegetables and once they are onboard, he offers the menu planner free of cost.

He knew that selling fruits and vegetable was an overworked idea, and that with the cut-throat competition, many startups were failing regularly. He concluded that this was the only way to get initial traction, and he wouldn’t be working on an inventory-led model that could result in losses. So when startups were using same-day delivery models, Sunil decided to do the opposite.

In June 2015, he launched Falphool, an online platform that takes orders for fruit and vegetables in the evening and offers delivery the next morning in North West Delhi.

“With this platform, both customers and the company have benefitted. We have almost zero wastage. In the next few months, with increasing demand, we also added categories like medicines, plants and grocery,” says Sunil Suri, 41, Founder, Falphool.

He adds that in a span of six months, he has been able to deliver to 3,000 customers and is notching up an average of 45 orders a day. He calls his venture the only platform that is giving an end-to-end solution in various categories like fruit, vegetables, plants, medicines, and grocery.

So far, Rs 7- 8 lakh has been invested in the platform. Suri says that he gets an average ticket size of Rs 20, 000 a day. “For customer acquisitions, we use paper flyers and word-of-mouth and these have proved effective marketing tools.”

During the month of November 2015, on customer demand, the platform introduced new types of discounts for different customers. “Till then, we had never thought of discounts and offers. However, we decided to brainstorm and developed a proprietary algorithm in the next seven days, which took 22 parameters into account and gave different final pricings to different customers.”

He adds that it will be a disruptive algorithm, which will revolutionise the B2C segment. Through its implementation, the platform has been able to achieve repeat orders from more than 74 per cent of customers and this figure is gradually increasing.

Survival of the fittest

The groceries segment holds a share of 60 per cent of the total market value in the Indian retail market as food is a basic requirement. The food and grocery industry in India is now worth $383 billion and is expected to touch $1 trillion by 2020, according to a study by advisory firm Technopak.

The major players in the market that lead from the front are Big Basket, Zopnow, Grofers, Peppertap, and Jugnoo, among others. The top five online grocery startups in India have raised over $173.5 million, of which $120 million was raised just this year. Big Basket and Grofers have raised $85.8 million and $45.5 million, respectively.

When asked about the competition against giants, Sunil replies that other players are burning a lot of money pumped in by investors to sustain the business. He, however, sustains the business without burning cash and incurring loss on sales. He says that he will touch the break-even point by January 2016.

“It’s the business model we follow that supports our business. We deliver products the next day. For same day delivery, we charge Rs 45 on every order placed,” says Sunil.

Recently, the platform has contacted small and medium grocery stores who give various deals and offers, and very soon these stores will sell their offers and deals through Falphool.com. Potential customers can see the deals and offers being presented by different stores in their areas. However, currently, it caters to Dwarka only.

Last week, Falphool launched a recipe-sharing segment. It allows cooks/chefs and housewives to share healthy recipes with others and make the community healthy.

It’s also planning to expand its business to other parts of Delhi, Gurgaon, and Noida by June 2016. “Besides, the time has come to re-launch the menu planner as the platform has enough traction and regular customers. It will be re-launched in the next few months as this will be something that is a great value addition,” says Sunil.