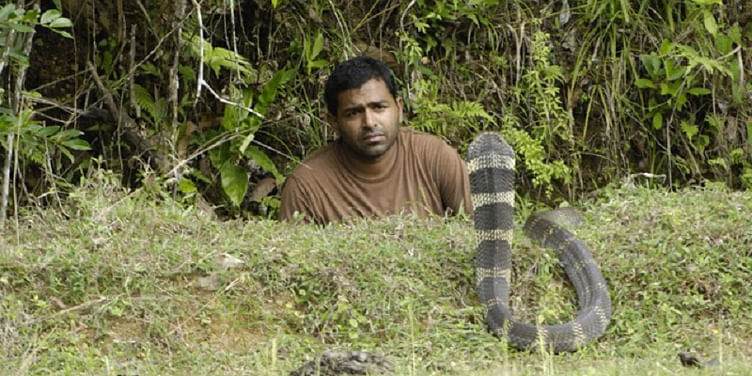 Bengaluru resident and India’s most famous snake man had no ordinary upbringing. He grew up on a farm, his first pet was a snake; and now, he has set up a ‘conservation business’ that’s helping kids in cities come closer to nature. Meet Gerry Martin, the first Indian to be selected as a National Geographic Adventurer, who believes that it is possible to combine your passion with your profession.

Gerry Martin is no stranger to snakes and the wild world. He admits quite candidly that he wasn’t very good at academics, but his favorite pastime was caring for his menagerie at home. Most Bangaloreans are familiar with the Martins Farm, considered a great destination for a day out with farm animals.

While growing up on a farm may have been fun, Gerry insists that ‘it wasn’t as cool as it would be considered now. There was no electricity most of the time, and there was only one bus to school. I don’t think my peers were envious of me,” he says. ‘I just had a life different from them’.

His favourite memory from childhood is spending time with his grandfather, who taught him how to watch nature. Gerry recalls,

I saw my first wild cobra with him. He told me not to worry and that it would go away. We watched it raise its hood for a second and then head on without being alarmed. That’s when I learnt I could watch snakes and be safe.

And with such a unique upbringing, it was but natural that Gerry’s career too would revolve around animals. He ended up at the Madras Crocodile Bank where under the guidance of his mentor Rom Whitaker, Gerry was able to hone his skills with all creatures great and small from crocodiles to cobras. It was during a filming assignment, while working as a curator at the Croc Bank, that National Geographic happened. He was selected as India’s first Natgeo Adventurer, which meant filming with snakes and crocodiles for documentaries and working with some of the best scientists from across the world.

After his television career, Gerry decided it was time to set up his own organisation, and so he started ‘The Gerry Martin Project’. He believes that it is possible to combine your passion and work, but laments, ‘Unfortunately, we are inadvertently painted with the same brush as tour companies and adventure sport operators. His advice to other ‘green businesses’ would be to not compromise to make the numbers, but build a reputation and niche that one is known for”.

So what does a trip for kids on the Gerry Martin Project entail?

What we offer children is a real Nature experience, through which they build a host of skills. They learn the processes involved in camera trapping and understand various environs; they build skills in survival and animal tracking; create and run their own mini ecological projects; and develop a healthy respect for all that’s around them. The schools near our base at Hunsur are going to take on monitoring the lakes in the region as well as a massive otter monitoring and conservation effort that will start in the next couple of months.

And how easy is life for his family? Gerry admits,

I don’t really have a work life, personal life, and social life. It’s all just my life. I think not having those compartments enables me to focus, commit and truly delve into all that I want to do. My wife loves everything natural and is particularly taken up by small things that are ‘cool’. Like ants mimicking spiders and a snake shedding its skin. She also gets me and is a pillar, beacon and sail for me in all that I take on.

Of course, working out in the wild has its share of adventures and snake bites. Gerry recalls an incident in Arunachal Pradesh,

When Rom (Whitaker) and I were in Arunachal Pradesh working on venomous snakes for the snakebite mitigation work that we’ve taken on, I got bitten by a Medo pit-viper and I needed to be monitored for any symptoms. So, we were checking my clotting time and pulse rates amongst other things every 30 minutes. The funny part was there was silence until a couple of minutes before each sampling and just before taking my pulse, Rom would crack some joke or the other and my laughter would make the bite hurt all the more and my pulse rates were off the charts! We love laughter!

Setting up his own business couldn’t have been easy and Gerry is often asked why he left television. “I guess my biggest struggles have been personal ones, not choosing an academic and career path left me wanting to be accepted and that validation seemed to work when I began working with National Geographic. In fact, people still ask me why I left television and I have never been able to explain that the validation I was getting from that career came from everyone but me. Steering myself back to a space where I can feel I bring value and can honestly achieve something truly good has been the struggle for the last few years. It’s not easy admitting this, but perhaps that’s what makes Gerry and his work so endearing too many. It’s also the reason he keeps his projects low-key, to ensure that each child has an undiluted work experience of nature, he never takes on large school groups or too many corporate projects.

Gerry says the challenges of running his own green business are many. These include the lack of investments to set things up. But, all said and done, he says

I am writing this email sitting at our dining table looking at a flock of bar-headed geese and other ducks and waders in the lake. Not that much of a struggle after all, huh?

So next time you are looking for a wilderness experience for your child or you, reach out to the Gerry Martin Project. India’s snake man has shown how going green is good for the planet, and it’s also a lot of fun.