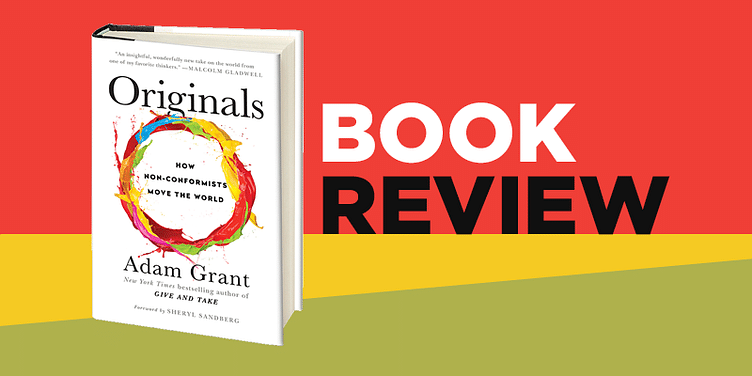 How do original thinkers and innovators view the world and take action on it? How different are they from ‘normal’ people? Can these insights be applied and implemented by others as well? The bestselling book Originals: How non-conformists change the world, by Adam Grant, offers a range of innovation tips and thought-provoking stories. The material in the 322-page book spans startups, big business, politics and entertainment.

Adam Grant is Wharton's top-rated teacher, author of the bestseller Give and Take, and a former junior Olympic springboard diver and magician. He has consulted for Google, Merck, Goldman Sachs, Disney Pixar and the United Nations.

Here are my eight key takeaways for innovators from this inspiring and highly absorbing book (see also my book reviews of Make Your Mark and Gamechangers).

Originality is about coming up with novel and useful ideas, and making these visions a reality. “The starting point is curiosity,” says Grant. The word 'entrepreneur', coined by economist Richard Cantillon, means ‘bearer of risk.’ Entrepreneurs are often labelled as rebels, iconoclasts, troublemakers, mavericks, contrarians or revolutionaries.

However, many successful creators didn’t begin by quitting their day jobs and leaping full-time into their startups. They actually had doubts about their ventures and played it safe. Google’s founders actually wanted to finish their graduate studies first and tried to sell the company for less than $2 million, but found no takers.

Pierre Omidyar launched eBay as a hobby and quit his programming job only after the marketplace earned him more revenue than his job. Bill Gates dropped out of school only a year after his software sales began – and he still had his parents bankroll him. The founders of eyeglasses e-commerce startup Warby Parker kept a backup plan with secure jobs.

Grammy winner John Legend carried on for two years as a management consultant after the release of his first album. Famous author Stephen King continued as a teacher and janitor for seven years after writing his first novel.

“Successful originals take extreme risks in one arena and offset them with extreme caution in another,” explains Grant.

The combination of broad and deep experience is critical for creativity, says Grant. Nobel-Prize winners are more likely to be involved in the arts than less-accomplished scientists, for example, in music playing, painting, woodworking, poetry, or acting.

“People who are open to new ways of looking at science and business also tend to be fascinated by the expression of ideas and emotions through images, sounds and words,” explains Grant. Arts are a powerful source of creative insight, as well as working in multi-cultural contexts or travelling abroad (also check out my book reviews of Idea Hunter and Little Bets).

Originals are good not just at idea generation but idea selection, and are able to detect false positives and false negatives. The Segway was a false positive – forecast to be a much bigger hit. Examples of false negatives are legendary, ones which were incorrectly passed off as unlikely to succeed: HP’s laser printer, Microsoft’s Xbox, Star Wars, Diary of Anne Frank, and the Harry Potter series.

Originals also come up with many failures, dead-ends, blind alleys and mediocre products – but get good feedback for their ideas from a broader community of peers. Today, social media offer a good means of idea validation.

Entrepreneurs may not be good at creative forecasting because they are too close to the solution; managers and sponsors may stick too closely to existing models. There may be wisdom in crowds, but it depends on which crowd you ask – fellow creators may be the best.

People who are successful entrepreneurs in one domain may not always be able to understand and succeed in other domains – Steve Jobs himself bet on Segway. Domain inexperience, excessive enthusiasm and over-confidence can come in the way of judgement. To succeed, products need to be practical and not just have a ‘wow’ effect; a balance of intuition and analytical thinking helps.

“In a rapidly changing world, the lessons of experience can easily point us in the wrong direction,” says Grant.

It’s one thing to see the brave new future, and another thing altogether to get others to embrace your vision and products. A combination of power (authority, control) and status (respect, admiration) is needed. Change can come from outside the system, or infiltrating it from the inside.

Successful entrepreneurs can create an effective ‘frame’ for the conversation and dialogue, sometimes by admitting up-front what the challenges and drawbacks are. Honesty and modesty in communication can help build trust. New ideas can succeed within large organisations if propagated upwards and downwards, and not necessarily to middle managers.

Once you have power and status, you can stand up for new effective ideas – as Donna Dubinsky did when she stood up to Steve Jobs and suggested a change in Apple’s distribution system. In fact, the Macintosh team instituted an annual award for those who could successfully challenge Jobs. (Dubinsky later went on to found PalmPilot and Handspring.)

Radical ideas sometimes need to be tempered for widespread acceptance, as evinced in the women’s voter movement in the US; coalition politics also led to changes in strategy and tactics. On the technology front, Meredith Perry recast her radical vision of ‘wireless power’ as a new type of transducer, and got support from Oxford and Stanford for her startup, uBeam.

New ideas need to be pitched in such a way that they are sufficiently different but not too difficult to understand. Early customer testimonials can help in this regard.

Procrastination in a planned manner can actually bring in more ideas through divergent thinking. “Procrastination may be the enemy of productivity, but it can be a resource for creativity,” explains Grant. Rather than ‘seize and freeze’ a solution quickly, it can help to dabble through productive brainstorming and creative procrastination.

Originality cannot always be rushed – as shown by Leonardo da Vinci, who spent over 15 years on ideas for ‘The Last Supper’ while working on other projects. Martin Luther King’s legendary speech script was being revised right till the last minute, and the phrases about the ‘dream’ did not appear in it – he winged it and improvised ‘like some sort of jazz musician.’

“It’s true that the early bird gets the worm, but we can’t forget that the early worm gets caught,” jokes Grant. Rather than being a ‘pioneer’ or first mover, there are also advantages of being the ‘settler’ or next mover – such as riding an educated market, improving the first-mover’s technology, and launching new features or products without fear of cannibalising older versions.

For example, Magnavox was a pioneer in gaming, but Nintendo blew it out of the water. First-mover advantages, of course, are chances to create patents, or when network effects accrue to the first mover. But premature scaling can lead to their downfall.

Some creators peak early, others bloom late. Conceptual innovation can happen early in life and may not require excessive years of work to build, but innovators must be willing to quickly move on. Experimental innovation comes through years of trial, error, learning and evolving, provided the innovators are able to shake off blinders from past experiences.

“The more experiments you run, the less constrained you become by your ideas from the past,” advises Grant. Relentless curiosity and constant tinkering are needed to keep the creative juices flowing late into life (see also my book reviews of Creative Confidence and Cross Industry Innovation).

“Groupthink is the enemy of originality,” cautions Grant; it promotes default views instead of diverse thoughts. Edwin Land, Founder of Polaroid, created the iconic instant camera and patents in light filters – but he and his company failed to ride the digital wave.

A company culture which is too strong and homogenous may end up becoming a cult, which can be detrimental to the founder and startup in the long run. Hiring patterns tend to be of three types: professional (skill-based), star (driven) and commitment (loyalty). However, diversity of thoughts and values is also needed, particularly in industries that are more volatile than predictable.

Diversity and healthy debate can overcome the organisational problems of over-confidence and reputational concerns. Investment firm Bridgewater is recognised for having a culture where criticism of the CEO is not only encouraged but circulated to all employees.

The company has drawn up a list of principles and values supporting free inquiry and productive thought, based on idea meritocracy and radical transparency. ‘Devil’s advocates’ or critics are not just enlisted but allowed to emerge. Data-based logic and experiments are used to enhance experience, intuition and conversation in the company.

Entrepreneurs need not be endlessly optimistic – they should also be able to harness ‘negative’ emotions and convert them into positive power. Fear of failure can be used to overcome complacency and devise backup plans. (See also my reviews of the related books Fail Fast and Fail Better.)

Fear of the unknown can even be re-framed as excitement and a sense of adventure. Even if there only a few early followers or adopters, this can be converted into a sense of achievement and emotional strength. A sense of urgency along with a sprinkling of humour can help overcome fear, as shown by political activist Srdja Popovic.

One chapter in the book also offers parenting advice on making children more creative, an unusual but welcome feature in a business book. Later-born children may be more creative and rebellious, but elder siblings should also be encouraged to be more creative. This can be done by elevating their aspirations, encouraging empathy for victims of bad behaviour, empathising values over rules, and praising not just their new creative works but themselves as creative people.

The book concludes with a useful chapter on how aspiring innovators and change-makers can put the above principles into action in their individual and organisational lives. I have summarised these action items in Table 1 below; see also the book’s online companion for the author’s blog and e-newsletter.