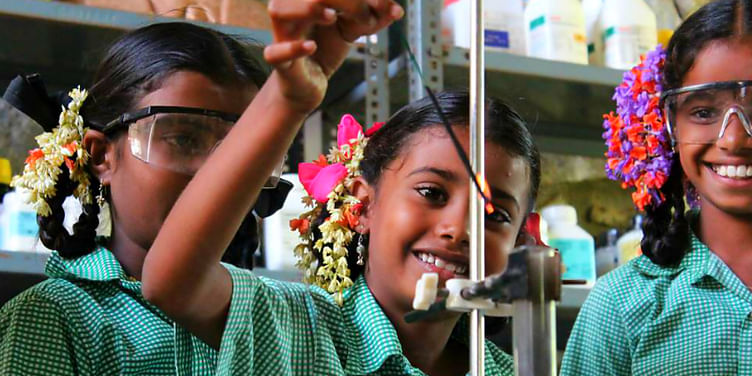 He sees Vasantha sitting on the sidelines while class is in session; she has a modest yet captivated audience of two other little girls who nod in animated reverence at every word she utters. A visiting dignitary asked her why she was conducting a sermon of her own accord. In reply, she takes him by the hand to her hut’s frontyard. A chalk-stained, overused blackboard bears the evidence of her impassioned efforts at playing teacher and scribbling on it day after day for years, to anyone who’s interested in learning about the joys of science with her. And people did come.

Somewhere in Rajasthan, a little girl astounded an unsuspecting audience by remarking that her role model is the sun. “You can’t even look at it, directly!” she chortles. She doesn’t even know how profoundly she’s impressed a gentleman watching.

If R. Shravani had stuck to her meek ways and not spoken up, her family would have been penniless. But she broke her silence, convinced her parents to hold on to the cow they were about to sell for a quick buck, and turned to Agastya for help so she could become a contributing member of her family. The cow gave birth to calves, and Agastya gave birth to a young leader who inspires millions today.

The man who was amazed at the display of grit in all three instances was Ramji Raghavan, Founder of Agastya International Foundation. The organisation may conduct activities with a yearly spend of Rs 30 crore across the country today, but at its heart is one simple aim – to help every Vasantha and Sravani at the bottom of the food-chain find their way to the top – by bringing their science textbooks and tempers to life. It wants to produce not job seekers, but job creators.

Epiphanies at every turn

Ramji had many epiphanies while founding Agastya International Foundation that helped him build the organisation into the epicentre that it is today of our country’s long-term scientific future.

An economics-grad at Hansraj and MBA from London Business School, Ramji still owed his most intrinsic values to his first alma mater, Rishi Valley, with the kind of non-conformist exposure the institution is known to provide, coupled with their patriarch’s love for ecology.

Ramji had a career in finance and consultancy with various golden-ticket companies like AJ Ferguson, Citibank etc., and even started up in New York. But he had dreamed a dream that looked rather different – of being the principal of a school with a creative model in the foothills of the Himalayas. His former principal, Mr. Balachandran, told him to start the unique institution he had always wanted, instead.

Ramji often wondered whether Rishi Valley Founder J. Krishnamurty’s dream was ever fulfilled. “This question kept persisting. I theorised that he did not have people who could translate his vision into action. Teachers were integral to the process, to have a multiplier effect,” he notes.

Ramji’s career took him to London, at a point. “But my best friend there, and my spiritual mentor, Gopi, told me it was not my karma to be doing what I was doing.”

Ramji didn’t take the signs lightly. He returned to India and dove head-first into the problem statement, starting with a meeting with friend (and subsequent co-founder) PK Iyengar at the Atomic Energy Commission. He was on the team that made the atom bomb. “He told me what Bhabha told him, and confirmed my gut – India is not producing minds with a creative bent.”

Ramji’s emphasis on creativity was right on the money – but he knew that for real change, this must be made available to the masses of India.

The need was to disseminate the scientific temper. There is a process of discovery and experimentation – that all starts with curiosity.

He defines Agastya’s mission as kindling curiosity, to nurture creativity, and finally, to help one act on their instincts, by building confidence. “The Indian problem is not lack of intelligence, it is lack of self-belief,” Ramji opines.

When the time came to create a model, Ramji credits three chance encounters that inspired him to create all the countrywide schemes and programmes that Agastya conducts today.

His idea found resonance in his old English teacher Mahavir, friend Iyengar, his former principal Balasubramaniam, and his father – and together, they became the five founding trustees.

After consulting with Andhra Pradesh Chief Minister Chandrababu Naidu, who was then the MLA from Kuppam, they purchased a 172-acre property in the town. Ramji adds,

The good news was that we got the land, but the bad news is that we ran out of money. We came up with another idea- until we have a campus where they can come to us, why don’t we go to them, through a mobile set up?

Homi Bhabha Centre for Science Education donated science experiments for a travelling science fair, with which Agastya could bring more experiments to the table. An arena lined with tables holding apparatus generated unprecedented levels of buzz in the villages. “We had expected 500 students in the start, and 5,000 showed up,” Ramji recalls. That number even jumped to 24,000.

A dose of inspiration was infused into the event when Ramji met three girls. “We were so short-staffed and we noticed that these government teachers accompanying the students weren’t trained to conduct tours around our fairs. A couple of girls came up to us and told us – ‘It looks like you are short on teachers. What if you could train us to teach?’. This was an epiphany- children teaching children,” he says. They took the chance and realised that peer-to-peer teaching was the answer to many educational woes.

Agastya set up the Young Instructor Leader (YIL) programme, where each YIL is tasked with training five young instructors for the Agastya mega science fairs. During this process, YILs are actively encouraged to create their own teaching methodologies. Over the years, the ambit of the YILs programme has increased to train them in the use of computers, understand ecology, so that they blossom into all-round, holistic individuals who will be proactive grassroots leaders working for the welfare of their community. R Sravani, who now earns nearly Rs 12,000 a month, is a gleaming product of this endeavour. Ramji once had the chance to speak to her, and he asked her about how she sees life and society. “The wise one tells me, ‘There is no poverty, it is simply a state of mind.’ Our purpose is to see people like Saravani do well,” Ramji says.

While the organisation was waiting for more money to trickle in, an old classmate of Ramji’s from Hansraj, Rakesh Jhunjhunwala, donated a rural transport vehicle to them. “We brought in a tractor driver, put him in the van with a box of science experiments and asked him to go across to as many villages as he could.” A few weeks elapsed until they met him again. They asked him how it was going, and he said it was absolutely fantastic. The kids couldn’t get enough of it.

Rakesh, thoroughly impressed by how his van was put to use, called Ramji and told him to come up with a 10-year plan on how the foundation intends to scale. “So I went to him with a plan and said we needed Rs 90 crore.” To his absolute amazement, Rakesh committed to Rs 50 crore and also formally came on board.

However, this chunky donation also meant that Ramji’s long standing dream of opening up a campus with differential learning was not going to be a castle in the air anymore.

In no time, with the help of Iyengar’s contacts at Bhabha Centre, this castle, loaded with practical scientific set-ups, experiments and demonstrations, complete with a planetarium, inaugurated by none other than APJ Abdul Kalam,was ready to amaze the aspiring Einsteins from the country’s villages. A couple of hours from Bengaluru, the campus enthrals 600 children daily.

Another influencer in Andhra offered to set up 3-4 such centres, and bear the operation costs,”Ramji explains. Today, about 60 centres like these have been constructed. Every class from of students is to visit the campus five times a year, where they must start with observing and learning, and gradually proceed to use the apparatus and experiment on their own.

Meanwhile, the Karnataka government also wanted to run these mobile labs across the State, and cover the operation costs, while a woman from Denmark had pledged her heart and soul to the YIL programme.

It also brought Yelappa Reddy – a well-known ecologist – to their campus one day. “We had very interesting soil – it was degraded but had the potential to be revived,”Ramji says. Yelappa asked if he could move in and spearhead the project. “This was destiny. It was always a dream of mine, like Krishnamurthy’s, to contribute to the country’s ecological resources. And my campus was now to become a centre.” The ecological hub, just like Rishi Valley, is now open to students who want to learn about spiders, medicinal plants etc.

Soon enough, National Knowledge Commission showed interest, and endorsed their efforts to be replicated on a nationwide scale. Meanwhile, the State Bank of India, AM Naik, executive chairman of Larsen & Toubro, NR Narayana Murthy and Sudha Murthy through the Infosys Science Foundation and Infosys Foundation as well as HNIs like Alok Oberoi and organizations like The Deshpande Foundation have made staggering contributions to Agastya’s initiatives over the years.

When Ramji met Vasantha, the impassioned student-teacher in 2009, he was blown away by her efforts to help her peers love science. The earlier-described girl with the blackboard went on to become a symbol, and soon, a project. The Vasanthas in nearly 300 villages were identified, and given rigorous leadership and teacher training in the community centres built by Agastya. The same centres double up as classrooms, where the trained young ones take it upon themselves to coach the lesser privileged- often dropouts, in night-school. “Project Vasantha , for the community, by the community, had the potential to revolutionise learning at an exceptionally low cost,”Ramji explains. With centres in 300 villages, Vasantha, the initiative, has trained 800 teachers, including 280 night-school volunteers, and uplifts 15,000 students under it. Vasantha, the girl, who led Ramji by the hand into the light, remains to be a part of this initiative and has also trained to become a YIL.

And on the lines of mobile labs, the foundation based its latest innovation – the ‘lab in a box’ programme. The world of science is neatly packed in a box and gifted to a school to keep for a period of three weeks. The teacher is helped by an instructor to familiarise herself with the apparatus, after which, the teachers are given the reigns to completely take charge of how they are going to utilise the models. As opposed to the mobile vans that only visited the village for an afternoon, these boxes stay with a school for three weeks. Their innovations, especially the mobile labs and the Lab in a box, have won them awards at Google Impact Challenge and Marico’s Innovation for India 2016.

Agastya works on an annual budget of Rs 30 crore and has 850 employees country-wide. It has 138 mobile lab vans, 50 labs on bikes, and 60 science centres.

Sravani, Vasantha and 2.5 lakh fully trained young teachers like them are marching along with 8 million Einsteins in the making, towards making India a scientific superpower. Meanwhile, even as Ramji’s Shangri-La reverie evades him, the spiritualist in him attains Zen knowing that he is fulfilling J Krishnamurthy’s prophecy.