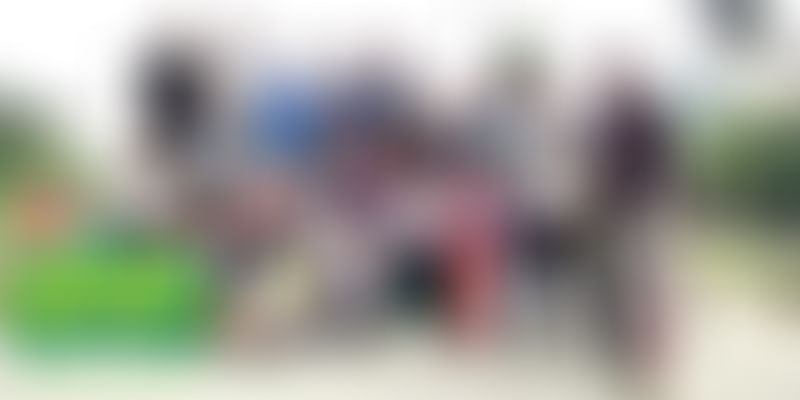 With the onset of rains, Bengaluru’s already debilitating traffic issues have doubled. Of course, it in turn affects pollution levels and results in bad health. But some citizens are not taking this transformation for the worse lying down. A few are working towards make their city a traffic-and-pollution-free place.

The HSR Cyclist Group, in particular, has been seen doing wonders and has marked notable progress. A voluntary organisation, this group is driven by the commitment of 20 cyclists forming the core group, , which plans events and also helps conduct surveys on infrastructure. This group was started in 2014 by Shashidhara K, Neeraj Upreti, Chinmoya Routray and Shubhesh Kumar Raut.

Being a technologist with a background in creating solutions for startups in mobile, sustainability and social impact space, Shashidhara embraced entrepreneurship easily.

I was a cyclist most of my life and I observed the growth of cities and the increasing traffic congestion. The only solution to this was to promote citizens adopting cycling as their basic local commute. This led to a discussion with fellow cyclists and we formed HSR Cyclists Group

The main challenge they faced was to get the citizens to come together and experience cycling as a group. Having had the opportunity to participate in few Cycle Day events organised by DULT (Department of Urban and Land Transportation) and BCOS group (Bangalore Coalition of Open Streets) in early 2014, Shashidhara and his team strengthened their belief that citizens will adopt cycling, only if there is sustained effort to encourage this activity. They formed the HSR Cyclist Group, a non-profit and a voluntary group, in August 2014, to promote cycling in HSR layout.

Their first step was to conduct group rides and Cycle Day events in their own community.

I approached DULT, local organisations and traffic police to get support for this event. We received great response from both citizens and businesses and we started HSR Cycle Day event in September 2014. We have so far conducted 20 events, and this helped us take cycling to next level with infrastructure support

With the pressing need for safe parking arrangements, the group applied for NIP citizens of the city challenge in 2015, along with Somasundarapalya Neighbourhood Improvement Trust (SPNIT) and were one of the 11 projects selected for the grant. The objective was to provide parking infrastructure at 23 locations in HSR layout, including open and covered parking to promote active cycling.

Once we provide basic infrastructure such as parking structures, we can expect majority of residents switching to cycles for short-distance commute. To have a better living, we need to practice sustainability in our daily life. What we do today will impact future generations, and it is our responsibility to reduce carbon emissions. Cycling is not only fun but it also will make you healthy. I engage in long rides with our groups, to keep me energised about this mission

adds Serene Banergee, an active member of the group.

My advice is to form locality-based cycling groups and promote active cycling with regular group rides, work with local authorities and resident welfare associations to introduce cycling infrastructure, and the community will grow