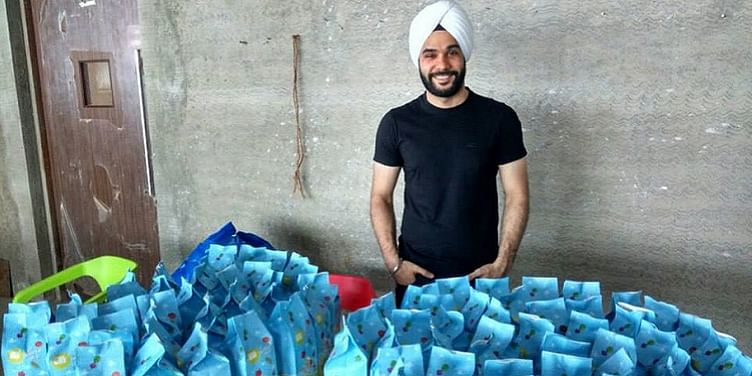 “Food is possibly one of the most unglamorous and difficult businesses. The model is difficult to crack and there are several dynamic variables at play that could go wrong. That is why there are many restaurants that start and shut down within a year of operations,” says 29-year-old Gurmeet Kochar, Founder and CEO, SpiceBox.

Despite his research, which showed how difficult a food business can be, Gurmeet went ahead and started SpiceBox. The Mumbai-based foodtech platform delivers home-cooked meals and tiffin services to your doorstep.

Gurmeet, who always wanted to startup, felt that he needed to create something that people would always want, and would possibly never move away from – the obvious answer was food. Gurmeet started his career with Edelweiss Capital as an investment banker at the age of 20, before moving on to Standard Chartered.

It was at Standard Chartered that Gurmeet realised that he wanted to start up. Hailing from a business family, Gurmeet was greatly inspired by his grandfather, who had come to Mumbai in 1947 as a refugee and ending up building a business of his own.

It was during one conversation with his colleague at Standard Chartered that Gurmeet got the idea for SpiceBox. His colleague offered Gurmeet his whole month’s salary for home-cooked meals and told him ‘you don’t even realise how lucky you are’.

That is when Gurmeet realised how people craved home-cooked meals. However, despite realising that the food business wasn’t easy, Gurmeet knew he could run a business because of his background in investment banking.

Looking at the number of people migrating into Mumbai, for whom time was a precious commodity, the creation of a tiffin service for home-cooked meals seemed like the best idea.

“I realised that for a food business to be sustainable, unit economics was important, more so because I was providing meals at an economical price while bootstrapping,” says Gurmeet.

Starting out in 2011, when the foodtech wave wasn’t big, the SpiceBox team found it difficult to even build their first website. Today, while logistics is easy for SpiceBox, the first delivery vehicle was Gurmeet’s black sedan car.

“I would do 55 deliveries a day for the first six months; it also helped me talk to customers and understand what they really wanted,” says Gurmeet.

After six months, Gurmeet was also able to crack a deal with the Dabbawala Association to do the deliveries for SpiceBox.

Not hailing a from a food background, there were different challenges the team had to face. The chefs quit in the first three months without much notice. During this time, Gurmeet’s mother stepped in, and for close to four days, she cooked food for over a 100 people by herself.

From the beginning, the team at Spicebox has been focussed on great quality. The team believes that one customer should bring in over a 100 more, and a brand gets stronger by word-of-mouth.

Bootstrapping and getting the numbers

“I am sure that I want to do this for the rest of my life. I want to grow at a steady rate, so I have paid a lot of importance to bootstrapping. When your own personal DNA is in the in the game, you see things in a different light. The company and you become one single entity. I believe that first-time entrepreneurs need to bootstrap their way and understand unit economics; break-even analysis; and how they will be able to sustain before they seek external investment,” says Gurmeet.

By December this year, SpiceBox intends to expand to different cities starting with Pune and Bengaluru. The team has also ventured into the on-demand food space, with another brand Oye Kiddan and The Bohri Kitchen. Similar startups in the space include Hola Chef, InnerChef, FreshMenu, and food-delivery startups like Swiggy, Zomato and Scootsy.

In five years, SpiceBox claims to have served one million meals, serving over 1,000 meals in a day. The cost of a meal is Rs 125, including delivery charges.

In the first quarter of this year, $51,500,00 was pumped into food tech startups across 10 deals. Two of the big deals in the food space have been Series A funding by FreshMenu and Series C funding of $35 million by Swiggy.

However, being an operations-heavy business, there are few players that can handle the game. Players like Dazo, which started out great, had to shut operations, followed by Spoonjoy, which was acquired by Grofers, and TinyOwl, which has joined hands with Roadrunnr and is now called Runnr.