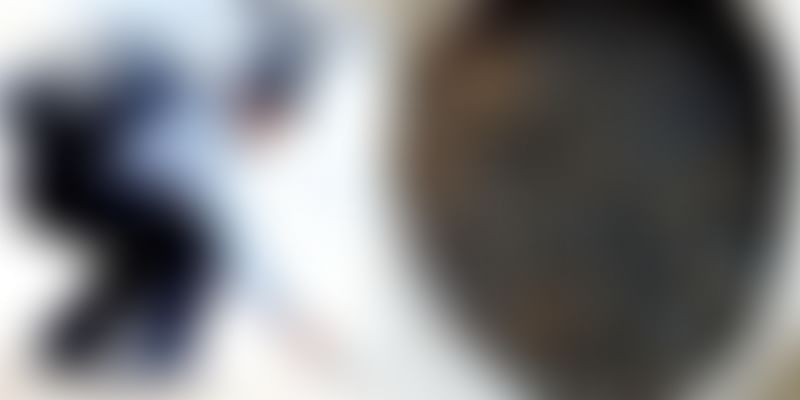 On the busy streets of Bengaluru, scores of commuters regularly fall victim to the ‘nail mafia’. Techies dressed in their formals, parking their vehicles on the side of the road because of punctured tires is not an uncommon sight on the tech corridor between Central Silk Board and Marathalli . Though most of them put on the hazard lights to huff and puff while trying to replace the deflated tyre, the two-wheelers are rushed to the nearest repair shop.

While most have accepted this as routine, a staff systems engineer at Intuit chose to do something about it.

After surviving multiple instances of flat tyres, 42-year-old Benedict Jeebakumar chose to initiate a personalised movement – Nail Chronicles – to clean up the 6km stretch all by himself, not once, not twice but almost 500 times and ended up collecting almost 37kg of nails.

It all started in 2014 when Benedict started to experience frequent punctures on his two-wheeler on the ORR (Outer Ring Road), especially on the stretch between Silk Board and Eco Space (Bellandur). He assumed that the flat tyres were due to design flaws in the bikes and poor-quality tyres and tubes. He then found the real cause for the punctures – the intentional spreading of nails by miscreants.

Initially, I used to collect the nails from the road repeatedly and show them to my friends and just feel sorry for the state of the road. Then, I met up with a wise friend who suggested I take it forward rather than just pick up the nails and feel sorry. He suggested that I approach the authorities on their Facebook pages, saying ‘do not stop till they (the miscreants) stop’, says Benedict.

To create awareness and curb this menace, Benedict started a Facebook page called My Road, My Responsibility in 2014. Subsequently, Bangalore City Police arrested a person in this regard. After the arrest, the issue stopped temporarily, but resumed soon after.

In the initial days, Benedict’s two sons were very curious about what their father did. His 10-year-old son asked him how he picked up the nails. On finding out that his father used his bare hands, he suggested a better idea,

The next day, I used my son’s magnet from his collection of toys to collect some more nails from the same bridge (Agara flyover), says Benedict.

The small magnet did not do much, but it did give Benedict an idea. He headed to the nearest scrap merchant to buy an even more powerful magnet and continued with his combing operations.

Though the repeated postings on social media gathered some serious attention, the spreading of nails still continued.

The nail menace stopped for around 20 days when the BCP arrested one person in September 2014. But it resumed and went on till March 2015, when BCP made another arrest. The nail menace resumed and continued till it was recently reported in several newspapers. For the last two weeks, I have not seen any new nails on the ORR stretch, which is a good sign, but we need to wait and watch. We need to be watchful and alert the authorities in case we see this menace happening again, says Benedict.

Coming from a city like Tuticorin, a coastal town in Tamilnadu, Benedict considers his initiative a community service.

This journey so far has helped me personally more than anyone else. This journey has helped me put into action some of the things I learnt during my early school days, like responsibility, perseverance, and courage. It helps me follow these disciplines in other areas of my life too. Above all, I experienced the joy of voluntary and non-profit service for the first time in my life. I wish to continue to grow in service. My father remains my biggest inspiration

It is definitely ironic how a techie with a full-fledged job has taken up the huge responsibility of carrying the badge to prevent others from becoming victims. It is still a one man’s army fighting for a bigger cause. As long as people raise their voices against such illegal activities, there is very little hope to curb this menace. But with responsible citizens like Benedict Jeebakumar, there is always a superhero to look up to.