From virtual to reality, Infurnia’s solution captures your imagination 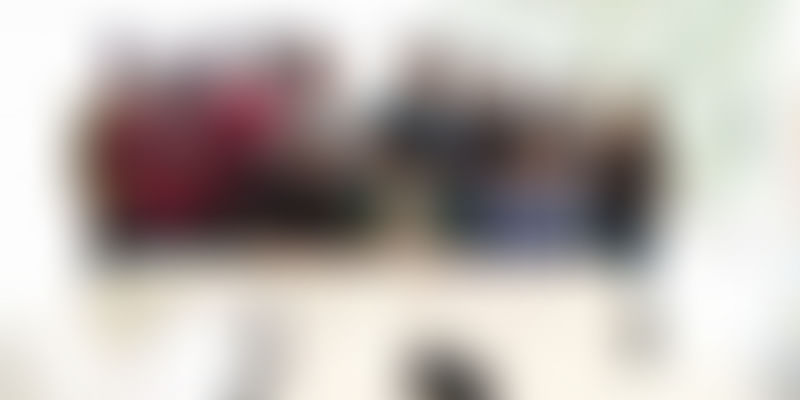 Raunak Arora, a Bengaluru-based businessman, spent around Rs 20 lakh furnishing his palatial new home. He was promised an exceptional kitchen that was within his budget, but when the end product finally came, he was unhappy with it. What he had visualised and reality painted two different pictures.

He wasn’t alone. Nikhil Kumar, whose father was associated with the furniture industry, realised that the consumer was often unable to visualise how furniture would look before the end product was ready. He thought of creating a solution for this problem.

As luck would have it, Nikhil, 27, an IIT-Bombay graduate, met Lovepreet Mann, 26, an IIT-Kharagpur graduate, through a common friend. Realising that Lovepreet had the same idea in mind, they decided to join hands to launch a startup.

The duo decided to start a platform that would focus on bringing 3D visualisation solutions for furniture design.

In December 2014, they incorporated Infurnia, a technology and services company catering to the furniture industry. It is a SaaS-based design tool for furniture stores and designers.

“We build innovative technologies and connect different stakeholders in the industry, who are using it. We have solutions for manufacturers, furniture stores, franchisors, interior designers, builders, and later for end-consumers. Our customisation technology allows you to instantly change the shape, size, laminate, colour and hardware. Internal features like shelves, drawers, baskets, and pullouts can be interactively fine-tuned to a customer’s requirement,” says Lovepreet, Co-founder, Infurnia.

He adds that it is such an easy tool that even interior designers who are not tech-savvy can use it. They can also interactively customise the design at client locations on a tablet. It’s completely web-based. Nobody needs to download anything. “What we offer is CAD-like functionality with a really easy to use and pleasing interface, and design speeds no other tool can match.”

Where there are a few companies that offer visualisation, Infurnia goes a step further and offers virtualisation. All a person has to do is take panorama photo of their kitchen and the platform creates a virtual room which has the exact same size, shape, doors and windows instantly. This virtual room is then used to implement the new design and the customer can see exactly what his or her new kitchen will look like.

“The current players either visualise the furniture in standard virtual rooms or they ask you take measurements of each and every wall, door, and windows; then use that to create a virtual room through a room planner app, which is again not the easiest to use,” says Lovepreet.

This innovative product eliminates the cost of hiring an expensive CAD team and infrastructure, reduces sale conversion time, traveling costs for the interior designer, and increases the chances of conversion too, he explains.

Initially, the platform was designed to focus on the visualisation aspect of furniture, but the founders soon realised they could add real value if they actually allowed customers to customise the furniture as well. When they went to market with their first consumer solution, they realised not everyone was interested in customising furniture to their requirement themselves. So, they decided to expand their offerings to include interior designers and end-consumers.

“We will soon be launching a customer-facing product, and have in-house designers for that product. The kitchen design product that is currently live does not require any assistance from us once a manufacturer starts using it,” says Lovepreet.

The platform launched the first product for furniture stores in June this year.

“Our technology solution is one of a kind. Given the fact that technology isn’t constrained by geographical boundaries, our revenues from this segment can run very high,” says Lovepreet.

For their only live product, design tool for furniture stores, the platform operates on a pay-per-use model. So, a store with low volumes can pay less, while a seller with high volumes will pay more.

It started sales in Bengaluru in June, and has around 25 clients in the city so far. In July, they launched the service in Mumbai, and are seeing good traction there as well, with more than 10 clients already on board.

It plans to launch services in eight other cities in August — Delhi, Hyderabad, Chennai, Kolkata, Ahmedabad, Pune, Kochi, and Guwahati.

Besides, the duo is in talks with stores in the UAE to expand the global footprint.

In May 2015, the platform got an angel round of investment. It raised seed money from Idein Ventures in January 2016.

Its major focus since raising a seed fund has been building the core team. Additionally, it has made large investments in product development. A fraction of the investment was utilised in developing office infrastructure.

“More than funds itself, it was the expertise of our investors that steered Infurnia towards a manifold increase in value,” says Lovepreet.

Why are startups rushing to furniture Inc?

According to Redseer Consulting, home furniture is a $25 billion market in India that is set to hit $35 billion by 2020. The online furniture market is pegged at $250 million, and is slated to touch the $700 million mark by 2020.

Furlenco, Urban Ladder, and Pepperfry are some known names in the online furniture segment. In the past few years, these brands have also raised over $200 million, collectively. These ventures, with many other e-commerce platforms, account for only 1 percent of the total furniture market.

However, these traditional software have limitations, as they require a separate licence for each user and cannot be used anywhere else except on the machine they are installed on.

We are building products for various stakeholders in the furniture industry --- the manufacturer, furniture stores, interior designers, builders, and consumers.

“The furniture store product has been launched, and is receiving a great response from users. We will be launching across all other verticals soon. Right now, we are only focusing on kitchens, but within two months, we will expand into bedrooms, and then into living rooms. We plan to cover the complete house,” says Lovepreet.