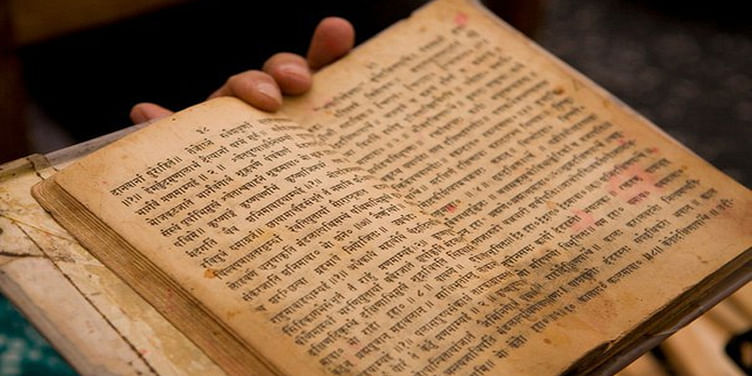 There was a time when people were moving from ancient to modern, breaking free from orthodox teachings and accepting more radical and pragmatic schools of thought. However, times have changed again. Now, the society is at the brink of saturation in more ways than one. Slowly, people are falling back to old texts, old fashion and old music to find recourse.

It is said that the Vedas and other texts of wisdom contain the secrets to modern management, and professionals are now seeking them out to resolve different business problems. One such text is the Patanjali Yoga Sutra. A native saint of Kashmir, Patanjali was the author and compiler of the sacred epic text. Divided into four chapters, the Patajali Yoga Sutra is the most translated Indian text, available in over 42 Indian and non-Indian languages.

Yoga doesn’t just refer to the asanas and meditation. In a more dynamic form, it is a way of life. It throws light on the nature and tendencies of the human mind. Patanjali stated that the key to a joyful life lay in knowing the nature of the mind and understanding human behaviour. He talks about the different modulations of the mind. These could very powerfully be used in the modern corporate scenario to understand why even the best employees sometimes fail to perform to their best. Doesn’t it often happen that we hire candidates who display academic brilliance yet struggle at the workplace?

In this post, we’ll discuss five such modulations in the context of the work environment.

Dwelling upon the past

Employees may suffer from a mental block caused by a past event, thus affecting their performance at work. For example, an employee who is a fresher with no past work experience might consider his inexperience to an unfavourable factor that could affect his work. The fact that this person obsesses over his apparent incompetence in itself can hinder their performance.

Being physically present but mentally absent

Some employees simply hate their jobs. They just stick around either because the pay is good or because the organisation is good. But they don’t feel a connection to the job or to the company. Employees at this state can’t find enough motivation to contribute to the organisation.

A typical example of this would be during notice periods, when some employees tend to pay less attention to their work as they probably did during their initial days on the job.

Patanjali warns time and again in his sutras to beware of this trap. A wrong understanding of reality is often the root of all problems.

Information may be interpreted in the wrong way or employees may have incorrect concepts in mind, which can make it difficult for them to perform their assigned job roles. For example, a manager may ask an employee to rework on a project report. The problem really may be with the report, but if the employee thinks that the problem lies with himself, then this is a classic case of viparyaya.

The human mind is such that we look for a proof for everything. Be it love, friendship, honesty or even God.

Similarly, employees often look for proofs to believe in their organisation’s product or service. If they fail to find them, they start questioning their place in the company. For example, some employees constantly look for incentives or acknowledgements for every task they perform. This may be because they feel the need to be assured of their good performance.

Both forms, if taken to extremes, can create trouble for the employee and the employer. Understanding the problem solves 50 per cent of it. Hence, once you know why your employees aren’t performing, you could either speak to them or create favourable situations to help them.

Considering employees as human beings and not machines can make us compassionate towards each other. Understanding people can help you create long term relationships with them, which not only reduces employee turnover but also positively impacts their productivity and affection levels with the company.