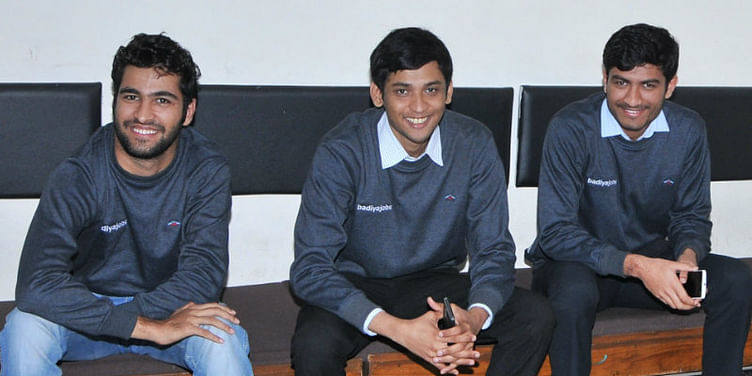 Badiyajobs throws up jobs with relevant skill-sets, location and salary compatibility so that the job-seeker does not waste time attending irrelevant job interviews.

It’s not just employees who boil the ocean to get the right job. Employers too struggle to find the right candidates while recruiting for good entry-level jobs. The gap, however, has been reduced with the sprouting of startups that address the needs of both employees and employers of entry-level jobs.

The matchmaking algorithm of Delhi-based Badiyajobs throws up jobs with relevant skill-sets, location and salary compatibility so that the job-seeker does not waste time attending irrelevant job interviews.

It enables employers to recruit entry-level job-seekers, such as tele-callers, sales executives, data entry operators, drivers and delivery boys, among others in a few steps, while assisting job-seekers find jobs as well.

Founded in September 2015, the startup uses role-specific assessment technology that grades jobs-seekers on relevant skill-sets. Badiyajobs leverages technology extensively in assessing candidates through machine learning. Using the Android app or by giving a missed call, a job seeker can register himself within minutes. Badiyajobs developed this tool internally in a period of six months.

The origin of the idea

Aditya Sriganesh met Pavan Minnikanti in Chennai when the latter was running an edtech company. Pavan (26) had been trying to recruit a tele-caller and a field sales executive, an urgent requirement, for over a month.

“A little bit of Googling later, we found ourselves on a site that sold a database of entry-level job-seekers. Excited, we signed up to buy 20 contacts of job-seekers. Two hours and 2,000 bucks later, to our utter dismay, we found that some candidates’ phones were switched off, half the candidates were uninterested and a couple who said that they would turn up for interviews eventually did not. We witnessed first-hand the challenges small and medium business faced in terms of recruitment,” says Aditya.

Pavan has been Aditya's (24) senior at college and as well as on several projects they worked together in the skill development sector. Having worked as a consultant at the grass-roots level, both have travelled to over 50 small towns and villages. The need for entry-level candidates from the bottom-of-the-pyramid segment inspired the duo to come up with the idea of Badiyajobs. Pavan has around 6 years of work experience in skill development sector and is a founding investor in Badiyajobs.

Aditya met Nitesh Verma (24) through mutual friend and started Badiyajobs with the vision that technology, if rightly implemented, can bring about a large-scale impact to millions of people in India. Next, they thought that technology could provide opportunities to everyone and improve livelihoods on a massive scale. Later, they roped in Manoj Bingi to head operations in Badiyajobs.

Getting the product-market fit right was one of the biggest challenges for them. When they visited small towns and villages, they noticed the extensive use of smartphones, especially lower-end ones with small storage running on 2G connections with the preference of vernacular languages.

The target segment of Badiyajobs are the young job-seekers from the lower-income groups and therefore the challenge lay in building a small-sized app with simple user experience in regional languages that can work well on 2G connection.

“With smartphone penetration rapidly rising, we believed that the time was perfect to solve this problem using technology,” says Aditya, an IIT Madras graduate who has worked as a strategy consultant at KPMG.

Nitesh, who graduated from IIT Delhi, has worked as a developer at Times Internet. Manoj (24) is a graduate from IIT Delhi to head operations.

Badiyajobs raised an angel round of funding of about $100,000 from alumni IIT Madras in April 2016.

“Challenge faced during the initial days was to build technology for first-time smartphone users - a small-sized app, with extremely simple UX in regional languages and which works well on 2G connection,” says Aditya.

Currently, Badiyajobs has 150 employers, including names like PVR Cinemas, HDFC bank, Uber, Urbanclap and Swiggy. These employers are charged a fee for recruitment and not for database, which is in the range of Rs 4,000-8,000 per recruitment. The revenue has grown over 50 percent month-on-month.

In the freemium version, employers can directly contact candidates who have applied for their jobs. In the premium version, all that the employers have to do is shortlist best-fit candidates, as recommended by Badiyajobs' algorithm, and sit back, while Badiyajobs facilitates interviews using technology.

The online hiring space has lately seen a surge of entrants who are increasingly becoming the go-to platforms for job seekers and recruiters alike. Mobility has also played a significant role in cutting down the turnaround time and driving high efficiency.

Online marketplace for entry-level and blue collar jobs Aasaanjobs raised $5 million in a Series-A round of funding in November 2015. Babajob, through its RapidHire platform, drives inbound phone calls from screened candidates to employers. The startup secured $10 million in funding in April 2015. Bengaluru-based job portal Hiree, which raised Rs 18 crore from IDG in early 2015, recently got acquired by cross-category classifieds platform Quikr.