Ahmedabad-based Oizom tells people all about the air they breathe 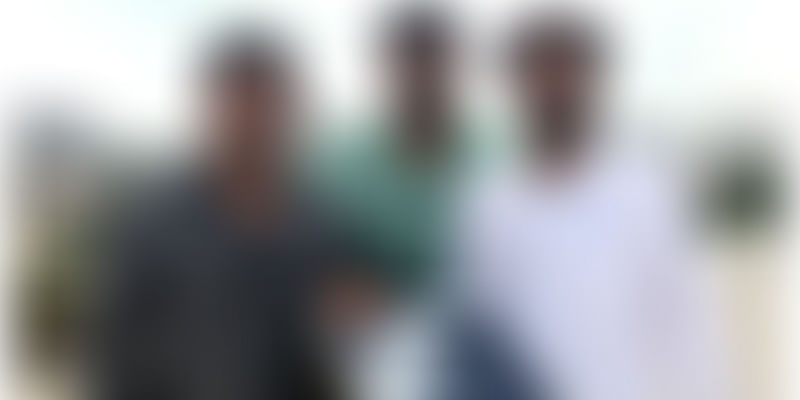 As it turns out, what you can’t see can hurt you. A recent report stated that thirteen of the world’s top twenty most polluted pockets are located in India, and it’s time we opened our eyes and sharpened our radar to the invisible poison that grips us. Doing the latter for us, in an extremely energy and space-efficient manner, is the Ahmedabad-based trio that we know as the creator of the Air Quality India app, under the umbrella of Oizom. Unleashing the power of IoT on air quality monitoring, the clean-tech startup has released a host of new products that monitor, inform, analyse and, in the future, stand to improve the air quality in the country. The company also recently became the only Indian startup to be chosen in Sparklabs’ new accelerator batch for Smart Cities and IoT.

Co-founder and CEO Ankit Vyas is a mechanical engineer with a product designing degree from NID, coming with over five years of experience in business, having previously co-founded ventures like Wellcrow Photogears, Cosire Innovation and IQM Corporation.

CTO Sohil Patel, an electronics engineer from Nirma University, has four years of experience in IoT products, previously having worked with Google India and Azoi Inc. Vrushank Vyas, the CDO, is a post graduate in interactive media and design from MIT Pune, with a background in mechanical engineering. The three went to school together, and have known each other for sixteen years.

Brought up in Vadodara, they spent everything from holidays to summers in Ahmedabad, which is amongst the top ten most polluted cities of India. Grappling with breathing problems rather often, the city never let the trio forget about the cloud of unhealthy air that engulfed them. But not everyone was so mindful of the invisible toxins they were taking in, which made the idea of "knowing what you breathe" so imperative. They experienced an instant rush, followed by a resolute decisiveness for healing the world, when they stumbled upon an air quality monitoring solution that was scalable and sustainable, unlike the current solutions that had exorbitant costs, occupied immense space and consumed considerable energy.

Change is in the air

Under the umbrella of Oizom, an ecosystem for environmental monitoring, they crafted their first product - Polludrone. It measures various parameters of pollution like PM2.5, PM10, SO2, NO2, CO, O3, VOCs, hydrocarbons and noise at a low cost, without spending any energy or requiring any infrastructural changes.

“As a solution, Polludrone is a fully solar powered, low cost, ambient air quality monitor. It fits into existing infrastructure (retrofit) and does not occupy any space or manpower,” explains Ankit.

Airowl is a community project by Oizom, in association with India OpenData Association. An open source project to create awareness about air quality amongst citizens, it is a D-I-Y kit that anybody above ten years of age can assemble, which helps them build their own personal air quality monitoring device. The device would give you real-time air quality data on the app they have built, the Air Quality India App, and update you about the air that you are breathing. The Air Quality India App, on the other hand, that first relied on open source data for information, will now collate air quality data from all across the nation where Oizom devices are installed. It also fetches data from other open devices, i.e. monitoring stations from the central and state pollution control boards. The app has seen more than 5,000 installs on Android and IoS.

Making ripples in the air

Polludrone targets smart city execution companies like PwC, Wipro, E-smart Technologies and the Tata Group. They plan to acquire customers through joint ventures with these companies, apart from the industrial sector through the pollution control board, industrial association board and direct marketing. “With rapid urbanisation, there is a dire need for city-level infrastructure to facilitate air quality monitoring, in order to take data-driven decisions and create policy-level changes for a sustainable ecosystem. Therefore, we believe entities associated with smart city infrastructure are our primary valuators. Moreover, NGOs and corporate CSR activities in the green-tech domain are also potential valuators,” says Ankit.

Oizom has installed 50 Polludrones across the nation so far. And the company’s open source initiative Airowl has been shipped to more than 50 citizens. “A challenge that lies ahead of us is the lack of introduction to sensor-based IoT technology. Introducing a new technology always creates a bit of skepticism amongst users,” he says.

The global air pollution monitoring device market is valued at $15 billion, and is increasing at a CAGR of 7.5 percent. In India, the market is pegged at $1 billion, with a CAGR of 10 percent.

Last week, Oizom became the only Indian startup to be chosen in Sparklabs’ new accelerator batch for Smart Cities and IoT. Sparklabs’ Internet of Things Accelerator will host 14 startups from 6 countries, and has a $35million fund for them. The program, based in Songdo, South Korea, will offer the startups funding, mentorships, an office space and direct access to investors and venture capitalists.

With the increased exposure, team Oizom is planning to scale up and try to encompass the industrial monitoring market as well. Their R&D team is also working on the monitoring of elements like radiation and UV light. “We are developing an advanced version of Polludrone that shall cater to special needs such as odour control for places like sewage treatment plants,” Ankit lets on before signing off.