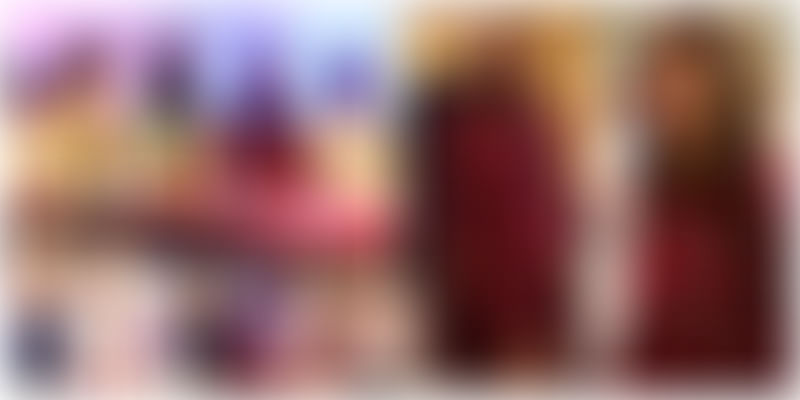 A movie that earned Rs 450 crore at the box-office portrayed the struggles of Indian women wrestlers Geeta and Babita Phogat. With the country’s first gold medal to her name, Geeta reveals her journey, struggles and the vision for a women-empowered India

Indian cinema witnessed startling success a few months ago when Aamir Khan-starrer Dangal broke several box office records. With Rs 450 crore in its kitty, the movie based on the real-life story of small town girls Geeta and Babita Phogat was welcomed with open arms by the entire country. It has been seven years since Geeta Phogat won her first gold medal in freestyle wrestling, but the movie turned the sister duo into celebrities and an inspiration to many. Behind the curtain raisers, page 3 appearances, and social media fan following, their dreams and ambitions still remain strong. In an interview with team YourStory, Geeta gets candid about her Olympic dream, her father, and empowering today’s women.

Hailing from the state of Haryana, notorious for its high rate of female foeticide and regressive khap panchayats, Geeta and Babita are the daughters of Mahavir Singh Phogat, a former wrestler himself. Mahavir and his wife Daya brought up their four daughters Geeta, Babita, Ritu, and Sangita alongside Vinesh and Priyanka, the daughters of Mahavir’s late brother. In a country that is battling gender issues by the dozen, the Phogat family stands as a testimonial to women and their success stories.

Mahavir, who quit his job to take a personal interest in the training of his daughters, relived his wrestling dream through their eyes. Geeta says,

Every child in his or her childhood has no dreams as such, but rather feed off of their parent’s dream, and so did we. Parents’ dreams succeed over their kids, their choices streamline our lives. We had a very hard training during our childhood, and I don't want to live it again. There were so many times when I felt like running away from the akhada. In our case, we understood my father’s dreams only when we reached senior levels of wrestling and experienced the struggles and sacrifices it brought along. He has transformed and uplifted our lives, and we are glad that he has.

The world of wrestling is full of competition, bruises and aggression, thus making for a fast-paced and electric thriller for a movie audience. But a lot goes into preparation for every wrestler before she surrenders herself to the sport. Today, it must seem odd that the Phogat sisters are celebrities, for the most part, because of the stunning success of the movie based on their triumphs, rather than because of those triumphs themselves. When asked about the movie, Geeta quips,

I am getting recognised only today for what I did in 2012 (won a bronze at the World Championship) or 2010 (won gold at the Commonwealth Games). Obviously, it feels a little bad that we are not being recognised for our wrestling but because a movie was made on our lives. But we are not complaining; the experience is overwhelming.

In a recent yoga camp conducted by yoga guru Master Akshar in Bengaluru, where Geeta and Babita were the chief guests, Geeta took over the podium to empower the women participants.

Girls have time and again proved that the sky is the limit. Women must not consider themselves weak and remain victims; we all need to find new ways to bounce back, be it yoga or self defence. These exercises prove to us our inner strength, she said.

Speaking at the camp, MLA for Chikkaballapur, Bengaluru, Dr Sudhakar K announced the allocation of two acres of land to the Olympians to set up a wrestling academy.

Also read: All set to watch Dangal? Here are 5 things everyone can learn from the real Phogat family

If you have to achieve something, sacrifice becomes your first friend. Making time for your dreams is the first step. When we fall sick, we make time to take rest, so why not make the time to stay fit instead, said Geeta, encouraging women to remain self-reliant and healthy.

The 28-year-old wrestler, who is under pressure to make a comeback at the upcoming 2020 Tokyo Olympics, said,

In between all the events and training sessions, the sportswoman recently married fellow wrestler Pawan Kumar. The girl from Haryana, however, has no plans to hang up her boots just yet and is aiming high after the ringing the cash registers saw at the box office.

I am under a little pressure as I am making a comeback after a long time, but I am confident as I have a very strong base and never shy away from my training. Sometimes, it boils down to a move or two, and that makes all the difference. One never knows how a bout is going to pan out, and even in the last two or three seconds, things can change. It's all about applying a technique. And I am working on it, she explained.

Between a raw Haryanvi accent and all the spotlights and interviews, the Phogat sisters have redefined women power. Today, when one looks back at their journey, it surely stands out as a testimonial to the power of hard work and perseverance, especially when backed with the right support. As we wind up a crisp interaction with Geeta, let’s just hope that in some corner of the country, as another girl prepares for her next bout, she is set to go on a journey that puts the country on a global pedestal.