Weatherwise & otherwise, Bengaluru is the place to be to ideate, innovate, invest in Karnataka: Priyank Kharge 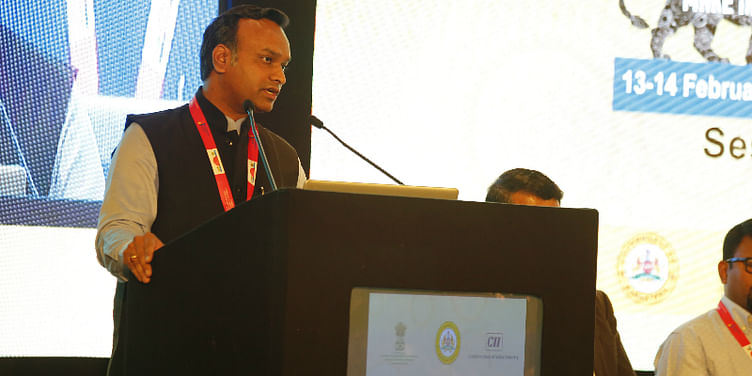 Kharge noted that because of rapid developments over the last few years, the whole world is now looking at India with a renewed focus. He recalled hearing a minister say, “If you are a wise man you will invest in India and if you are a wiser man, you will invest in Bengaluru.” Kharge made it a point to mention that this statement was in fact made by a member of the opposition and joked that it was great to get validation from them.

Kharge said that while the government and IT department have always focused on innovating, inventing, and investing in Karnataka, he believes that to be successful, there must first be ideation. He said,

If we didn't have this environment, Bengaluru wouldn’t have been home to the 7,000 startups that are playing a disruptive role in our economy.

2. It's possible, but it's not worth doing

3. I knew it was a good idea all along

Drawing a parallel with this, Kharge asked the audience not to spend so much time pondering over an idea that it slips past them. He said, “I am harping on ideation because it is the first step towards innovation. The Government of Karnataka is probably the only one in the country that has recognised this and incorporated this (ideation) to introduce the country's first multi-sector startup policy with a bottom-to-top approach to ensure that innovation breeds at the bottom of the pyramid.”

He stated that the government helps early-stage startups by providing plug-and-play facilities for a year, access to mentors, and capital up to Rs 3 lakh to worthy ventures. Taking stock of the current situation, he shared,

We have had about 74 working prototypes, 17 company incorporations, and two patents with this approach.

To catch entrepreneurs young, the government is also working towards fostering ties between R&D centres and higher learning institutions. Kharge noted, “We have 600 seats across four incubators spread across the state, out of which more than 70 companies have graduated.”

Talking about the long-term focus Kharge said that if any startup has the potential to be disruptive, the government is ready to give them space at any of their warehouses, incubators, or accelerators and also up to Rs 50 lakh. He aims to foster similar partnerships with more centres and onboard more private educational institutions for this initiative. Lauding the efforts of Bengaluru-based unicorns like Ola, Flipkart, and InMobi, he voiced his desire to see more such companies emerge from the city.

Kharge also pointed out that there is a general misconception that the government is a maze and officials are hard to get hold of. To better facilitate interactions between startup folks and government stakeholders, the state government has a startup cell where relationship managers assist startups with everything from company incorporation to IPR. He said,

We have a corpus of Rs 200 crore to ensure that innovation happens in Bengaluru.

Focusing on the financial aspects, Kharge claimed that the government looks beyond verticals like e-commerce and IoT and also has a bio-venture fund of Rs 50 crore, estimated to be the largest of its kind in the country. There is also a focus on other sectors ranging from agriculture to aerospace. Kharge emphasised that the government realises that it is not just about creating infrastructure with tech parks but also ensuring that people have adequate skillsets in emerging technologies. To ensure this happens, the government is coming up with a whole set of centres of excellence for different verticals.

Open houses with the government

Kharge noted that the government is also thinking out of the box to groom 20,000 startups over the next few years. To better facilitate this, the government hosts monthly open houses where startups can share feedback with the government and request for policy changes or share their grievances. Talking about the thriving ecosystem and the inspiration one can draw from it, he stated,“It is not just about specific startups but also how the ecosystem allows one to dream much more than what one can actually do. We have startups like Team Indus, which aims to put a robot on the moon.”

Kharge noted that part of Bengaluru's success can be traced back to friendly policies (IT) and the focus on emerging technologies that have been put in place by the government. He said, “Everybody has agreed that Bengaluru is good but nobody is saying that the government is providing the ecosystem through timely policies.”

Kharge laughingly said that while the government might not have been 100 percent supportive in every way it does deserve some credit for the progress. He said, “I request the entrepreneurs to credit the government once in a while because we also need your support to grow further.”

Kharge noted that one of the aims is to ensure Bengaluru moves away from its old image of simply being a hub for IT-enabled services. He said,

We were (at one stage) the back office operations of the entire world. Now it is time to relaunch and rebrand Bengaluru as the next destination for startups and enterprises.

Quoting the recent World Economic Forum report that listed Bengaluru as the most dynamic city in the world, Kharge noted that the city has been able to go from being a pensioners’ paradise to the most innovative city in the world. He said,

The government believes that it is not just about ideas, but making ideas happen and we are future-ready not just for Karanataka but for India as well.

Kharge then requested Shailendra Singh, Joint Secretary and CVO (Chief Vigilance Officer) at DIPP, who was on stage with him, to grant the state government Rs 1,000 crore from the Rs 10,000 crore innovation fund. Kharge joked that he had heard that the central government is having challenges spending the money and then made his case for Bengaluru and Karnataka and noted that apart from everything he had spoken about Bengaluru, smaller towns and cities like Mangalore, Udupi, Mysore, and Hubli are upcoming innovation hubs too. He said,

In IT exports they clocked Rs 4,000 crore in 2016 and were also able to raise $25–30 million from venture capitalists. So innovation is happening everywhere in the state.

After his passionate appeal to the central government, Kharge thanked everyone from different parts of India and the world for making Make in Karnataka a success and said,

Weatherwise and otherwise, Bengaluru is the place to be to ideate, innovate, and invest in Karnataka.