A taste of UP in namma Bengaluru: life and times of golgappa sellers 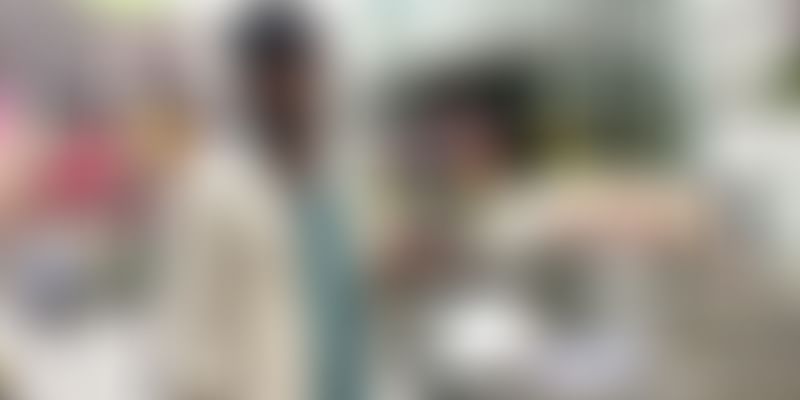 With double profits and better living standards, migrants from far-off villages in Uttar Pradesh dominate the golagappa trade in Bengaluru.

Thirty-year-old Anirudh Kumar came to Bengaluru from Etawah, a district in Uttar Pradesh, for fun and travel just three months ago. His journey across the states was not prompted by majboori, helplessness, rather a decision made out of jazbaat, passion.

He had no idea he would be selling golgappas on the streets of Bengaluru for he mostly travelled to see places. It was only when his close friends asked him to lend a hand in their business that he decided to stay for long. He thought, “I am not losing anything by selling golgappas. I might as well earn some money while travelling.”

Anirudh, like scores of other migrant vendors, works under an owner/‘maalik’ who houses them, feeds them, and provides resources to run their business.

Economics of the trade

Call it unhygienic, unhealthy, or a stairway to stomach ache—if you taste it once, you are unlikely to say no to the next. The mashed potatoes mixed with spices, chillies and chickpeas, combined with crispy maida balls and tamarind water makes golgappa irresistible. And if you thought this was an easy trade, think again.

Our day typically starts at 5 am and it involves boiling potatoes, making the dough, frying puris, and drying them. This way the input cost and effort put into the preparation of puris and mashed aaloo is all shared. The owner pays us Rs 4,000 every month. We are a team of four friends who stay together and prepare golgappas together, explains Anirudh who operates from his stall on the MG road.

Ignorant about the input cost of the trade, most migrant golgappa sellers are making a living out of the salary given to them by their owners. Their daily earnings go directly into the pockets of the owner—whether they serve 20, 50, or 250 customers. While the owner sponsors the input costs of golgappa ingredients, the only indirect cost bore by these vendors is the bribe they pay for a place to set up their business.

"Since this is a highly commercial area, we have to pay Rs 60 every day to the police as hafta (bribe) who in turn steer away from bothering us. Apart from that the business dynamics are pretty smooth and we have no other problems," Anirudh adds.

Anirudh, however, is skeptical about his future business given the fast approaching monsoons. The stalls get wet and customers don’t venture out in the streets too often, he explains. However, few street vendors have found a way to continue their profit margin by installing an additional protection weapon to their stalls—a giant outdoor umbrella.

Hailing from Jalaun in Uttar Pradesh, thirty-year-old Ajay was resting under a huge umbrella that sheltered him and his stall from the incessant Bengaluru rains when we spotted him. He deems the business to be profitable for both the vendors and the owner.

I earn Rs 6,000 every month. Since the housing and ration needs of me and my family are taken care of by my maalik (owner), I end up saving more here. The owner even provides for my children’s school fees. Back in my village, they sell eight puris for Rs 10, and here we sell six puris for Rs 25, Ajay said.

While he used to earn more with his previous job at a tent house factory, the additional facilities provided by his present owner, apart from the steady salary, is his main reason to continue in this trade. The owner mandatorily provides shelter, clothing, ration, food and other recreational facilities to all his employees; hence, these vendors are devoid of the hassles that come with migrating to a new town and they end up saving almost their entire salary.

Unlike most vendors, Ajay dint pay any bribe to set up his stall. Explaining the space dynamics involved in the trade, he says that if an individual is successful in securing a spot and attracting customers first, he can claim that spot as his own. “And this is what owners typically do,” he adds.

Ownership, profit, and starting off on your own

At a young age of 24, Virender heads the family run business of vending golgappas, in Sahakarnagar, a residential colony in North Bengaluru. He belongs to Meja village near Allahabad. “My cousins and brothers are all in this trade. I end up saving about 15,000 every month if everything goes right,” says Virender. He is, however, reluctant to share how much his other family members earn.

Since most vendors who work under owners have no idea about the profit the latter derives, they seem to work without any complaints or demands. But Virender’s case explains how bigger owners, who initially invested in the trade, end up making almost thrice the amount of money other vendors earn.

Most of the owners, like Virender, are also migrants who settled in the city decades ago and know the dynamics of the trade better. On an average, these owners run four to five vending stalls through migrants as they are the source for cheap labour.

Moreover, the owners make frequent trips to towns and villages to build their network, with the hope to convince more friends and villagers to partake in this trade. The glamour of the city and easy money along with housing benefits becomes the main attraction for villagers who get lured into this trade.

Anirudh says, “I am staying in this business and in Bengaluru till Raksha Bandhan, since my owner has a shortage of boys now. Once they come back from the village, I will head back.”

The rates of golgappas are slightly cheaper in the suburbs and residential areas compared to the crowded business streets. Deepak who sells in JP Nagar in South Bengaluru has priced six puris at only Rs 20. His story is also different from many vendors who work under owners for long before gathering capital to start off on their own.

He started his own stall for mere Rs 5,000, just three months into the trade, as he got help from his village friends who are now working in the city.

I don’t travel anywhere else. For me, it’s just my room and my business which earns me around Rs 6,000 every month. But I do long for home and hope to visit if I save enough after bearing my overhead costs, says Deepak.

Ajay stated that a minimum lump-sum of Rs 50,000 is required to set up one’s own golgappa trade, as a large part of the money is spent on securing and renting a housing space. “I need to save enough to take care of my boys, the way my maalik takes care of us now. We all live in a big apartment with individual rooms and flats. I will call my friends from my village after I have the money to host them,” he adds.

It’s more lucrative in Bengaluru for these migrants

Ajay cites the lack of continuous employment and less savings as the reason for migration. Most of the migrants are farmers who travel to the city during the ‘off-season.’ Though they are aware of the government jobs and schemes, the money is often not enough for sustenance. Hence, these individuals choose to be part-time farmers.

The agricultural work in our village is seasonal. I do stay back longer and contribute during harvest time, but once the cultivation season is over there’s nothing much to do. Moreover, I end up spending whatever little I save there—one trip to the market is enough! Here I save enough to even send some money home. Just 20 days back when I visited, I gave my father a sum of Rs 10,000 and contributed for my cousin’s wedding as well, Ajay shares proudly.

However, a longing for home hasn’t left Anirudh ever since he came to Bengaluru. “I am now staying here against my will,” he says explaining how he had to enter the trade for survival. Moreover, his family of five brothers and four sisters, who are mostly into farming and NREGA jobs, aren’t aware of him selling golgappas. He fears they are going to call him back to do “kheti baadi” (farming) if they ever find out.

Bengaluru has accommodated us well

Almost all the golgappa vendors we spoke to in Bengaluru said they had no issues in adjusting with the social fabric of the city. “Nobody discriminates because of language. In fact, everyone is friendly and I have never felt like an outsider,” said Deepak.

Ajay, at Lavelle Road, says, “I have learnt limited answers in English with which I manage to serve even English speaking customers and hence that’s no issue,” he quips.

In the rush of the fast-paced silicon city, these migrant golgappa vendors make a tiny population who have amalgamated well with the pulse of Namma Bengaluru. So, the next time you stop at a golgappa stall, take some time out to say hey and talk to the vendor whose delicious snack tickles your taste buds.